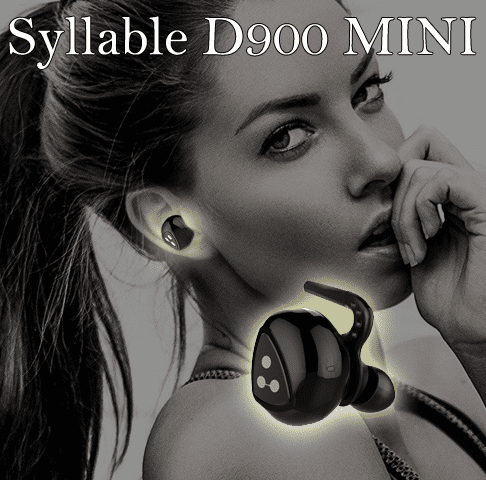 Since September 13, 2016, Amazon has been offering the Syllable D900 MINI in-ear headphones. There are now numerous reviews as well as official tests in specialist magazines for this apparently very good AirPods alternative. So there are good reasons to take a closer look at the product. What are the Syllable D900 MINI headphones and what are they really like? a cheap alternative to the Apple AirPods?

The Syllable D900 MINI in-ear headphones have many advantages, but also some negative points. A summary can be found here; Image source: Amazon

There are currently 28 reviews on Amazon, 21 of which have 5 stars. Three other ratings are under 4 stars. What you come to, however, depends on whether you just want a pair of wireless in-ear headphones for the iPhone, or whether you want to buy a cheap alternative to Apple's AirPods. Because for the latter, the plugs from Syllable are still missing a few properties.

According to customer reviews, the sound of the headphones is very good and the two different attachments make them comfortable to wear for both small and large ears. Under the heading "Upper class headset", a user has, among other things, the "The finest listening pleasure“Praised. Since each headphone weighs no more than 5 grams, longer wearing is no problem.

Comparison with the Apple AirPods: Some functions are missing

Due to the construction as in-ear headphones and the bracket, which the Syllable D900MINI also sit tight many activities are possible with these headphones. Jogging, for example. As already mentioned, other advantages are the carrying comfort, the sound with good bass and the charging box. However, there are also a few points that can have a negative impact on the user experience.

Apple AirPods: Wireless headphones with lots of technology, their own processor and mobile charging station

For example, there is only one button to turn it on and off, take calls and play music. What is missing is a volume control (must be done via smartphone) and the option to Crab to be able to use. There are also no sensors like the Apple AirPods that recognize when to take off the headphones and put them back in. In addition, the battery life is less than that of the AirPods. As Alternatives the in-ears described here cannot really be called.

If you go jogging for two hours and want to transfer music from your smartphone via Bluetooth, you will surely find a very good solution here. Who after a cheaper replacement for the Apple AirPods is looking for, they are not adequately served with these earplugs. There are many functions that should make it possible to leave the iPhone in your pocket. Should you be interested apart from that, then click here once.