After I received the press release from TerraTec yesterday that they are bringing three new Bluetooth loudspeakers to the market with the new "Concert" product range, I asked for a test copy without further ado, which came into the house a day later - one would want such a service more often ! I don't know exactly why, but somehow Airplay and Bluetooth speakers have been fascinating people for ages. These often small boxes now produce so much sound that one often wonders where it comes from. For this reason I was very excited about the "Concert BT Mobile Booth", which is only a bit larger than an iPhone 5 in terms of its footprint (when you put it on the table).

The TerraTec Concert BT Mobile Boost next to my iPhone and the obligatory cup of coffee, which should not be missing in the product test (Photo: Sir-Apfelot.de).

The technical data of the Terratec speaker system are quickly explained:

Handling and sound of the Concert BT Mobile Boost

I admit: I'm not a fan of manuals. I would rather try it for 10 minutes than read the manual for 5 minutes. That may be nonsensical, but as a rule one understands technical devices quickly if their use is not planned in a very clumsy way. It was correspondingly easy with the TerraTec loudspeaker: There is a power button on the back. Of course I pressed it to turn on the speaker. Since there was no pairing button with which you can put the BT speaker into pairing mode, I tried the trick of holding down the power button. Lo and behold: after a few seconds it reports that it is now in pairing mode and is waiting for Bluetooth devices that want to connect. A click on the Bluetooth setting on the iPhone then immediately showed the "BT MOBILE BOOST", which I then connected.

The control panel of the TerraTec Bluetooth loudspeaker has a touch-sensitive surface in which the buttons light up - very stylish (Photo: Sir-Apfelot.de).

In short: Less than 30 seconds after unpacking, the speaker was already connected to the iPhone and could play the first test song. This time I chose "A misogynist AC / DC piece"decided and was not disappointed! The sound is very good for the little one! The volume is easily enough to quickly listen to music in the living room or to listen to music or a podcast in the bathroom while showering. As always at this point: We speak here from a small speaker system, which of course CANNOT produce the sound of large floorstanding speakers, but if you already have experience with the Jawbone Jambox (here my test report), then you will quickly find that with the TerraTec Mobile Boost you have found a Bluetooth speaker that has a very good price-performance ratio. I find it particularly good that it is not as bass-heavy as some of its competitors, because too much bass is very annoying, especially when listening to stock books and podcasts, because you only hear grumbling, but poorly understand the speakers.

On the back there are buttons, power on / off (and pairing!), A microSD card slot, an aux-in for a jack cable and a USB micro-B plug to charge it (photo: Sir-Apfelot. de).

I had the loudspeaker with me for testing, both at the breakfast table to listen to podcasts and in the living room further away in the corner and turned it up at times. The sound is clean up to halfway up the volume setting and is then so loud that you can still talk, but it should be a little less loud so that you can talk undisturbed. Up to 3/4 of the slider it is already so loud that you don't really want to turn it up any further. The sound is then a bit weak on the chest. You can hear that especially at full volume, because it then becomes very weak in the bass range. In this area, the larger Bluetooth speakers score again, but they are also less mobile. With the TerraTec, you don't hear a clatter even at high volume - that has to be noted positively.

Conclusion of my test report

With its integrated battery and its size, the TerraTec Concert BT Mobile Boost is definitely very well suited to be placed next to you on the desk or to take with you to the bathroom or to the breakfast table. It scores with small dimensions and a very good sound for its size. If you like to listen to really loud music, you should rather look around for larger bluetooth speakersthat still offer plenty of bass even at high volume. In my opinion, it is perfect for listening to music at room volume and for podcasts, audio books or sound reinforcement when cooking.

The mobile Bluetooth loudspeaker from TerraTec is already on the market, so you can find it at Example on Amazon. 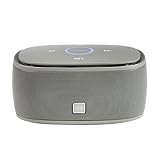 TerraTec Concert BT Mobile Boost
The small Bluetooth speaker from TerraTec offers 5 hours of mobile music enjoyment and an integrated hands-free system that can also be very helpful in the car. The price of just under 70 EUR is quite appropriate for the small speaker system with good sound.
Buy it at Amazon Price includes VAT, plus shipping costs (updated: 11.01.2022 at 11: 40 clock)
-