In the test: Anker Qi-Charging Powerbank with USB-C input and 10.000 mAh

A few days ago I received a new power bank from Anker with the model number A1615 and the sonorous name "Powercore 10K Wireless". I had heard about the launch of the power bank here already reported. But now it's time to take a closer look at the device.

The power bank was provided to me by Anker free of charge for the test. However, there is no operation associated with this. Anyone who reads my tests regularly will know that I already have products like the Anchor Soundcore Wakey rated it very critically. So you can be sure that I won't praise a product over the green clover just because the manufacturer gives me something free of charge. 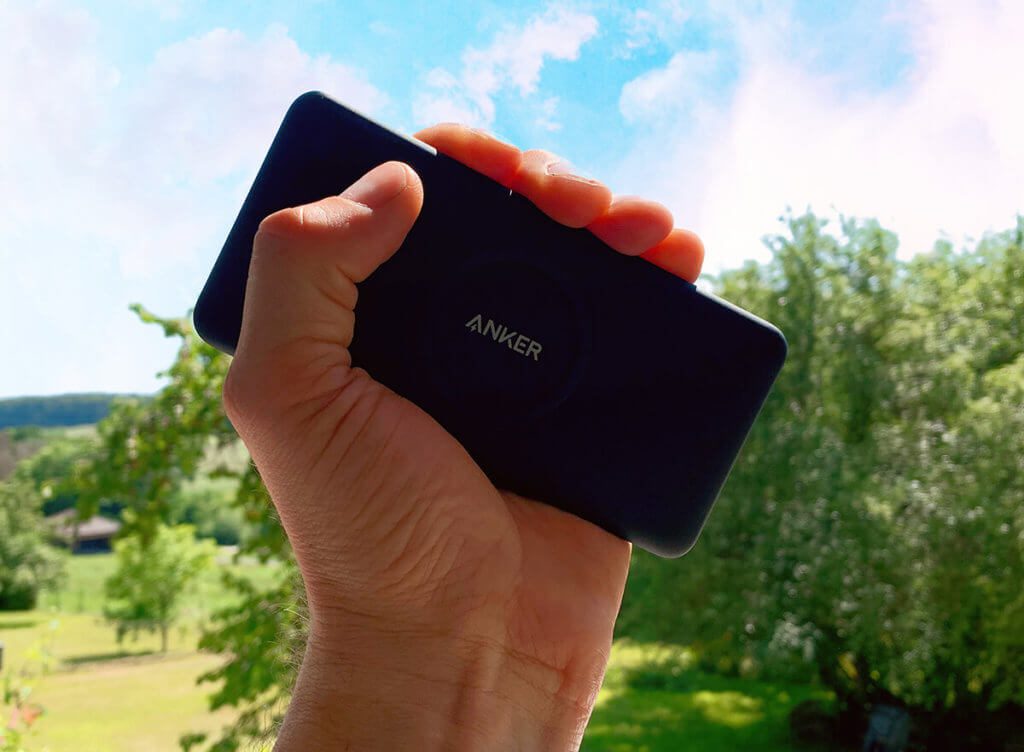 The Anker PowerCore 10K Wireless offers wireless power for on the go - more on this in my test report (Photos: Sir Apfelot).

For people who don't just pay attention to the design, I would like to briefly mention the technical data as they can be found on the manufacturer's website: 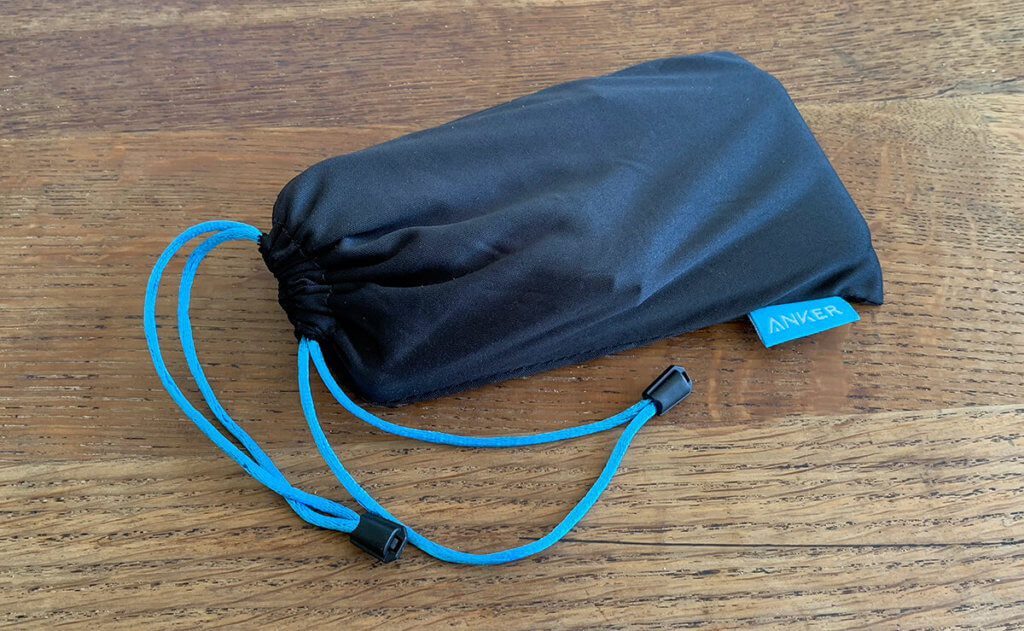 In addition to the power bank and charging cable, the scope of delivery also includes a fabric bag that protects the device from dirt and scratches.

Design of the PowerCore 10K Wireless

The power bank looks very nice: rounded edges, rubberized surface and clear control elements. The battery indicator is mounted quite inconspicuously on the side and shows the battery level with 4 blue LEDs. On the opposite side there is a small button that can be used to trigger Qi charging. 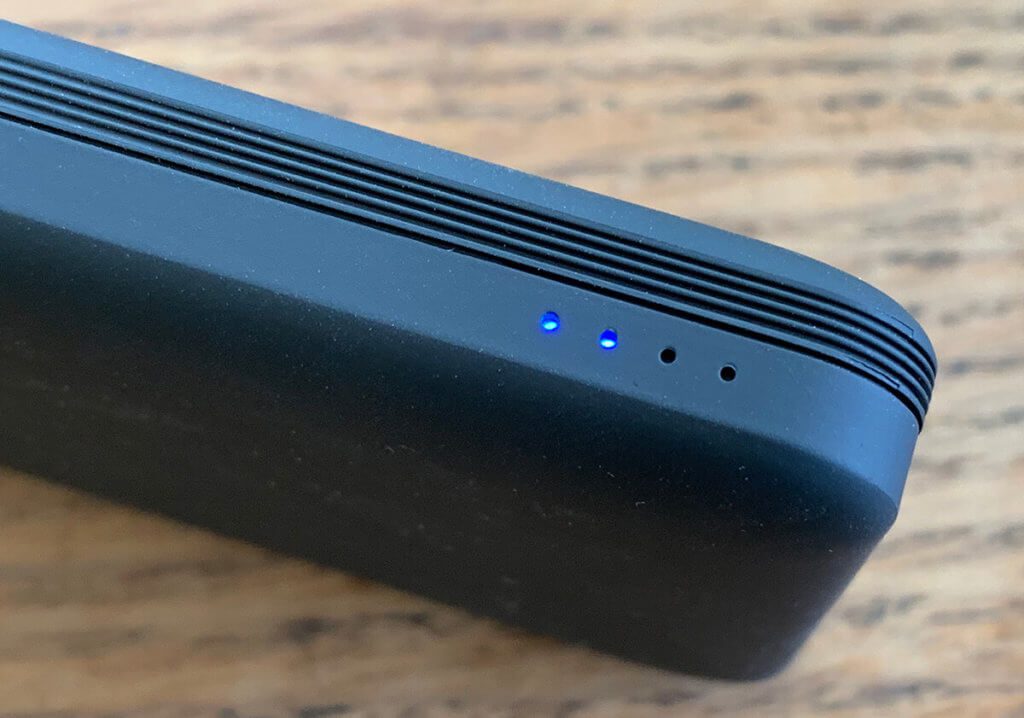 Four LEDs indicate whether the power bank is full or whether it is being charged.

A small side effect of the rubberized surface shows that the power bank is a small dust magnet. However, if you wipe it over the jeans, they are sparkling clean again. As far as I am concerned, this is not a big problem, but at least I wanted to mention it. I assume that cleanliness fanatics don't have as much dirt in the house as we are doing while renovating.

iPhone models that can charge Qi

The power bank is actually only of interest to people who also have devices that support wireless charging according to the Qi standard. Of course, not only iPhone models can do this, but Android smartphones as well, but I don't want to go beyond the scope and only mention the iPhones that can be charged wirelessly with the power bank: 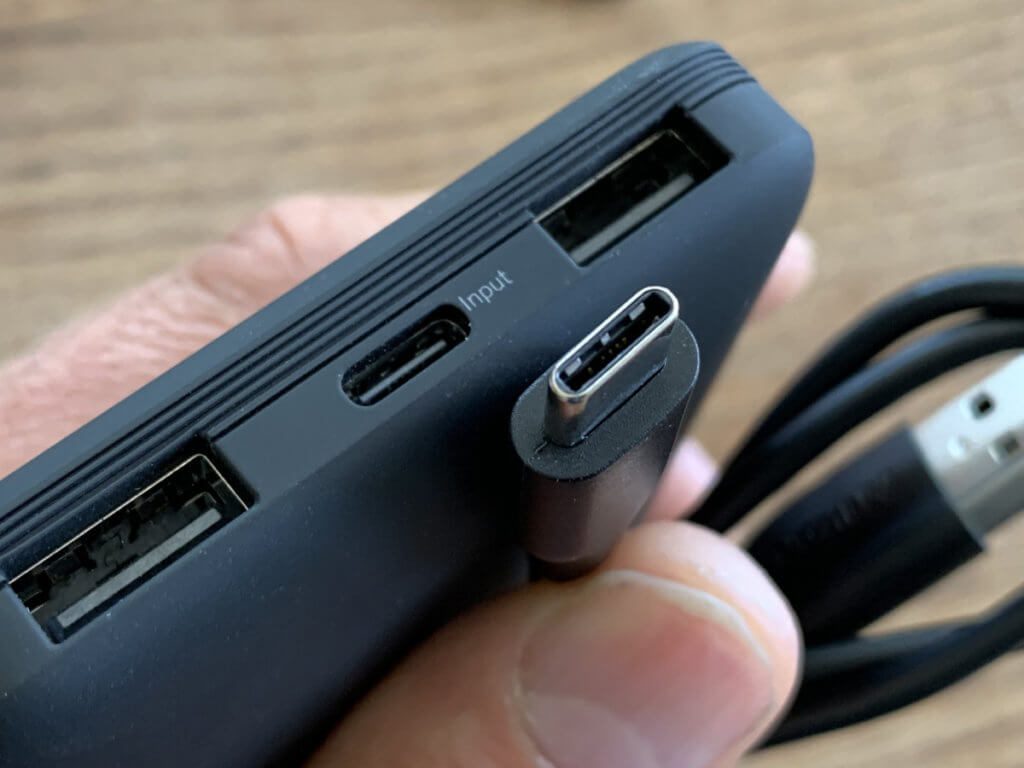 The USB-C port only works as an input. iPhone or iPads can (unfortunately) not be charged with it.

No USB-C output, no USB PowerDelivery

To get straight to the point: the power bank is less suitable for iPad owners - due to its capacity alone. I would rather use a 26.800 mAh power bank. Is recommended here the set consisting of the PowerCore +26800 PD and the 60W USB-C power supply from Anker.

The second point that speaks against using it with an iPad is the lack of it Support of the USB PD (PowerDelivery) standard. This means that the power bank charges the device “only” with 5 volts and does not adjust the charging voltage if the device could handle a higher charging voltage. Current iPhone and iPad models as well as MacBooks work with Qi charging and thus allow faster charging.

The fact that the PowerCore 10K Wireless does not support USB-PD only means that the devices charge a little slower than they could. The Apple power supplies for iPhone often do not offer a USB PD either, so that some users may not even know that it could be faster.

It is a bit of a shame that the PowerCore 10K Wireless can only be charged via USB-C, but the USB-C port does not provide any power. There are other power bank models here (see here ) that can charge devices via USB-C. 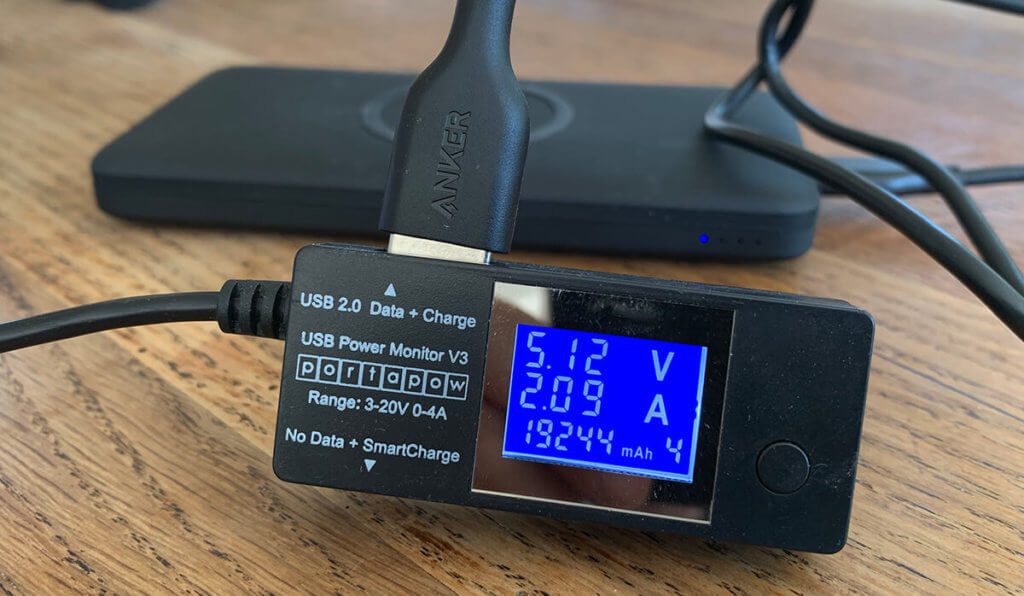 The Anker PowerCore 10K Wireless Powerbank charges itself quite quickly with around 10 W of power.

Pass through: simultaneous charging while charging is conditionally possible

What is often asked: Can the power bank charge other devices at the same time while it is charging itself? The answer: yes and no - it can only pass through loading to a limited extent. I charged it and at the same time charged my iPhone Xs via Qi charging. It worked so far.

However, charging the external devices via cable no longer works. As soon as the power bank itself is charged, it switches off the USB-A outputs - but wireless charging can still be used.

The Qi-Charging Powerbank does not matter whether you have a thick case or no case on your iPhone. Only metal should not be included (photos: Sir Apfelot).

I ran a few tests on my iPhone XS and iPad Pro (12,9 inch). I have the values ​​with the app CoconutBattery measured. The values ​​are not the same for all iPhone models, but they are a rough guide.

These values ​​are relatively normal. Even if 3 watts sounds like little, the value for Qi charging is not extraordinarily low. Of course, there are wireless charging stations that can charge an iPhone with 7,5 watts instead of 5 watts, but only 4 or 5 watts of that reach the iPhone.

Even my thick iPhone case does not affect the charging performance of the power bank.

If you really want to charge quickly, you should do without Qi charging and charge the iPhone or iPad with a power bank that supports USB-PD.

Please do not ask me why my iPad Pro (large model!) Only charged with 3 to 4 watts. I had discharged the iPad Pro to 42% battery status and yet the iPad only allowed itself little power. However, this is due to the iPad, because I had tried several power banks, but the charging capacity remained the same. 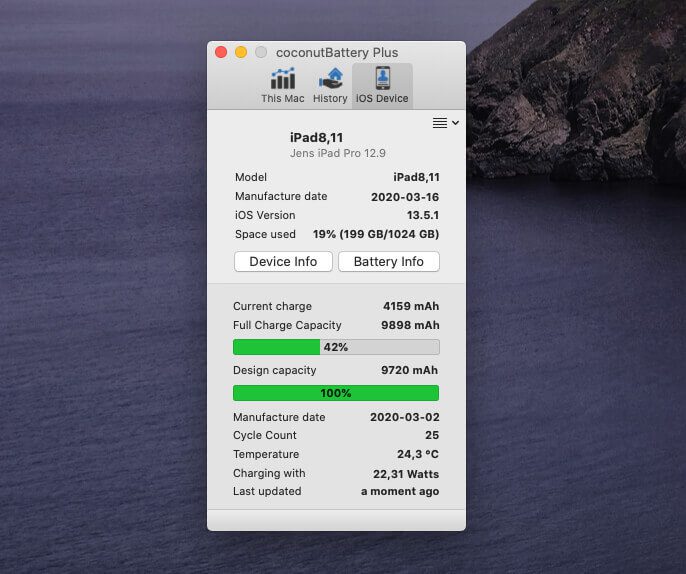 On the other hand, if you use a power bank with a USB PD, the power goes up to over 22 watts. You can easily charge the iPad Pro 4 or 5 times as fast as with a power bank that only offers a USB-A port as an output. For iPad owners it is worth taking a look at the PowerCore Essential 20000PD - twice as much capacity, charging of devices via USB-C with Power Delivery, but no wireless charging.

Shutdown of the USB ports at around 12 watts of power

With a USB load resistance I still measured when the power bank reached the maximum output power and switched off. This was achieved at approximately 2,5 amps and 4,9 volts. This corresponds to about 12 watts of power. When I wanted to call up even more, the PowerCore 10K Wireless closed the doors.

A USB load resistor can be used to test when the emergency shutdown of the power bank takes effect (photos: Sir Apfelot).

My conclusion on the Anker PowerCore 10K Wireless Powerbank

The device is without question a practical power bank with an attractive appearance and the main feature of wireless charging. If you spend the day with your iPhone and AirPods Pro, you can definitely take a look at the additional battery from Anker.

Of course you can also charge an iPad with it, but I see this as marginal in terms of capacity and charging performance. For these users, I would recommend other power banks that also support USB-PD and provide power via the USB-C output. 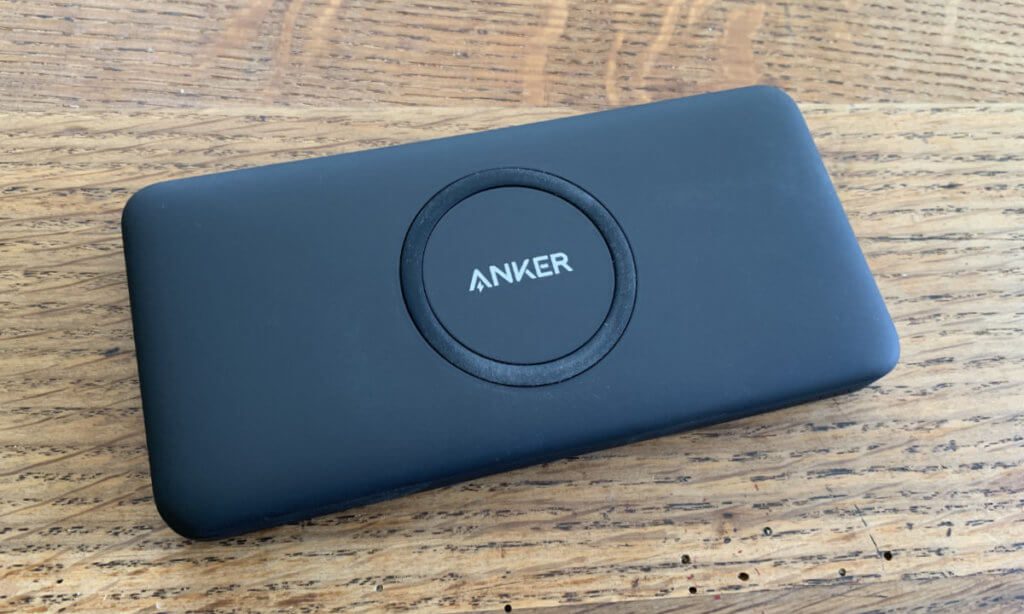 The Anker PowerCore 10K Wireless is handy and, at just under 200 grams, it is absolutely suitable for a backpack.

For me, the power bank will probably charge more often in my backpack when I'm out and about. The 26.800 mAh knockers are often too heavy for me and the 10.000 mAh of the PowerWire Wireless are not that important, but are still enough to bring one or the other device out of power-saving mode in an emergency.

When it comes to durability, I don't really care. On the one hand, Anker offers an 18-month warranty on the device and, on the other hand, it is built so robustly that it will surely survive even small falls.

If you want to look at or buy the Anker PowerCore 10K Wireless, you will find it here at Amazon or via this product box: