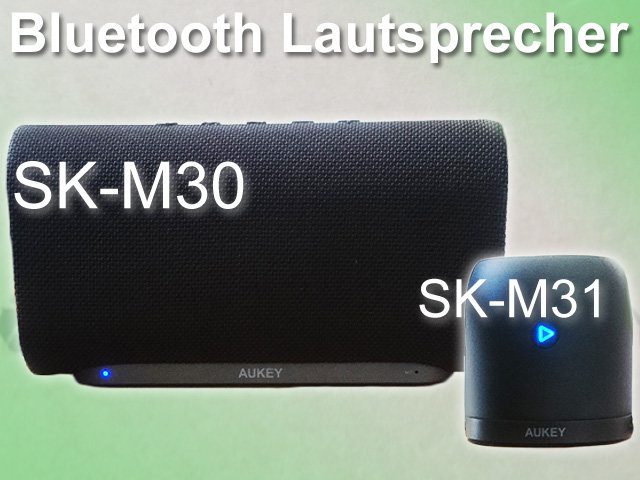 Bluetooth speakers are ideal if you want to play music or other audio wirelessly from smartphones, tablets, laptops, computers and many other devices. Well-known manufacturers such as JBL and Bose offer a wide variety of Bluetooth speakers, but also the electronics manufacturer who mainly operates via Amazon AUKEY. I have both Bluetooth speakers at AUKEY SK-M30 and SK-M31 requested and sent for a test or comparison. The fact that the products were free does not affect my test result. I would not have asked AUKEY if I hadn't already been through theirs anyway Power Bank been convinced. 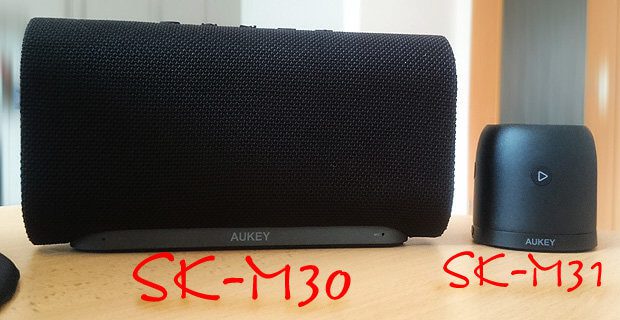 A brief introduction to the AUKEY loudspeakers

The AUKEY SK-M30 is a 11,5 cm high and 21 cm wide Bluetooth loudspeaker with a fighting weight of 800 grams and a depth of 6,4 cm. The two speakers built into it each bring 10 watts to the speedometer and the Li-Ion battery with 4.000 mAh offers around 12 hours of running time at medium volume. Operating display via blue LED. A great piece for the office, living room, party and vacation!

The AUKEY SK-M31 mini Bluetooth speaker is a compact model for on the go with a 6,7 cm diameter and a height of 6,7 cm. It weighs 178 grams and has a single loudspeaker built in, but this is only noticeable when listening to stereo songs with extreme differences between the left and right channels. Otherwise, the mini speaker is convincing, even with regard to the bass!

Before I get to the test itself, a few more dates. The large SK-M30 is also named as a product on the manufacturer's website and in the Amazon shop AUKEY Eclipse Bluetooth speaker. If the data briefly given above is not enough for you, then here is a more detailed overview:

And here again the same game with the data I was able to get hold of for the SK-M31 model. On the manufacturer side, this is also called AUKEY wireless mini speaker designated. Although this device is smaller and more inconspicuous, it has many more options for feeding in music. See here: 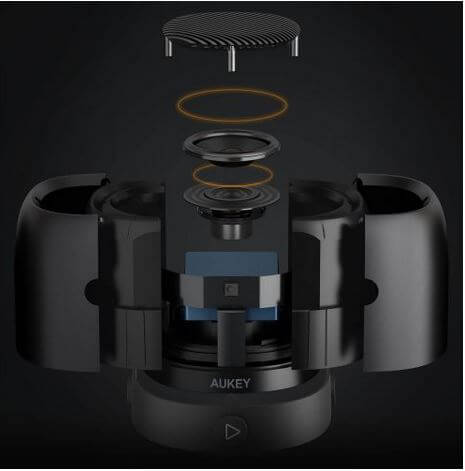 AUKEY sells the manufactured products primarily through Amazon. You can also buy the two Bluetooth speakers that I tested there. So that we have it over with before the test, I'll include the relevant shopping opportunities here. And without wanting to anticipate the conclusion: I can give a purchase recommendation for both;)

Now we come to the test itself. We shouldn't start with the conclusion, but what the heck: I think that both AUKEY Bluetooth speakers are real sound wonders for their size. I was particularly surprised by the little one who massages my arms while typing by allowing a lot of bass to be transported across the desktop. He even passed the hardcore test: I also like Queen's Bohemian Rhapsody from the one 5 watt speaker :)

Music used in the test

When I read through a speaker test, I am happy when this and that criticism is given for highs, lows or basses and the middle pitches, but I don't find that too meaningful. Sure, I can also confirm with the two AUKEY models that the highs are clear, the mids are not swallowed up and the bass pumps quite well. However, I would also like to show you which artists and bands I do to my complete satisfaction with both AUKEY Bluetooth speakers: 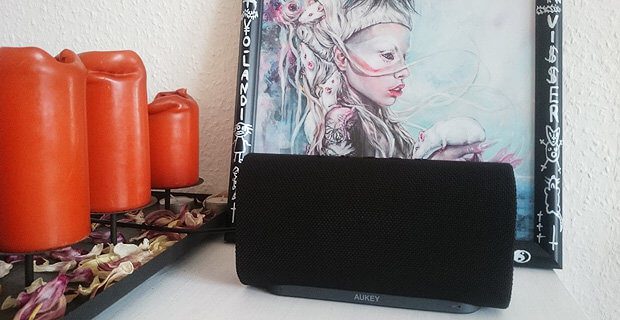 With its simple design, the big one also fits into my sparse decoration. Especially when he plays Die Antwoord ...

As you can see, I hear a lot of music and very different stuff from it. However, besides music, there are many other things that can be output with an AUKEY Bluetooth speaker. For example, I have the big Eclipse speaker on my little one Nokia MP37 H1 TV (old tube from back then) connected, which improves the sound by decades ;) I also use the large speaker for the Nintendo Switch when I use it via HDMI to the monitor (without its own audio output).

I use the small speaker for the laptop, the smartphone (via Bluetooth and AUX), as a radio and for music via MicroSD. Above all, the sound of YouTube videos, podcasts and more go out via the jack. In any case, a better sound than with the boring laptop box! And listening to the radio can also be fun with the speaker.

The different modes: choice and functionality

I tried everything for this test. First, I paired both devices (individually) with my smartphone. It's easy and automatic. As soon as you switch on one of the AUKEY Bluetooth speakers, the search starts. Activate Bluetooth on the smartphone and the speaker will ring. In addition to music, you can now also broadcast podcasts, phone calls and voice assistance. You can use Siri, Google Now and Alexa directly via both speakers. Because large and small boxes can also be coupled with the Amazon Echo and Echo Dot.

However, since Bluetooth consumes more battery and every speaker comes with a micro-USB cable, a user manual and a warranty card, a 3,5 mm jack cable is included, especially for the small AUKEY SK-M31. I can recommend the cable route especially if your smartphone, tablet or laptop has poor / no BT transmission.

More functions on the AUKEY SK-M31

Bluetooth, AUX and microphone - these are available on both models. But only the small compact one was able to bring additional functions for the test. For example an FM radio. To use this, press the mode button next to the power slider and then long press the play button. This starts the search. You can then switch between the channels found with the volume up and down buttons (press longer; press shorter for volume). 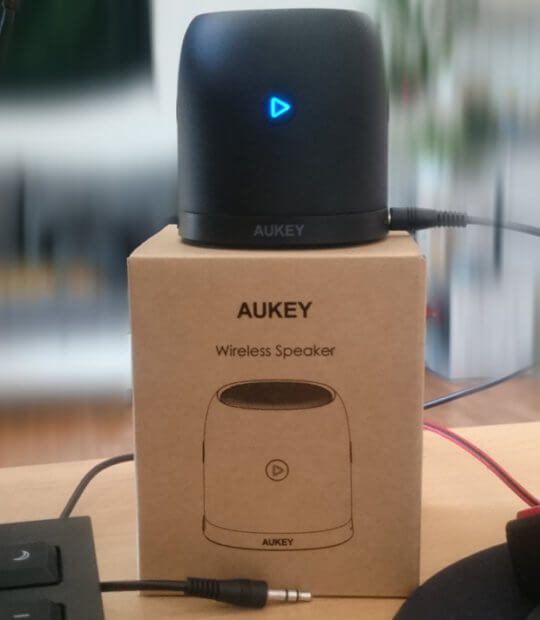 When using the little one as a radio, I recommend a jack cable (included) as a wire antenna.

And then we have the MicroSD card, which I tested last. This is where you notice when the functionality reaches its limits due to the compact size. Because the map fits in perfectly and doesn't stick out, but you can't manage its content extensively. Play and pause work, of course. The titles are played on the memory card but by alphabet and track numbers (folders for artists, albums, etc. by alphabet and individual songs by track number). However, you can toggle back and forth by holding down the volume buttons longer. If you want to skip to the next album, you have to do it several times.

Tip for playing music via MicroSD: number everything well, namely it is played according to alphabet and track number. But not bad for audio books ...

When operating and testing the AUKEY Bluetooth speakers, I was able to determine a few things that are not and cannot be noticed when simply looking at or browsing Amazon. Here are a few tips for the more optimal use of the two speakers:

When switching on, when finding an audio source (Bluetooth, AUX, FM radio, MicroSD, ...), when switching off, when pairing, when decoupling and so on, the speakers make noises. That's a good thing, because you know that they are still switched on and are working properly. But the sounds should have been a few decibels quieter.

I first had to get used to the volume of the tones. Especially when you listen to music to fall asleep, switching the large SK-M30 on and off can quickly ensure that you are brought back from the magical dreamland. Even if you have soft music playing for a romantic evening, then you should rather use the SK-M31, because it can be switched off noiselessly;)

The larger of the two AUKEY Bluetooth speakers in this test gets a bit marketed more extensively than the smaller one. That's why the manufacturer also has a short video on YouTube to introduce the device (online since May 2017):

the price is hot

I don't think there's anything to complain about about the prices. Of course, you can get individual speakers with Bluetooth, jack, radio and / or slot for the memory card cheaper - but then there are deductions for sound, functionality and general quality. Because I have to say one thing: the workmanship and feel convinced me of the one and the other box; just like their great sound. I therefore mean that the price of € 22,99 for the SK-M31 and the price of € 52,99 for the SK-M30 is not dimensioned too high. (Prices as of August 2017)

Instead of writing a long summary as a continuous text, I would like to give a summary of the individual areas of test and use. I think that does this review justice more than a few generalizing sentences. Therefore, here is not just one conclusion, but several conclusions:

Where can you find more tests?

A test is practically no test, so if you haven't had enough, you can take a look at the product pages of the two AUKEY Bluetooth speakers and study the customer reviews there. On average, the devices have good ratings, but there is also a bit tougher criticism than here. So if you need more input, here are the links to the products again: Mini speaker SK-M31 / Eclipse Speaker SK-M30

What do you think about the topic? Do you have one of the two or even all two devices in use and can you confirm or refute the statements of this test report? Or do you have a question about the products? In any case, leave a comment! ;)