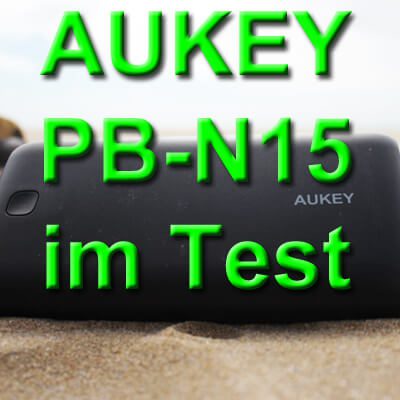 In April 2017 I put the AUKEY PB-N15 power bank with AIPower technology, 20.000 mAh capacity and low price on Amazon to a test. On a trip to, through and from New Zealand, I took the AUKEY connect test winner both through security checks at various airports (once it caused a search of my hand luggage) and, of course, used it to charge various devices. With the iPhone 5S, the Sony Xperia Z2, a Samsung cell phone, a GoPro and a Bose Mini II SoundLink loudspeaker, the AUKEY PB-N15 Powerbank with 20.000 mAh did a very good job. Here is the detailed test. 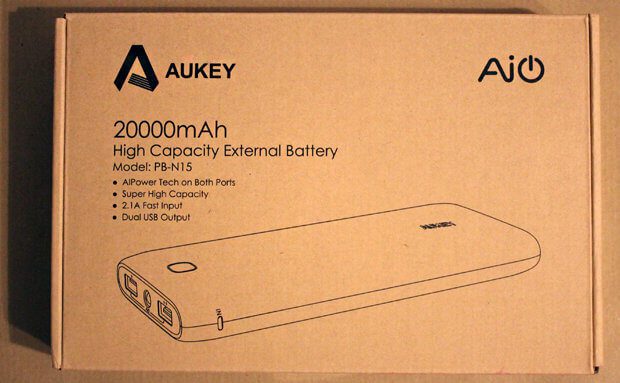 Copyright of all photos in this article: Johannes Domke / Sir-Apfelot.de

The AUKEY power bank with the designation PB-N15 has a comparison of 14 external batteries, which from the specialist magazine connect was carried out, took first place with 272 out of 300 points. Impressive, but not meaningful enough for me - that's why I took the power bank with me on vacation for a month; When traveling through New Zealand in a campervan as well as on arrival and departure, the external battery did not disappoint. Even in the event of an unplanned power failure in an Airbnb accommodation booked in between, the power bank with its 20.000 mAh capacity was able to help. Since a few devices come together with three travelers, the high capacity was also necessary in the end. It also offers a flashlight function;) 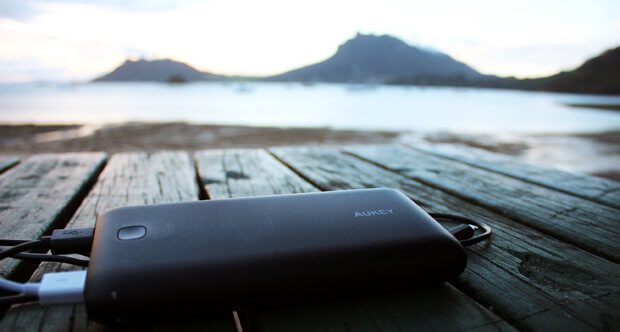 The AUKEY PB-N15 power bank in action: on a picnic table in New Zealand.

The external, rechargeable battery for mobile devices has two USB ports. Each USB connection has AIPower technology, which means that it automatically detects the connected devices and charges in accordance with them. With a maximum of 3,1A, iPhone, iPad and iPod as well as Android devices and cameras can be charged quickly. 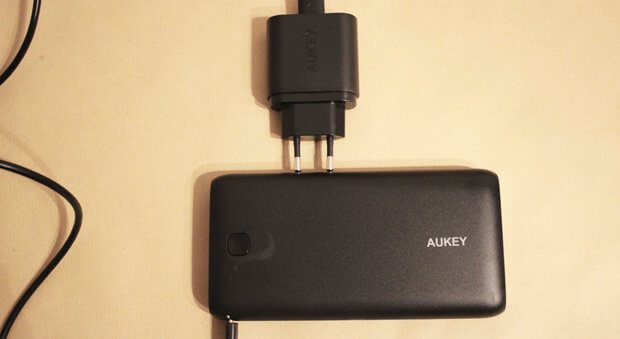 The scope of delivery of the AUKEY Powerbank is clear, but sufficient. In the packaging you will find the power bank, a short, white cable with USB-A and micro-USB as well as an instruction manual. Among other things, this shows the charge the external battery has when one to four of the indicator LEDs light up (when the power button is briefly pressed). If one LED lights up, the battery is charged up to 25%, with two LEDs it is up to 50%, with three LEDs up to 75% and with all four lights between 75 and 100%. By the way: If you press the power button a little longer, the fifth built-in LED lights up, which is located between the USB ports and serves as a flashlight;) 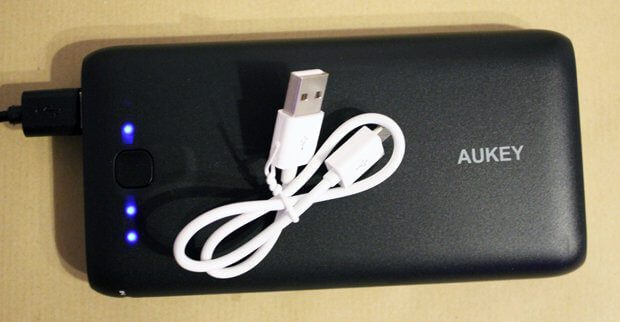 Incidentally, the power bank is charged via micro USB with a maximum of 2,1A. With a capacity of 20.000 mAh and a maximum output voltage of 5V, the AUKEY device has 100 Wh (watt hours). This means that it can be carried in hand luggage for the plane. In the AUKEY power bank PB-T11-TYUK this is not possible because it has a value of 30.000 Wh with its 150 mAh. In the linked article there are details on the subject of power banks in aircraft hand luggage.

My experience with the external battery

Many airlines already offer USB connections in their aircraft for charging smartphones, tablets, etc., and some airports (such as the one in Bangkok) also offer charging stations for mobile devices - but a power bank is even more flexible when traveling. This means that you can still charge the smartphone's battery when boarding or at the baggage check-in. But also when you are on the move, for example in the van, on a hike, in an accommodation in the event of a power failure (happened to us on April 13, 2017 in Hastings) or when you have to quickly charge the GoPro on the beach, then the power bank is for one there. I can guarantee you that! 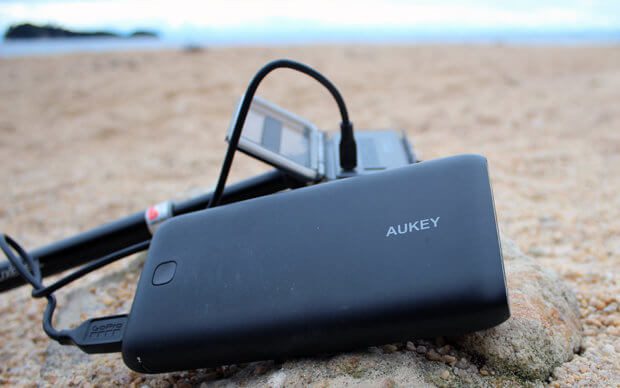 On a hike, quickly charge the GoPro with the AUKEY power bank. Thanks to 20.000 mAh, this is often possible.

In addition to the PB-N15 Powerbank from AUKEY with 20.000 mAh, I also use other AUKEY products. Namely the cable CB-D11 with USB 2.0 Type A and USB Micro (3,2 meters cable length!) As well as the USB Turbo Charger PA-U28 with Qualcomm Quick Charge 2.0 technology. I also took both articles with me on my travels; they are wonderfully suitable for charging the power bank or the smartphone, tablet and other devices directly. Only one thing didn't come from AUKEY for me: the Socket adapter for use of the set in New Zealand.

AUKEY Powerbank test: My conclusion on the external battery

The AUKEY PB-N15 power bank with 20.000 mAh is an inexpensive and very useful additional battery. It's relatively robust and delivers a lot of energy. A little tip: since you are on vacation and want to have some peace and quiet, switch your smartphone to flight mode, then the power bank does not have to be used that often and is also sufficient for the iPhones of your travel partners as well as for GoPro and Co. Another tip: put the external battery on a mat on the beach - you won't believe how quickly sand hides in the USB sockets;)