Today's test is about the True Wireless headphones BW-FYE8 from BlitzWolf. A brand that was previously unknown to me. The manufacturer recently wrote to me and asked if I would like to test their in-ear headphones. Of course, I don't fight back for long and have had a few sent to me.

Processing and optics of the BlitzWolf BW-FYE8

The in-ear earplugs come in a small, oval case, with which they can be stored and charged at the same time. In contrast to all the AirPods replicas that you would otherwise find, the earphones themselves have a unique design with a piano lacquer look in black. At the base of the ear studs, through the transparent plastic part, you can also see the two drivers made of graphene, which provide the sound. This is also well solved in terms of design. 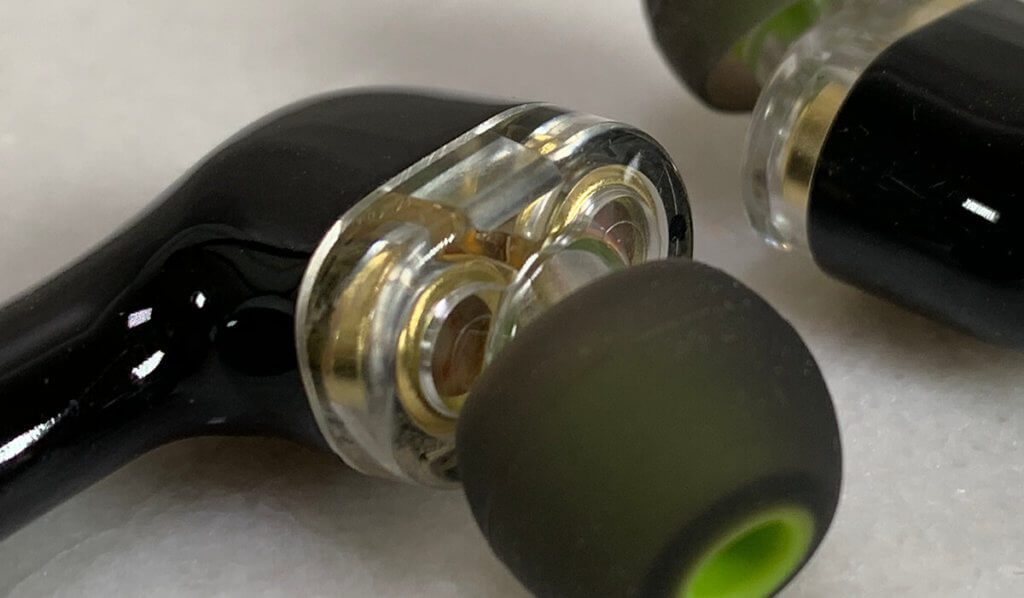 The two graphical drivers can be seen through the transparent part of the housing (Photos: Sir Apfelot).

The storage box is not quite as pocket-friendly as the AirPods box, which you can barely feel. But the oval shape also makes it easy to carry the headphones around in your pocket.

The earbuds themselves are also significantly longer than the AirPods Pro, but that's not a big problem when wearing them. This only makes them a little more noticeable than the Apple in-ear headphones. 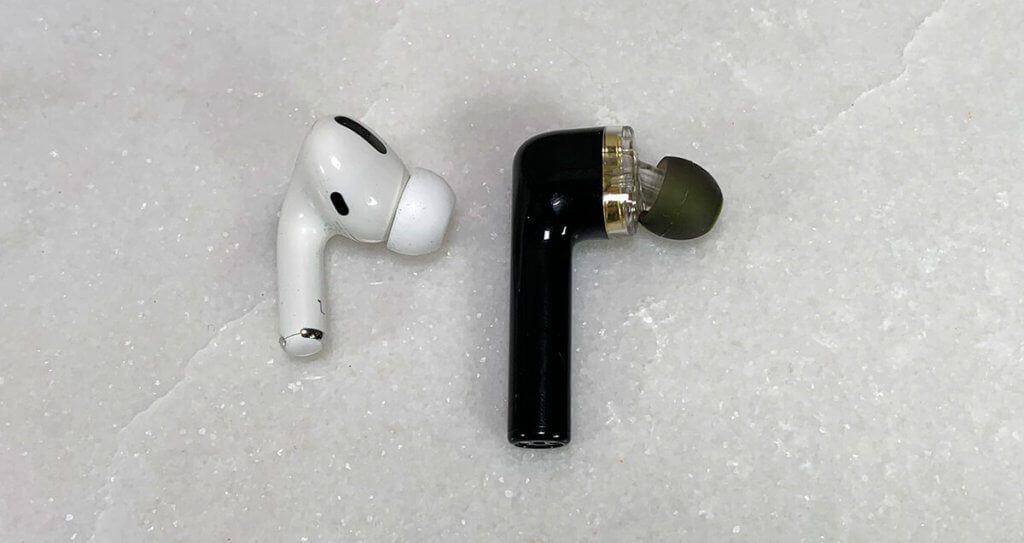 The BlitzWolf BW-FYE8 are significantly larger than the AirPods Pro, but they sit securely - even during sports (Photos: Sir Apfelot).

As always, first of all the technical specifications of the Blitzwolf headphones:

What is the protection class IPX5?

IPX5 lies between IPX4 and IPX6 and means "protection against water jets". The IPX5 protection class does NOT mean that these headphones are waterproof. Then they would have to meet at least IPX7 or IPX8. Nevertheless, the manufacturer advertises with the term "waterproof". I wanted to test that ... 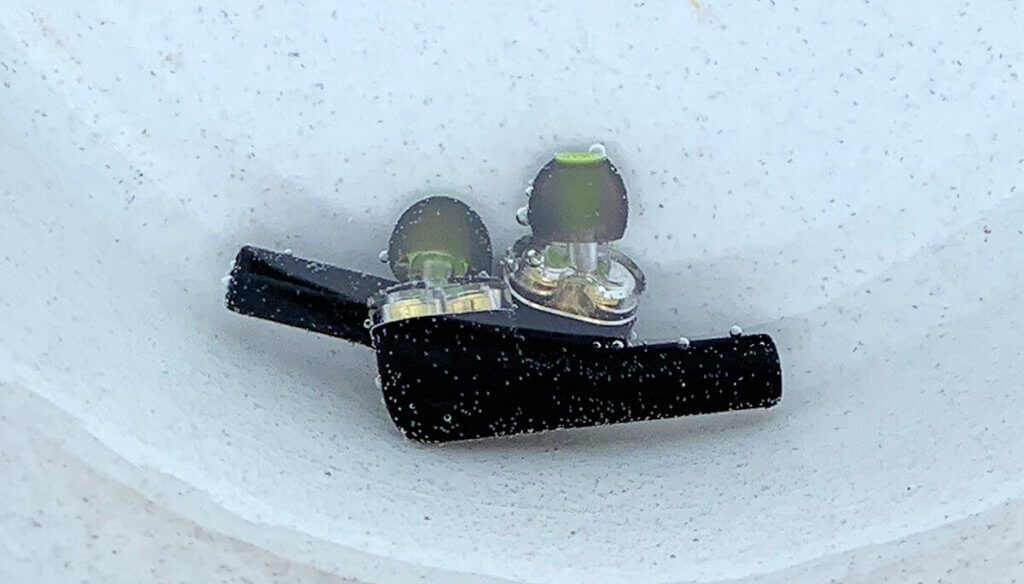 An hour in the bucket of water - and these things still work. This is how it should be when a manufacturer promises that a product is "waterproof".

An hour in the water bucket ...

If it says "waterproof" somewhere, it should be. So I threw the two earphones into a bucket of water for an hour and then saved them again. You will certainly not get more water when showering, through rain or sweating.

The result: they still work. I think the multi-function button is somewhat influenced by the water, because after immersing it, they went back into pairing mode and flashed red-blue. Operation with wet fingers is almost impossible, but at least: When the fingers are dry, they can be paired and used again. It's great that the word "waterproof" is used here. 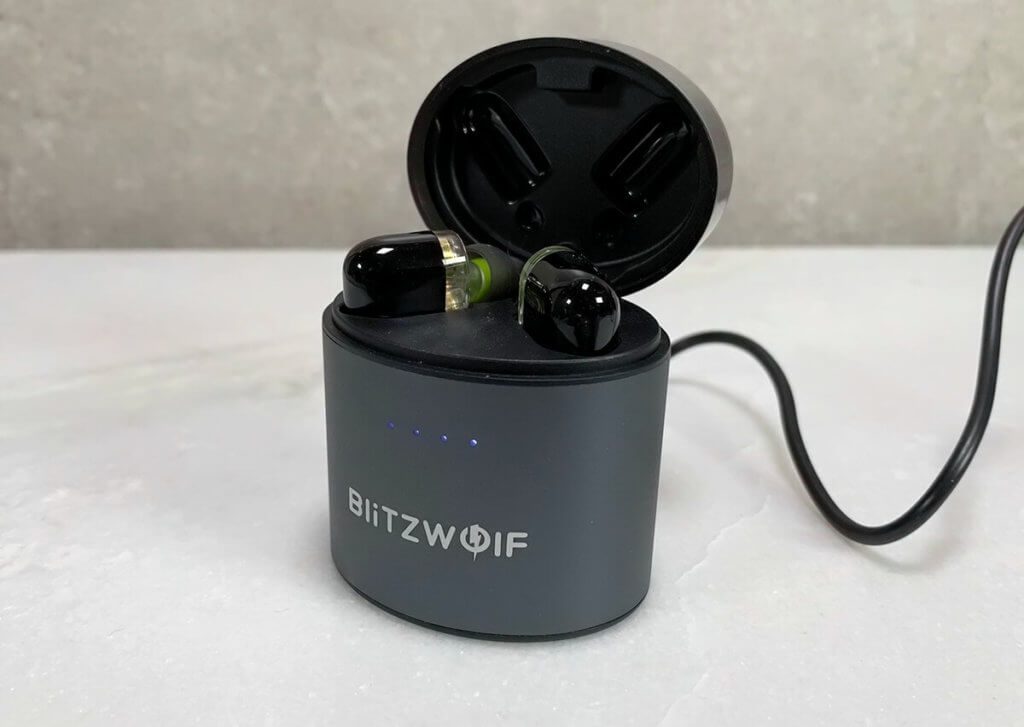 The storage box doubles as a battery case and fully charges the BlitzWolf headphones up to 4 times.

Latency not noticeable in videos and games

In the Reviews from Amazon you can find some comments that indicate a latency of up to 500 milliseconds that you have when playing games or watching videos. That seems to have a lot to do with the device you are using. I tried the headphones on both the iPhone and iPad with games, YouTube, and Netflix and couldn't find any noticeable latency.

You can also pair the BlitzWolf Earbuds individually via Bluetooth - even with different devices. For this reason, it appears here twice in the Bluetooth menu.

Operation via multifunction button - takes getting used to

I have to admit, I couldn't find the multifunction button at first - no wonder, because it's a touch field that looks like the rest of the surface of the earphones.

This is perfect for the design, as no button disturbs the look, but here I am more of a fan of the motto "form follows function". Operation would be much easier and more practical if you received feedback from the control panel or if the button were a "real" button that clicks when you press it.

Personally, I had serious problems using it. To switch off, for example, you have to press the touch field for 10 seconds. Since you don't know how hard to push, you push really hard. Holding the pressure for 10 seconds is exhausting and not exactly pleasant.

Overall, I would have liked the operation of the BlitzWolf headphones to be more intuitive and easier. 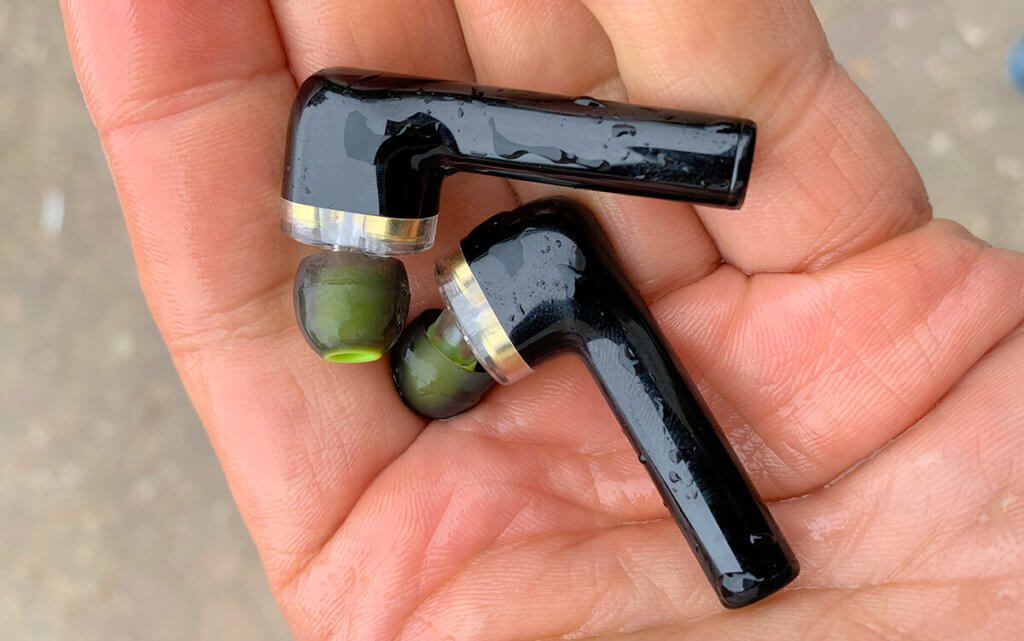 Using the BlitzWolf in-ear headphones with wet hands is almost impossible - but at least they are protected against rain and sweat.

Use as sports headphones

Since the BlitzWolf BW-FYE8 are designated as sports headphones by the manufacturer, I would also like to briefly discuss them. The fit of the ear studs is very good - once you have them in there. I had a hard time with it because my ears seem to be built differently than the headphone developers had imagined.

Instead of looking down, the rods of the earphones look almost horizontally forwards when I want them to sit properly. The adjustment in the ear is much more difficult for me than with the AirPods Pro - but I have a few problems putting them on with most in-ear headphones.

But once the earbuds are in place, they won't fall out during exercise. Operation in sports is not easy, however, because the touch fields react unpredictably if you tap on them with wet fingers.

Here, too, a "real" button would have been much more reliable to operate. Touch operation is really only a good thing if the technology is mature and works reliably.

In addition to the headphones themselves, the scope of delivery also includes a charging box, silicone earplugs for adjustment and a micro-USB charging cable.

The sound of the BlitzWolf BW-FYE8

The sound of the BlitzWolf EarBuds is rather neutral for me. If you find the AirPods Pro too bass-heavy, you should be happy with the BW-FYE8. For my taste, the bass is a little missing.

Otherwise the sound is fine from my point of view. I think, especially for classical music, the "neutral" alignment of the frequency response should be a positive thing. I'm sorry if I'm not presenting a large collection of adjectives like the ones you often find in audio magazines - I'm just not creative enough. ;-)

There are a total of three different sizes of silicone earbuds that can be attached to the BlitzWolf True Wireless headphones in order to adapt them to your own ear canal.

Conclusion on the BlitzWolf BW-FYE8

The bottom line is that I neither recommend nor advise against the BlitzWolf BW-FYE8. Coupling the EarBuds is easy and operation can be easily controlled via the iPhone. Seen in this way, operation is not necessarily an exclusion criterion - even if it could be better solved.

Personally, I miss the bass a bit in the sound, but that's more of a subjective feeling. Lovers of classical music are often less friends of bass-heavy headphones such as Beats, Bose and Co. Apart from that, the BlitzWolf true wireless headphones sound quite balanced.

Due to the moisture-sensitive operation, I would not recommend it for sports use. With sweaty fingers, pausing and resuming the music will be rather difficult.

I will be giving away my test copy of the BlitzWolf True Wireless headphones to my newsletter readers in the coming weeks. Whoever likes to participate can simply join subscribe to my weekly newsletter and pay attention to the competition question in one of the next issues. The headphones are then used, but of course grown and disinfected. When the competition is over, I'll take this paragraph out. So if you can still read this, the copy has not yet been raffled.

Here I have photographed the instructions (the German part), in which you can see how the pairing and the rest of the operation of the BlitzWolf headphones work. Since the headphones can also be used as a headset when making calls, it is helpful to know how to answer and reject calls with the multifunction button:

BlitzWolf BW-FYE8 True Wireless Headphones: Operating instructions in German for pairing, key assignment and the like.