In the test: Google PhotoScan for scanning photos on paper

Today I was briefly forced to do a little test of the iPhone app Google PhotoScan. A friend here in town suddenly wanted old photos (on paper) on his PC. Because he doesn't have a scanner, he asked me to take a photo of the photos and then email them to him so that he can have them on his computer.

"There was something with Google and Photos ...", I thought to myself and then realized that I had already installed the app "Google PhotoScan" or in German "Photo scanner" on my iPhone XS. However, I had never used it before. Now the time had come to check out the app. For my test, I gradually placed the photos on a white shelf on the balcony - without any extra lighting. Only the cloudy sky provided the light. So much for the test conditions.

First of all: I had concerns at first that I would have to have all of the photos uploaded to Google. But this is not the case. The photos that are digitized with the "photo scanner" end up locally in the iPhone's photo library and can be further edited or shared from there. 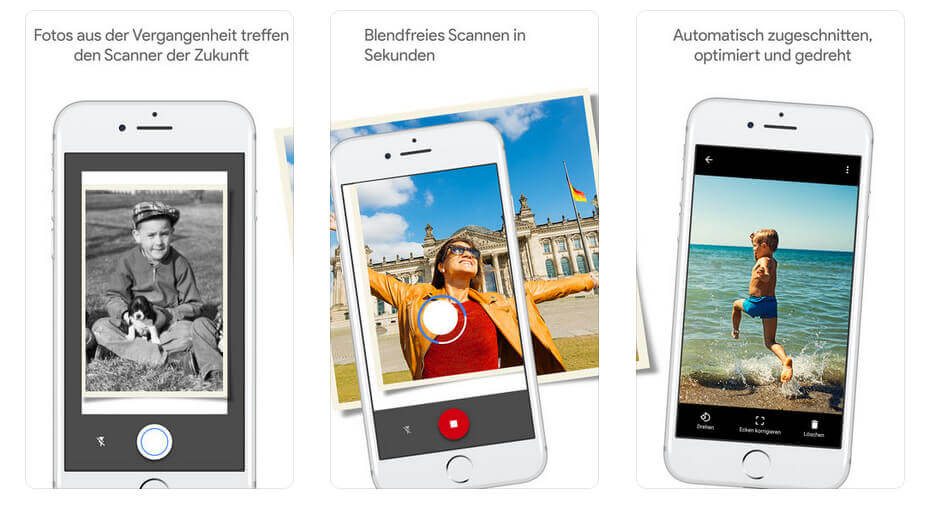 In a few simple steps you can digitize your paper prints with Google PhotoScan. The app is even available for free.

Turn 5 into 1: This is how the scan works

Basically, you could take photos of the photos with the iPhone's camera app, but this has several disadvantages:

The Google app has a little trick against these reflections in store, because it asks you to take exactly five different photos of the paper print. She adds up these recordings and can thus remove reflections - even from glass frames - from the photo. The result is pretty impressive.

With the PhotoScan app from Google, photos can be digitized very quickly - without any reflections in the image.

The removal of the unwanted background is also built into the automatic processing process of the Google PhotoScan app. The actual photo is rotated, rectified and cropped "on the fly". At the end it is automatically saved in the photo library of the iPhone - provided that the app has been given permission to do so.

If you look at the following video from Google (it gets exciting from minutes 1:02!), You can see straight away how easy the scanning process is with the app:

Fast processing of many photos possible

Anyone who has a large box with lots of old photos will be happy about the app's practical user interface. It gives precise instructions (via AR overlays in the camera image) from where to take the different photos. The aggregation and cutting is done in seconds and the finished image is automatically added to the photo collection. So you can take a large number of photos in a relatively short time and work your way through old photo albums or boxes.

My conclusion: there is probably nothing better!

I haven't really had any experience with other photo scanning apps, but I find it difficult to imagine that anything can be improved in terms of the results and the user interface. What ends up in the camera roll when digitizing photos on paper are good photos of the scanned images, with only marginal post-processing of colors, sharpness, exposure or tonal value correction. I also think that's very good, because the automatic image enhancers always have problems with one or the other photo. Before the good old recordings are "damaged" by this, I prefer to have a neutral print without any major changes.

So if you ever plan to digitize a large number of photos or simply have to "scan" four photos of your friends, then the free app "Google PhotoScan" is your friend.