In the test: InLine 4in1 Bluetooth keyboard for Mac, iPhone and iPad

The manufacturer InLine kindly gave me its new one 4-in-1 Bluetooth keyboard sent so that I can write a short review about it. Somehow the "short" didn't work out, but I hope you won't be bored with my experience report.

The special thing about this Bluetooth keyboard from InLine is that it can be paired with up to 4 Bluetooth devices - including not only Macs, but also iPhone, iPad, Windows computers or other tablets and smartphones.

I have tried the keyboard with my iPad, iPhone and MacBook Pro and would like to briefly describe my experiences with the device here. In fact, I am typing these lines on this keyboard right now. 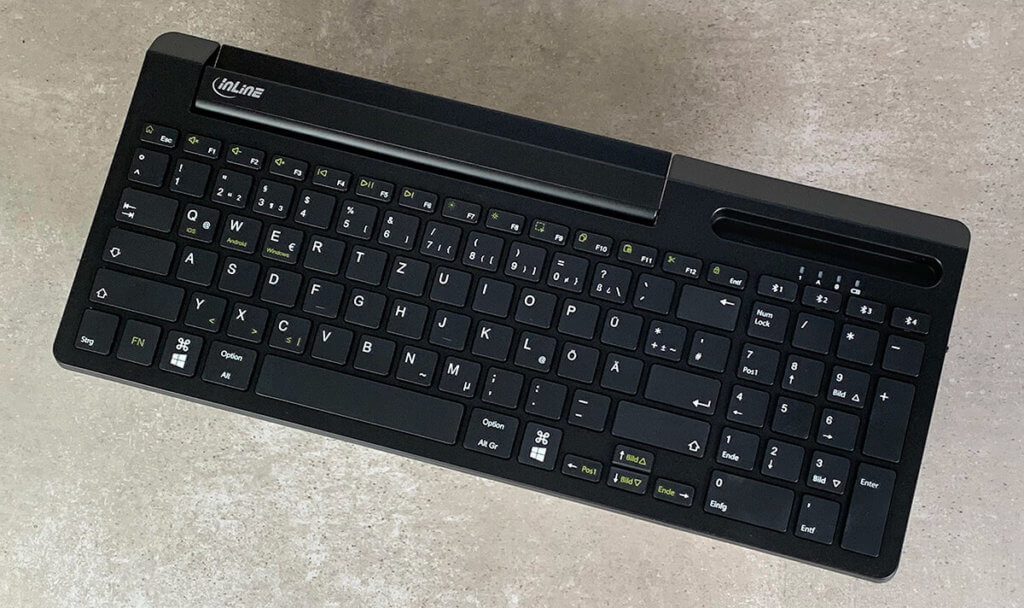 Looks simple and elegant: The 4-in-1 Bluetooth keyboard from InLine (Photo: Sir Apfelot).

Before we get to the design, key travel and typing feel, I would first like to say a word about the technical data of the keyboard. As always in the form of bullet points: 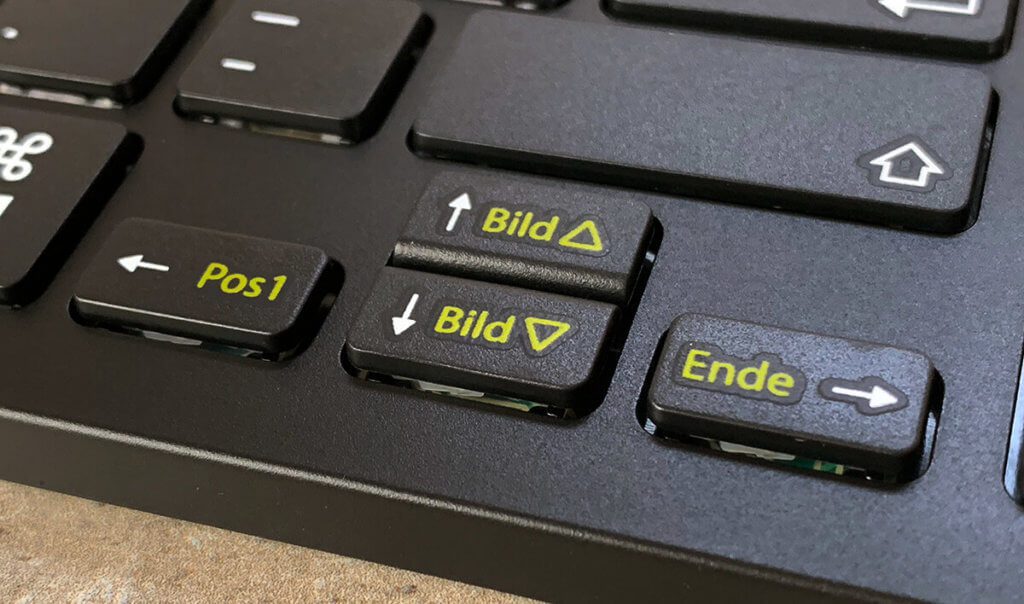 Here you can see that the lettering is glued to the keys and not lasered. Still, it withstood my attempts to scrape it off or loosen it with my fingernail. The bonding is right here.

The matte black look of the keyboards is elegant and it also feels very valuable. The weight of more than 800 grams alone gives a confidence-inspiring impression. The addition "aluminum" in the product name is also no coincidence and explains the material the body is made of.

The key travel is comparable to the old Magic Keyboard. I think it's about a 2mm stretch that you can push here. The keys only make light tones - similar to the old Apple keyboard (see photos below) - and for luck prevent a loud clatter, which has already driven me crazy with some keyboards. I think it's okay when you hear that you are typing, but the neighbors don't necessarily have to notice. ;-) 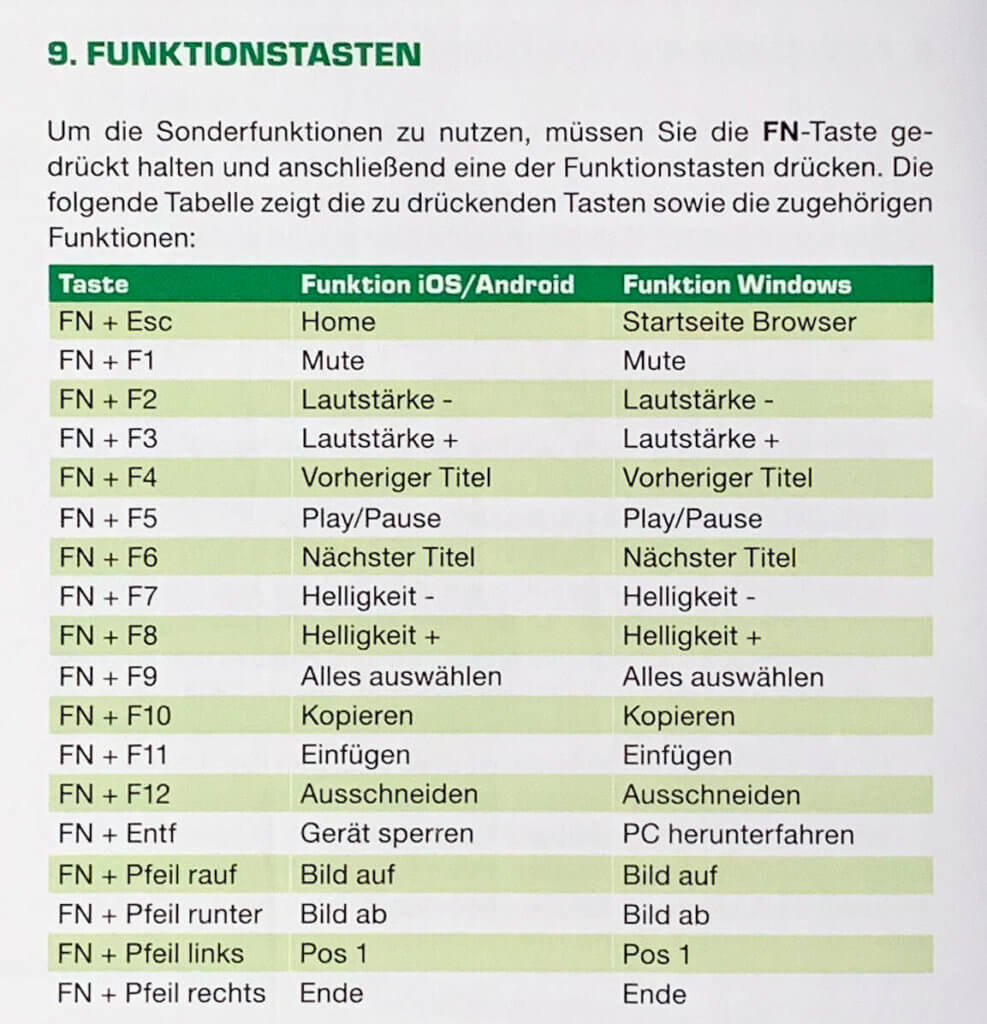 In the printed manual (in German!) You will find an explanation of all F-keys.

There are numerous symbols on the keys that represent either functions or special characters. In the row of function keys there is a separate assignment for the multimedia control as well as for brightness, volume, copy & paste actions and more.

What has really been made mandatory with the inline keyboard is the operating manual and the quick start guide printed in the package, which explains all the special keys. So even as a technology dummy, you can quickly find your way around the keyboard.

The various LEDs not only show the paring mode of the individual channels, but also indicate the charge status of the battery.

What the individual function keys do on the 10-series and what the LEDs indicate is easy to understand.

I think it's a pity that the keyboard is still on a Micro-USBcharging socket and is not already aligned with USB-C. Currently, however, this is a point of criticism that probably only affects people who travel a lot with new Macs and iPads. Everyone else will still need a Lightning connector anyway, so it doesn't matter if there's a micro-USB cable plugged into the charger. 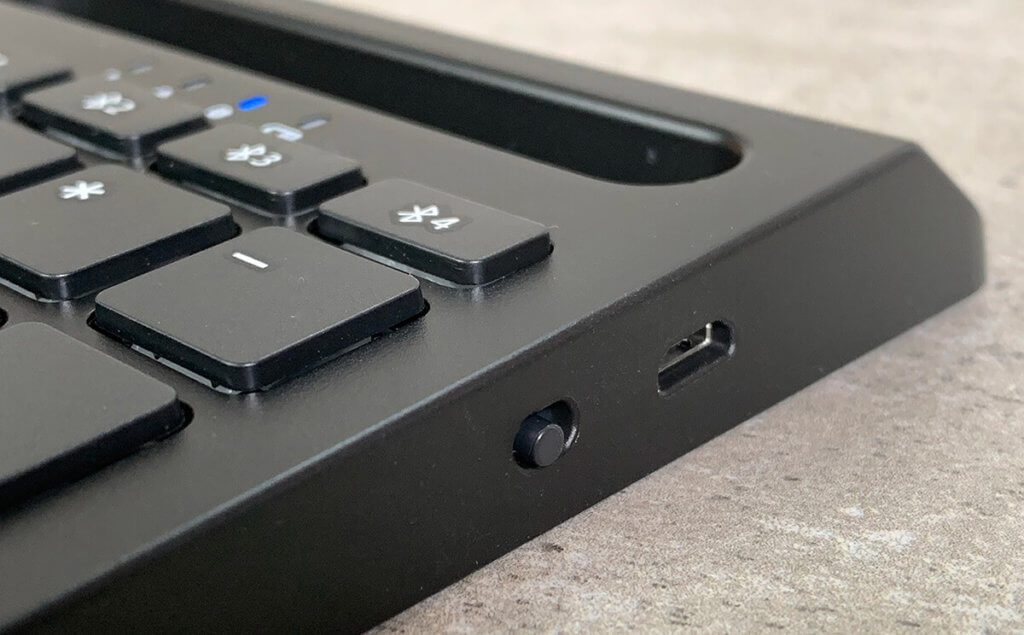 A "real" switch saves the energy of the battery and helps to keep the keyboard ready for use when it is not used for a long time.

I immediately noticed the mechanical slide switch, with which you can turn the keyboard on and off, positively. I find this type of switch very important, because it means I know that the keyboard can be switched off during a long break without using up any more battery life in standby mode.

If you leave the keyboard activated anyway, this is no break in the end, because after 10 minutes it goes "to sleep" and then hardly needs any electricity. The wake-up works by pressing any button. In my test, it recorded the next input after about 2 to 3 seconds.

If you want to pair your Mac, iPad or iPhone with the InLine Keyboard, the pairing mode is active as soon as the keyboard is switched on for the first time. Now you just have to go to the Bluetooth settings of the other device and select the InLine keyboard. When pairing for the first time, a four- or six-digit number is required.

Once a device is connected to the keyboard, you can jump back and forth between the individual devices using the 1-4 keys located above the number pad. Connecting to a new device takes less than two seconds for me and is very reliable.

If you want to decouple a device, you hold down the Bluetooth button with the corresponding number for three seconds and there is free space for another Mac - or whatever you want to connect.

When the keyboard is ready to pair, it will be indicated with a blinking blue LED. 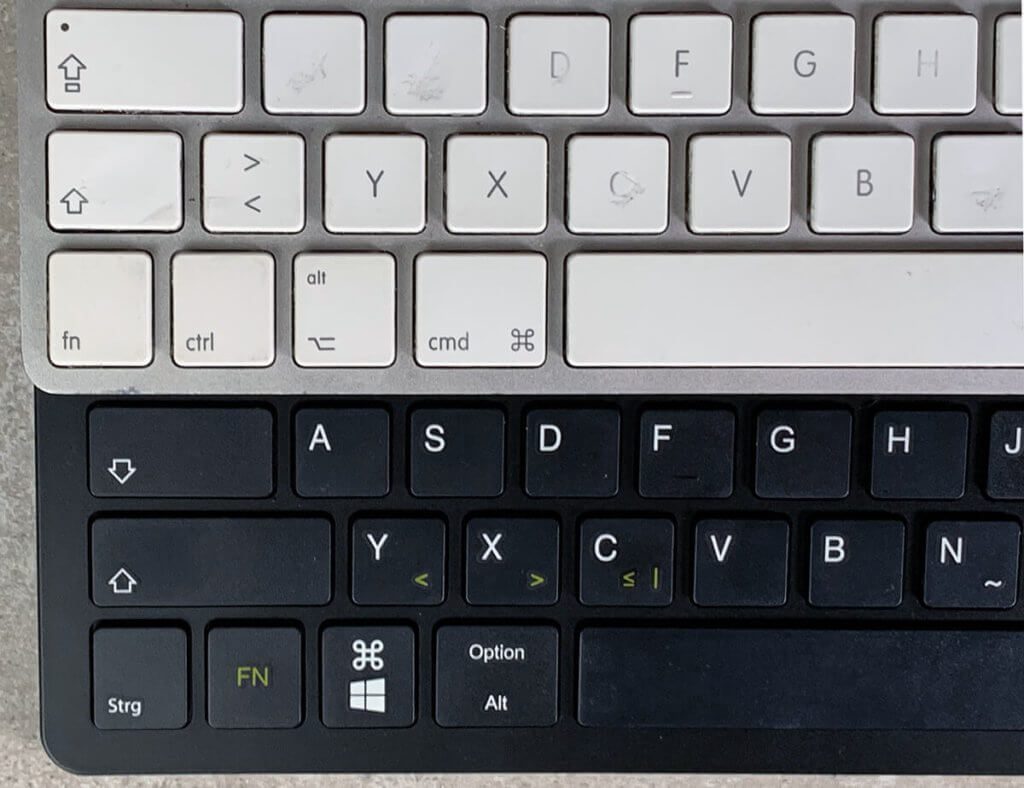 Above is my Magic Keyboard and below is the InLine Keyboard. You can see that the key assignment in the corner is completely different, but this applies to all keyboards I know that are not from Apple.

How does it type on the InLine keyboard?

I have to say that I like the keystroke and I have very few typing mistakes, which are based on my typing and the unfamiliar keyboard and are not due to the technology ... On the contrary: I haven't had a single dropout or double letters so far. This has already happened to me with some cheap keyboards: You blindly write a sentence and then notice that some letters are missing. Of course, that shouldn't be the case, and it didn't happen with the InLine keyboard either.

Switching from the Apple Magic Keyboard is always not easy for me, but that is caused by the different assignment of the SHIFT, CMD and ALT keys, which can be found in the lower left area. For example, I prefer copy and paste (CMD + C and CMD + V) or the long hyphen (Em dash) more often wrong.

In my opinion, the inclination of the two keyboards is identical, so that you feel at home in that regard.

The CTRL key is still a mystery to me because it doesn't seem to have any function on the Mac. I suppose this is the one for Windows users.

The keyboard should be helpful for beginners, as there are many special characters in the row of numbers on the keys that cannot be found on the Magic Keyboard. There you just have to know them by heart.

Installation of the keyboard on macOS and iOS

On iOS, the keyboard works immediately after pairing. When setting up under macOS (for me macOS Catalina) a message is displayed that he cannot identify the keyboard. I ended up with a selection dialog where I should choose the keyboard type. I selected ISO (European) and was able to type all special characters and umlauts, which speaks for a good choice on my part. 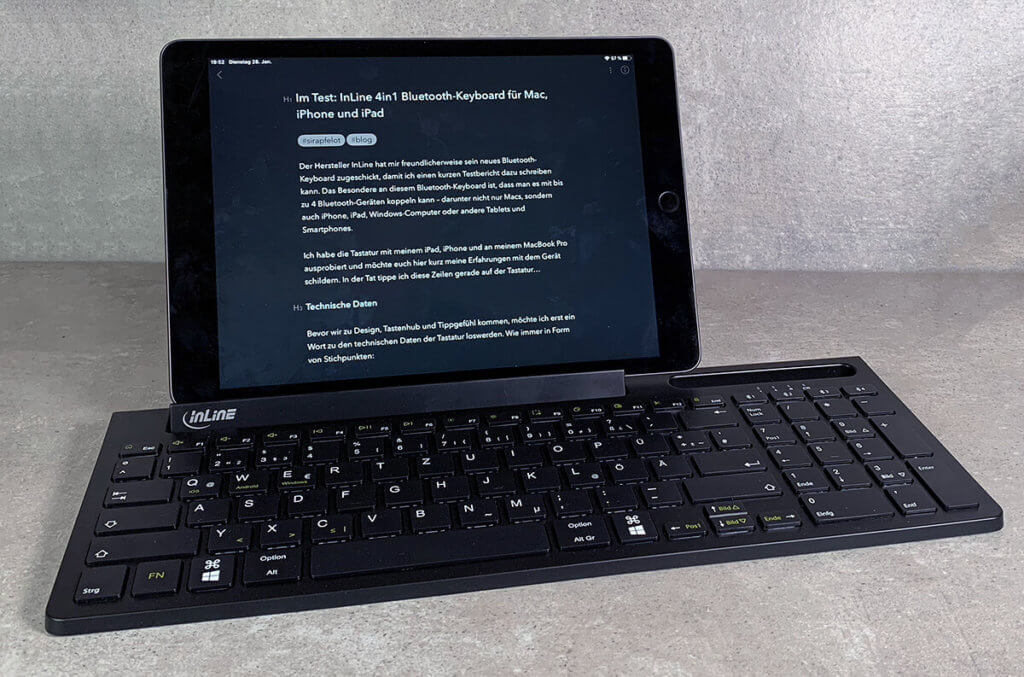 The iPad can be conveniently inserted into the foldable holder and the angle of inclination can be easily adjusted.

Use with iOS on the iPad or iPhone

If you use the InLine keyboard with an iOS device, you can insert it into the holders provided in the keyboard. The slot for the iPad can also be tilted so that it does not stick out when you are not using it.

What I find remarkable about using it on iOS is that you can even unlock the iPad using the keyboard without operating it. You press FN and Del. (There is a lock symbol) and the iPad wakes up. The pin can then also be entered via the keyboard and you are on the home screen. 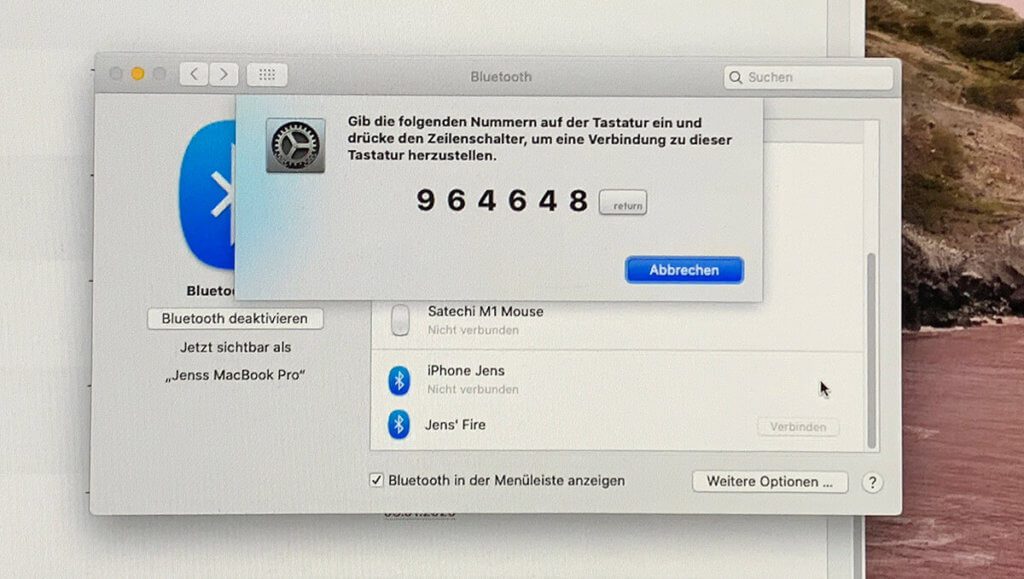 Under macOS, when you pair the keyboard for the first time, you enter a 6-digit code provided by the Mac.

Not all function keys are assigned under macOS. The special keys for cut, copy and paste, for example, do not work. However, the multimedia buttons and the volume control work without restrictions.

Important: With FN + Q, W or E you can set the operating system under which the keyboard is currently being used. This is important for the function of the special keys.

You can see: macOS is missing from the selection here, but if you set the keyboard to Windows, the special keys (play / pause, brightness, volume, etc.) work. 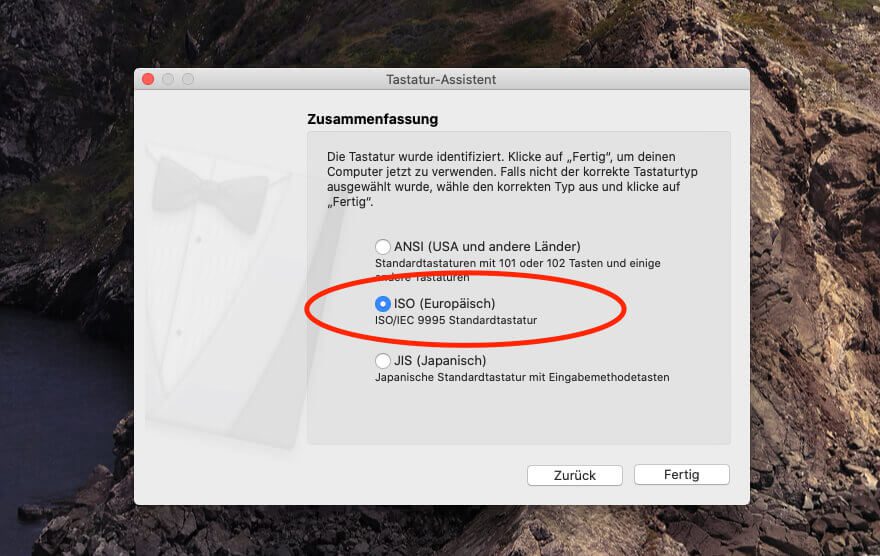 If you connect the InLine keyboard to the Mac, the Mac is a little puzzled as to which keyboard type it is facing. For this reason, the manual selection should be set to "European".

Audience: People who want to use multiple devices with one keyboard

There is nothing wrong with the keyboard itself. Thanks to the pleasant typing experience and the good workmanship, it can of course also be used as a standard keyboard on the Mac, but it only really makes sense if you couple several devices with it.

I think it's especially interesting if you have a PC, another Mac or an iPad at work in addition to the Mac, and you want to switch between them quickly. Then the InLine keyboard definitely shows its strengths. This is likely to be the case, for example, with developers who work on Mac and Windows PC as well as on different tablets.

If you want to buy the keyboard, you will find it here at Amazon or via this product box: