After doing a Test of the Hunda A1903 multiport USB-C charger with 150 watts published, I got the tip from a reader to get the LinkOn Genius Ganius 166 watt power supply to subject it to a test.

No sooner said than done: I rang LinkOn and asked for the 166 watt power supply. A few days later a LinkOn Ganius arrived, but “only” the 136 watt model. That struck me as a little strange so I read through the product text again and found the following:

This charger got certification for 136W but its maximum output when using all ports is 166W.

In other words, the power supply can handle 166 watts, but it is only certified for 136 watts. So there is no model that is explicitly designed for 166 watts, but only the 136 watt power supply, which is sometimes advertised in stores with 166 watts of output power.

The various output voltages and outputs of the ports are also printed on the power supply unit. However, it does not show how the performance behaves when several ports are used (photos: Sir Apfelot).

With few devices, the technical data are as important as with a power supply unit. For this reason, we start directly with these: 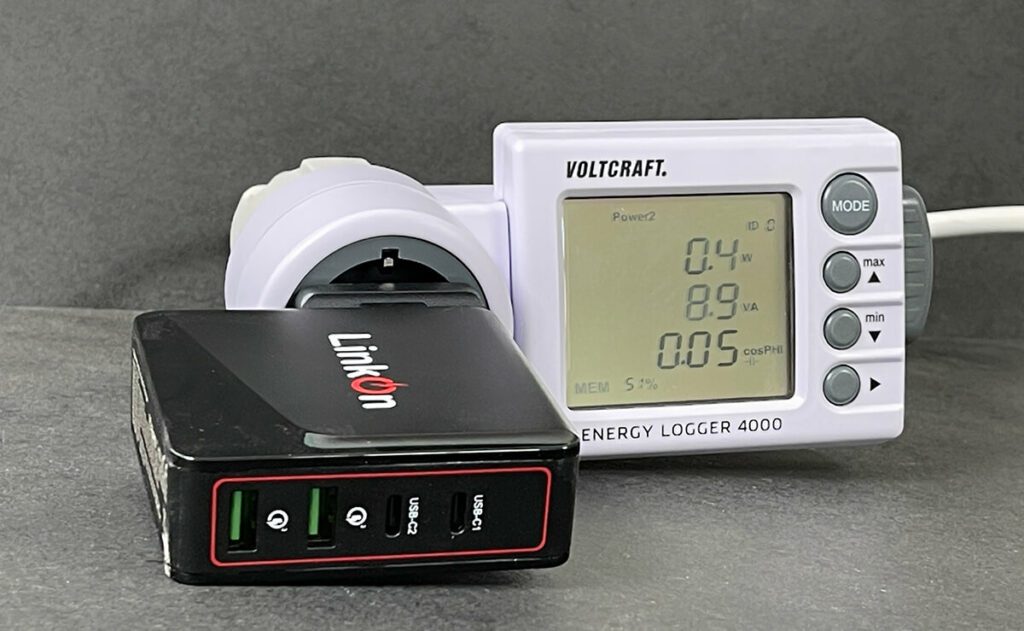 The measured standby consumption of the LinkOn Ganius is below half a watt and therefore very low (Photos: Sir Apfelot).

The design of the LinkOn Ganius is simple and absolutely ok for a charger. I find the idea that a wall charger protrudes so far from the wall a bit inconvenient, but this is also the case with other chargers and is not a special feature of the LinkOn Ganius.

It sticks out far from the wall and runs the risk of prying out the socket or breaking the plug if you walk past and get your foot caught. I would recommend adding a small extension here to circumvent this problem.

The practical thing is that you get an interchangeable plug for sockets in Great Britain and the EU with the charger. However, the look of the USB-C power supply is not exactly upgraded. With a power supply unit you can certainly get over that.

The LinkOn Ganius comes with exchangeable power plugs, which is practical on the one hand, but does not necessarily benefit the design of the power supply on the other.

Otherwise, the workmanship looks quite solid. The USB-A and USB-C plugs are firmly in place and without wobbling and the charge is also reliable.

Since the LinkOn Ganius is a gallium-nitrite power supply unit, it offers a very decent output power for its size of up to 136 watts or 166 watts, if you believe the product text rather than the certification.

The GaN power supplies have been on the rise for a few months and have one big advantage: They can be built smaller than the usual silicon power supplies and they also generate less waste heat, which also allows a smaller size.

As big as the Apple 96 watt power supply, but significantly more power

One of the main reasons you get such a powerful power adapter is for sure because you want to charge your MacBook Pro, along with a few other devices. The large 16 inch MacBook Pro with Intel chip actually needs up to 96 watts, so the LinkOn Genius with 100 watts of power on a USB-C port is certainly a good choice.

In terms of size, it is comparable to the Apple power supply for the MacBook Pro, but it also offers an additional USB-C port and two USB-A ports with which you can charge the iPad, iPhone, headphones or power banks. 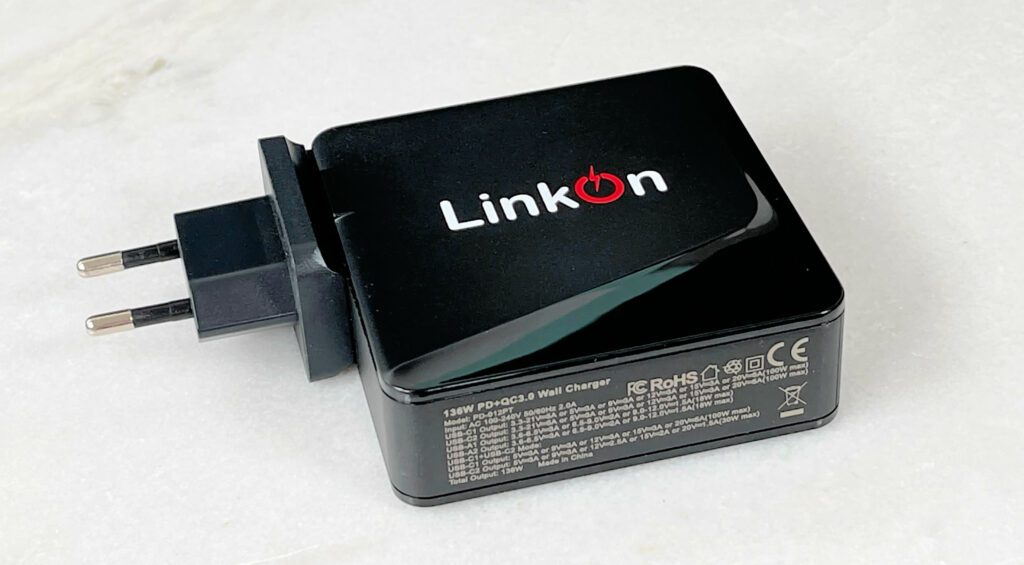 The LinkOn 136 watt power supply can easily be used as an alternative to the original MacBook Pro power supply - and it can also charge even more devices.

I've gotten into the habit of testing power supplies not only USB load resistors to simulate consumers, but always to use the Apple devices and to charge them at the same time. Some chargers tend to stop and restart the charging process when several ports are occupied. The acoustic signals from the devices make for a very annoying background noise when charging begins.

Fortunately, this is not the case with the LinkOn Ganius 136 watt charger. All connected devices only make a single tone when charging starts and then remain quiet while they are charging.

My first test candidate was my MacBook Pro 15 inch (Intel). I discharged this to about 35 percent battery level and then plugged it into the LinkOn Ganius power supply without any additional loads.

After 10 minutes of charging (during operation) I was able to make up around 16,5 Wh and 12% battery level. The charging power was around 80 watts - more is needed, the MacBook Pro doesn't, which is why I couldn't reach 100 watts. 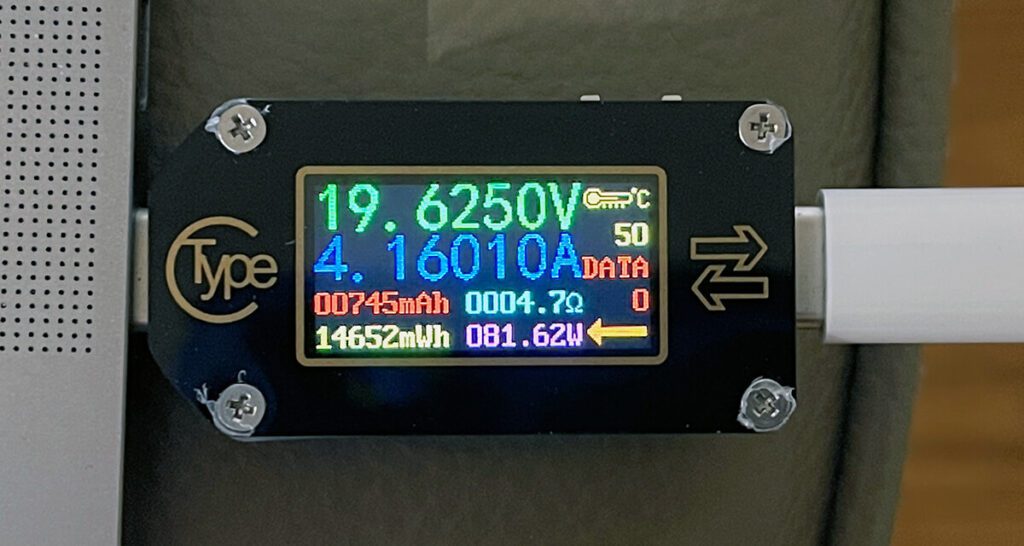 At port 1, the LinkOn USB power supply delivers over 80 watts for my MacBook Pro. Only via port 2 would it receive only 30 watts of power - with multiple occupancy.

The difference in watt hours (Wh) is not huge and you probably won't even notice it in everyday life, but it is measurable. However, the difference may disappear over a longer period of time. The charging current changes again and again during charging because the charging electronics in the MacBook Pro control the process in such a way that the battery is charged as gently as possible. 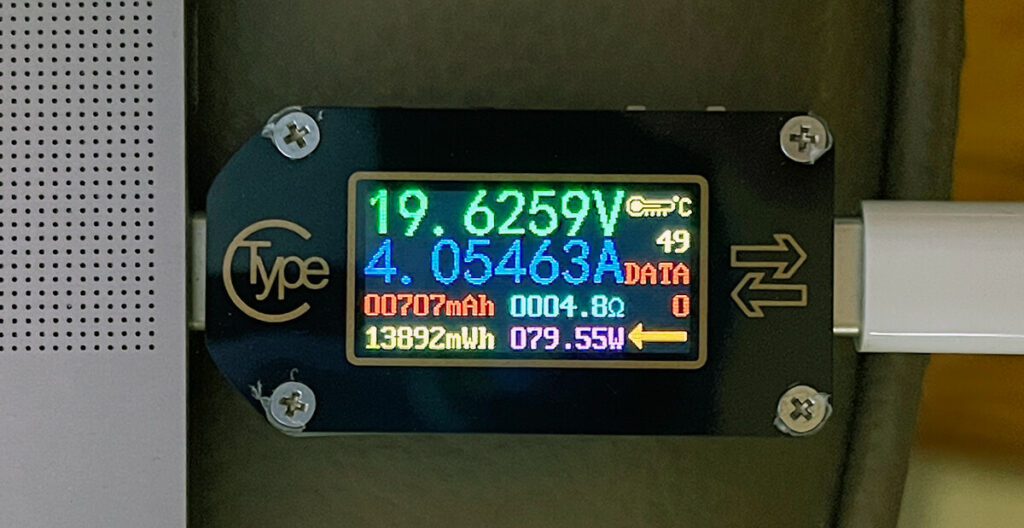 When charging with the Hunda A1903, a little less watt hours flowed into the MacBook Pro, but it has the advantage that both USB-C ports deliver up to 60 watts when used twice.

The endurance test for the LinkOn Ganius 136 watts

My self-designed endurance test for the power supply looked like that I occupied all ports with devices. The following consumers were used:

A CPU stress test was run on the MacBook Pro so that it could get the maximum performance from the USB-C port. I took the measurements with the USB-C multimeter from Innovateking executed.

Results with the LinkOn Ganius

The LinkOn power supply continued to deliver the maximum power of approx. 1 watts to the MacBook Pro at the 84st USB-C port when fully occupied. The port would certainly have delivered 100 watts, but my MacBook Pro didn't ask for it.

The second USB port, on the other hand, was throttled to 30 watts as soon as USB-C port 1 was occupied. 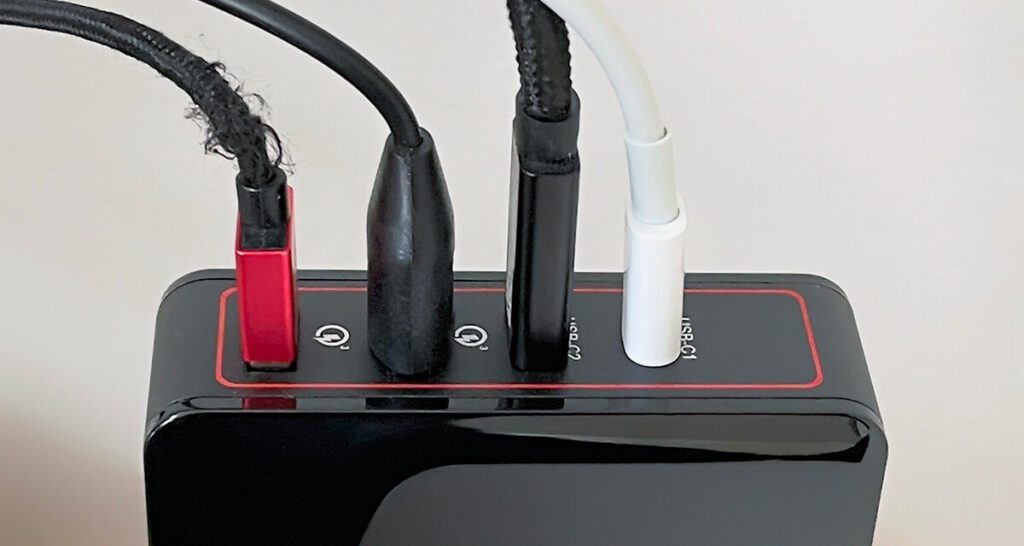 The full occupancy with all possible devices is a good test to see what is actually being supplied by the ports.

Results with the Hunda A1903

I tried the same scenario with the Hunda power supply and here the power distribution of the USB-C ports was regulated in such a way that each USB-C port could have 60 watts when both ports were occupied.

This is an advantage and disadvantage at the same time, because on the one hand the MacBook Pro is charged at every port on the Hunda, regardless of which one it is plugged into, but on the other hand it does not get the maximum performance and therefore does not load as quickly as it is on Port 1 of the LinkOn Ganius.

The LinkOn Multiport USB-C power supply is definitely a solid recommendation when it comes to supplying Apple devices, power banks and headphones with power in parallel.

The immense output power and the fact that all devices charge in parallel without complications ensures that I give the device the go-ahead. 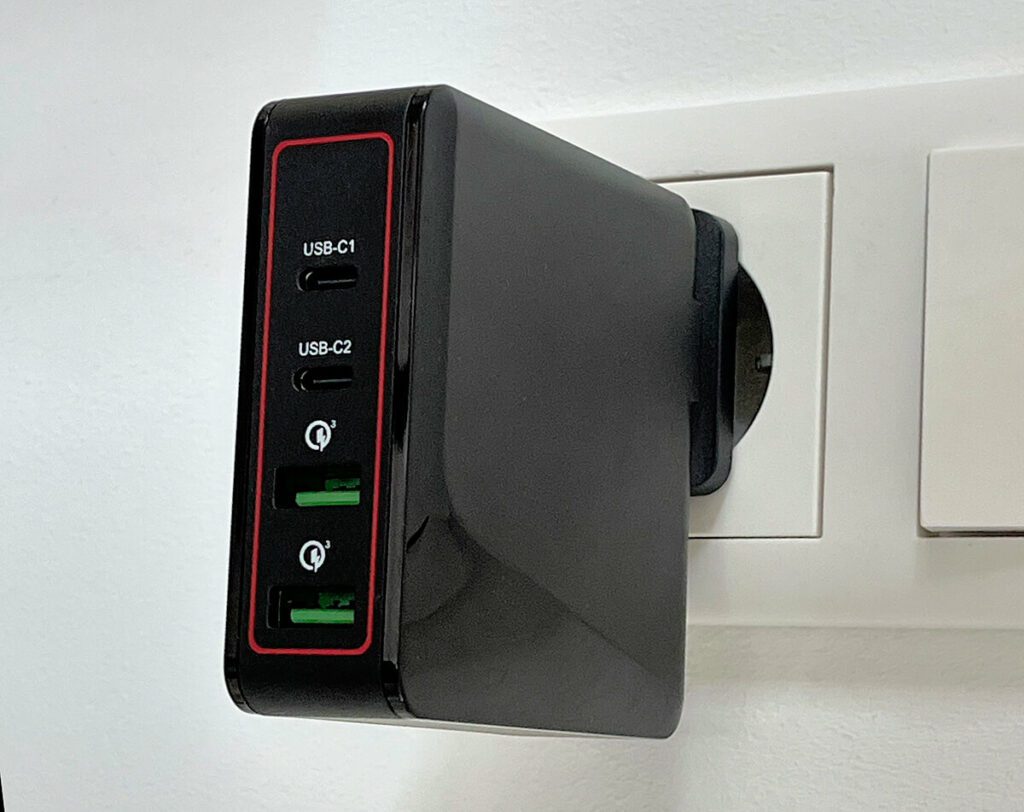 If you plug the charger into a socket, you immediately have a bad feeling because it sticks out really far and children passing by can quickly get caught on it.

In spite of everything, I personally like the Hunda power supply a little better, because in my opinion it has two advantages:

The last point for which the LinkOn device cannot do anything: The device is currently no longer available in stores. For this reason I would like to give you my recommendation for the Hunda 150 watt USB-C power supply (2x USB-C, 2x USB-A). You can get the Hunda very cheaply directly from the manufacturer via this link and you can save another 15 USD if you use the code "JensCoupon2021"Stated in the ordering process.

Hunda supports my blog with a 5 USD credit for every order and they take care of shipping costs and customs for you to send the power supply to Germany. As a service to my readers, so to speak.

However, if you are in a hurry and are ready to put more money on the table for a fast shipping through Amazon, you can also use the Hunda A1903 order here via Amazon.de.