Flat 3-in-1 power bank with Lightning, USB-C and Micro-USB plugs

It's not like I don't have enough power banks. I have a number of models flying around, but I was still missing one thing: A power bank that was as flat as possible, with a Lightning connector, a USB-C connector and a micro-USB connector. After a little research, I found what I was looking for: the NebulAcc Powerbank offers everything I wanted.

Unfortunately, the NebulAcc model is no longer available, but I was able to find a power bank that also has Lightning, Micro-USB and USB-C plugs. In addition, with 9000 mAh it has almost twice as much capacity as the NebulAcc Powerbank. If you are still looking for such a power bank, you will find it ElephantStory Powerbank the right choice. 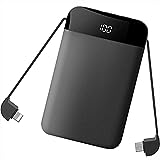 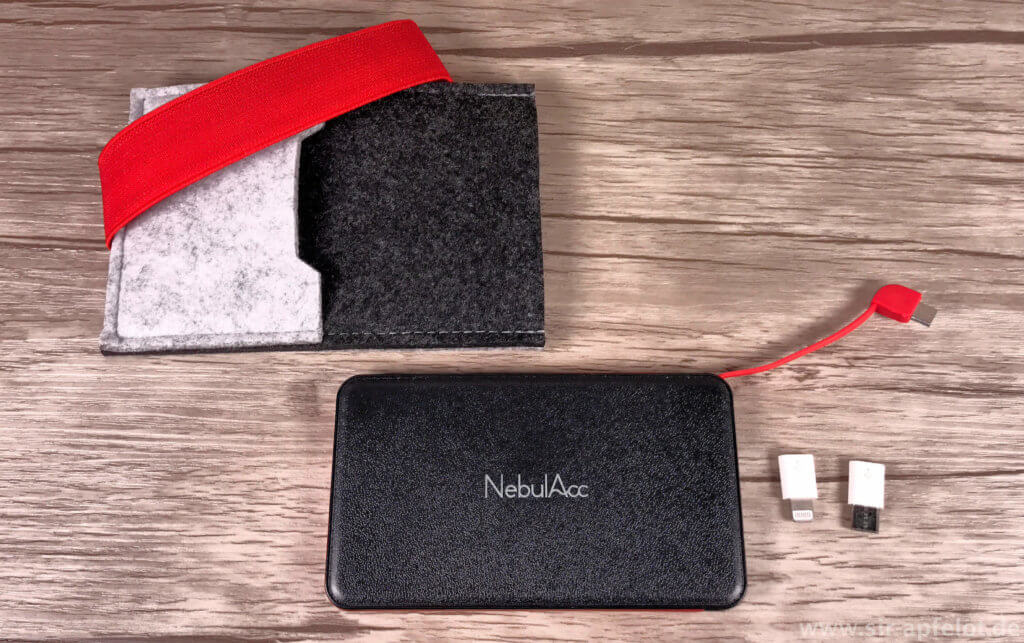 The NebulAcc Powerbank comes with a felt cover and two adapters from Micro-USB to Lightning and USB-C (photos: Sir Apfelot).

With the NebulAcc additional battery, the micro USB plug is firmly connected to the power bank with a ribbon cable. There is also a micro-USB to USB-C and a micro-USB to Lightning adapter. This gives you a lot of options when it comes to connecting to a wide variety of devices.

This variety of plugs was important to me, as I can use my iPhone as well as headphones, the DJI Mavic Pro or the DJI Spark as well as charging my little MacBook. The power bank should be flat so that I can take it with me in my MacBook bag and in my bag for the Mavic Pro or Spark without any sharp edges "threatening" the rest of the equipment in the bag.

With the battery, NebulAcc supplies a very nicely made case made of felt, which has a small slot for an adapter. Unfortunately without a reliable locking option.

For the sake of completeness, I would like to briefly list the "specs" of the power bank:

As an accessory, in addition to the adapters, there is also a small transport bag made of felt that holds the power bank in the main compartment, while the small mini pocket on the front can be used for other accessories. A sewn-on rubber band holds the battery in the bag. 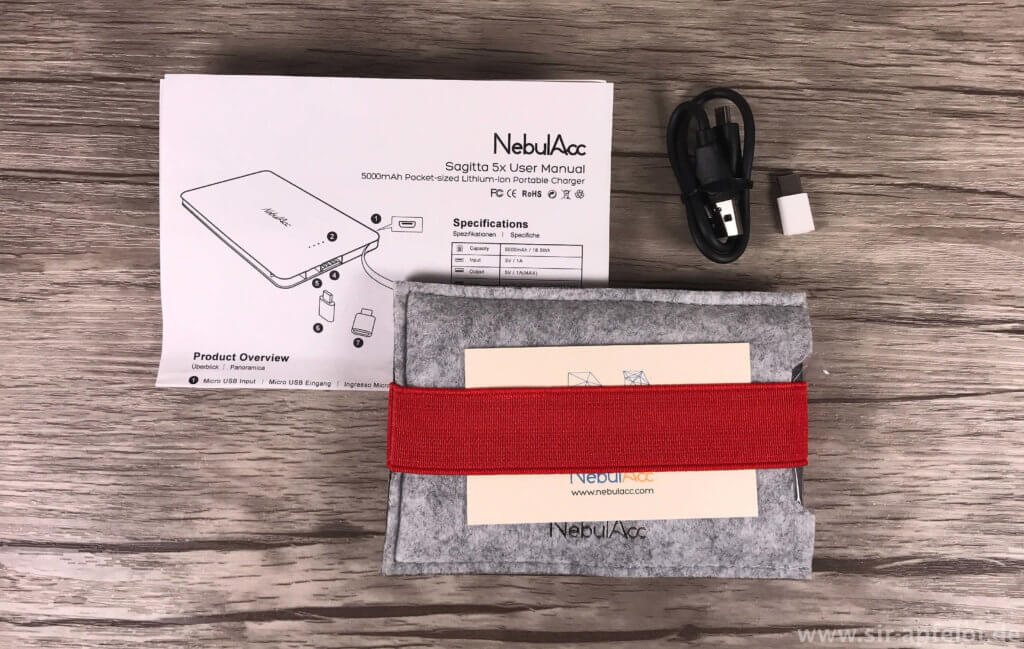 Here you can see the complete scope of delivery of the power bank. You don't really need the instructions, because the operation of the additional battery is very easy.

A special feature of the NebulAcc Powerbank is in any case the flat design, which roughly corresponds to the thickness of my iPhone 7 Plus with a case. In terms of size, it is significantly smaller than an iPhone 7 Plus and is more comparable to the iPhone SE or iPhone 5.

Another practical thing about the additional battery is a small compartment in the battery itself that holds an adapter. Since the compartment is covered by the ribbon cable when the power bank is not in use, the adapter cannot fall out. It is so stuck in the compartment that you can only get it out if you insert the micro-USB connector and pull out the adapter.

A very nice idea is the small slot in the power bank, in which one of the two adapters can be accommodated. Unfortunately, you can't get the adapter out with your finger, but if you plug in the charging cable, you can pull it out.

And unfortunately there we are already at my only point of criticism: Unfortunately, there is only space in the power bank for one of the two adapters. That means, one of the two adapters is always "flying" around somewhere. With my (lack of) order, it is only a matter of time before it will be gone. Now you might think that the felt bag still has space for the adapter. That is also correct, but unfortunately the small compartment in which the adapter could be placed cannot be closed properly and it can fall out during transport.

The built-in micro-USB charging cable can easily be sunk into the corner of the additional battery and does not take up any more space.

Aside from the disadvantage, the power bank is very easy to use. You pull the flat cable out of the side of the power bank, attach the adapter (if one is necessary) and plug the cable into the device that is to be charged. There is no button or the like with which one could query the "fill level" of the battery, but as soon as a consumer is plugged in, the NebulAcc additional battery shows its current capacity with four blue LEDs.

Charging current in the test

To test how much charging current the battery delivers, I tried it out in comparison with a rather thick Anker battery that delivers up to 2,4 amps of charging current with the PowerIQ function - provided that the device that is to be charged draws also so much electricity. In practice, I have found that my iPhone 7 Plus only uses a little more than 1,1 amps as charging current, while my iPad Pro 9,7 inches already draws 1,7 amps of charging current. I have never been able to measure the aforementioned 2,4 amps, which are so popular in advertising, and from my point of view only occur on the 12,9-inch iPad Pro or MacBooks. 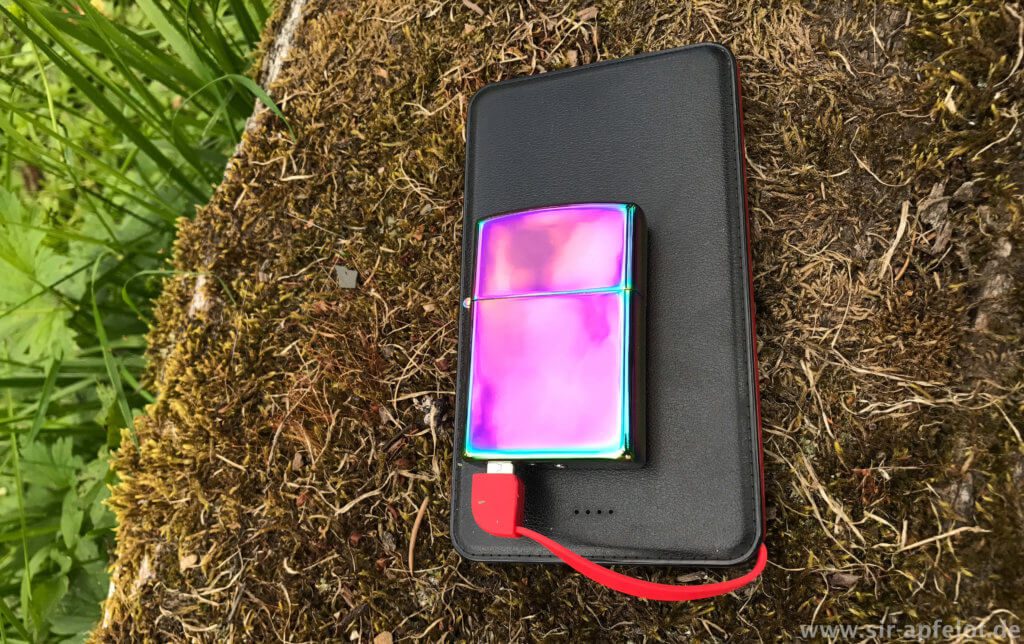 Here the Nebul Acc Powerbank is in use with mine Plasma lighterthat can be charged via micro USB.

The values ​​of the NebulAcc additional battery were only slightly below those of the Anker battery. Although only 1 ampere maximum output current is specified in the manufacturer's description, in practice it delivered over 1,2 amperes of charging current. A good value, I think ...

A quick note on MacBook operation: If the MacBook is in use, it will indicate that it is being charged, but the battery capacity will practically drop, which is due to the fact that the additional battery does not provide enough power to charge the internal battery while the MacBook also needs power. If you close the MacBook, it requires significantly less power and the power bank charges it gradually.

So I would say that the power bank is more suitable for smartphones, tablets or smaller consumers. Laptops require too much power in a short time, which the power bank cannot supply. The 1,2 amps are simply not enough for laptops if they are still in use while they are charging. 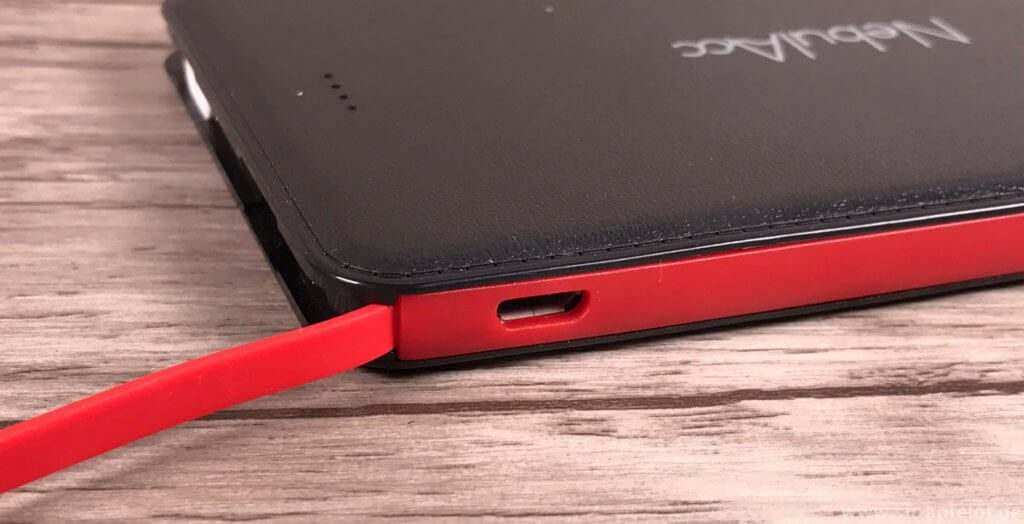 The NebulAcc additional battery is charged via a micro USB port, which can be found on the side of the device.

Conclusion on the NebulAcc battery

As already mentioned, there are certainly additional batteries that have more capacity and also charge connected devices with a higher charging current. The NebulAcc additional battery can score neither in terms of a particularly large capacity nor in terms of a high charging current. The advantage of the NebulAcc lies instead in the flat design and in the fact that you get two adapters for Lightning and USB-C, some of which even find a place in the power bank itself. In my opinion, there is not much to complain about about the additional battery and I am glad I made the selection. If I could make a suggestion for improvement to the manufacturer, it would definitely be a place for the second adapter, so that an additional transport bag is superfluous. 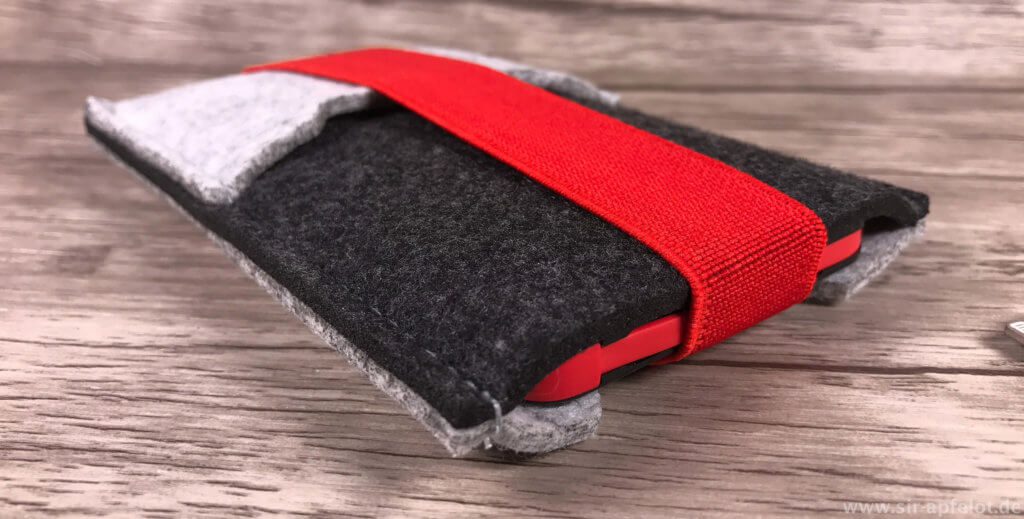 It's a shame actually. If there was also a slot for the second adapter in the power bank, I would have no more wishes. For example, you have to transport an adapter in the compartment of the felt cover.

In practice, this additional battery with the adapters saves me having to carry two to three charging cables that I would have to pack with a normal power bank. For this reason, the NebulAcc Powerbank - even with the restriction mentioned above - is a recommendable accessory that I can recommend with a clear conscience.

Do you have power banks that serve you particularly well? Then I would appreciate your opinion and recommendations in the comments!

Since the NebulAcc Powerbank, which I am writing about here in the text, is no longer available, I would like the ElephantStory Powerbank recommend, which also offers the positive properties and connections of the NebulAcc, but also has more capacity.