The mobilefun.de team recently sent me a mobile BT speaker for test purposes. The model is called "BoomBrick"And is from the manufacturer" Olixar ". In the meantime I've already had the opportunity to try out a number of BT speakers in various price ranges. In this case, the wireless loudspeaker is around 40 EUR - so it is more in the lower price segment. 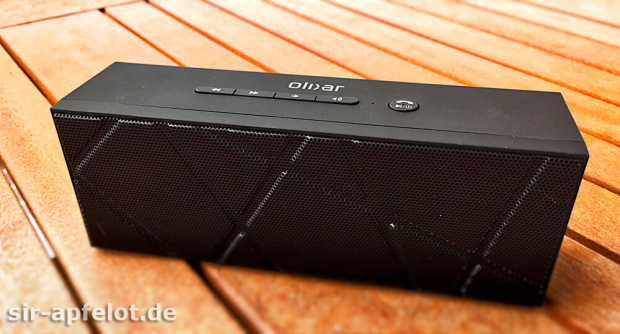 This is what it looks like, the BT loudspeaker from olixar called "BoomBrick" - in the form of a brick (Photos: JK).

Why do I need a BT speaker?

For those readers who are still wondering why you need a mobile speaker: These small devices are very useful if you carry all your music around on your smartphone, but are not satisfied with the sound of the smartphone. Via Bluetooth, you can very quickly couple the iPhone with the BT loudspeaker and then enjoy the better sound through the loudspeaker. I use this option, for example, to listen to music on the balcony, in the bathroom or in the kitchen, but of course you can also use your new sound system in the garden, by the lake or anywhere else - you are quite independent thanks to the battery operation.

In addition to the connection via Bluetooth, there is also Wireless loudspeakers, which, however, mostly work with their own radio transmission. The advantage of these speakers is that they often have a longer range than BT transmission could allow. The disadvantage, however, is that with a "base station" you usually have to feed the music via cable, which in turn is a bit cumbersome and takes away the freedom that you actually want with the "radio technology".

Technical details about the BoomBrick

The Olixar musical stone has approximately the dimensions 18 x 5 x 6,5 cm. The weight of a good 430 grams is largely due to the 1200 mAh battery, which allows a good 8 hours of music playback and can be recharged in just under 3 hours. As with most mobile speaker systems, the BoomBrick also has a 3,5 mm jack input to connect an MP3 player or other audio playback device via cable. This cable is included with the BoomBrick, just like the [Micro-USB charging cable-> USB charging cable]. 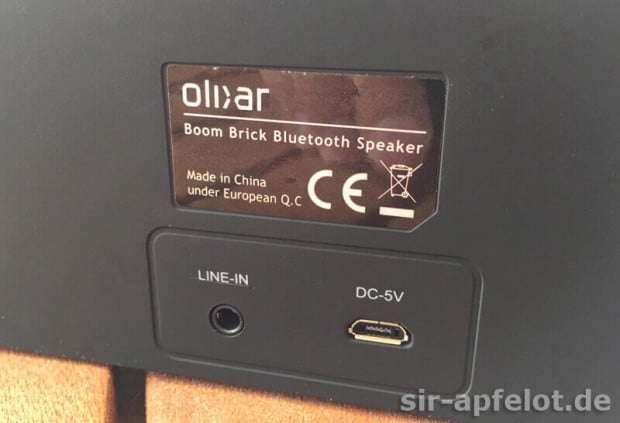 The connections of the olixar Bluetooth loudspeaker are located on the back: a charging socket with micro-USB and a jack input for feeding in audio via a cable. 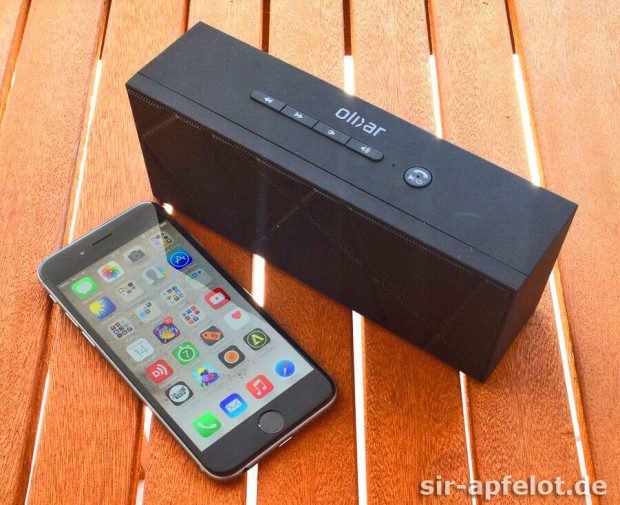 If you put the iPhone 6 on the table compared to the BoomBrick, you can see that it is much smaller than a brick.

Pairing and operating the mobile speaker

The pairing works quite quickly. After switching on the BoomBrick, it went straight into pairing mode. I then found the device called "OlixarBoom" on my iPhone under "Settings" -> "Bluetooth" and paired the iPhone with it. If you now start the music playback on the iPhone, the audio signal is transmitted directly to the BoomBrick.

The controls can be found on the top of the BoomBrick.

On the top of the device you will find some control elements that enable, for example, "song forwards" and "song back", as well as a volume control. The volume setting is separate from that of the iPhone. This means that the buttons do not send a signal to the iPhone to get louder or quieter, but the amplifier in the BoomBrick itself is switched louder and quieter. The iPhone can also be used to influence the volume.

The microphone in the BoomBrick can also be used as a hands-free device to answer incoming phone, audio FaceTime or Skype calls. I haven't tried how the sound comes across to the caller.

Conclusion: The sound of the battery-powered BT speaker from Olixar

As always, the sound is the decisive criterion for speaker systems. From the operation and the functions actually leave almost all BT speakers no more wishes open. As a rule, almost all of them also have the ability to speak hands-free. When it comes to sound and price, however, tastes differ. Of course, you can't expect a sound from the BoomBrick produced by a 200 EUR BT speaker. The price difference and thus the quality of the materials used is simply too different for that. For this reason, from my point of view, it does not get the sound of the Jawbone Big Jambox approach. With other cheaper bluetooth boxes like that Terratec Mobile Boost However, the BoomBrick can certainly compete.

From my point of view, the Bluetooth box is well suited for music sprinkling on a smaller scale. On the desk, in the bathroom or in the kitchen, it fully fulfills its purpose. With a garden party where people also speak louder, it should reach its limits, as it simply does not provide enough bass at higher volume. However, this is not an issue at lower volume. All in all, from my point of view, a good price-performance ratio.

My (high-priced) alternative tip for a better sound

If you actually need speakers with more bass and higher volume, you should look around for higher-priced models that may also be a bit larger. My tip for people who don't pay too much attention to money and are willing to invest a little more for good sound: The Bose Sound Link Speaker III. It's a bit bigger, costs around 250 euros and has a stunning sound that you simply wouldn't expect from a system of this size. It should also be enough for small garden parties. :)