In the test: Orico Portable M.2 NVMe SSD with 1 TB

The manufacturer Orico recently launched a new external storage medium whose core is an SSD that is addressed via the NVMe protocol and should therefore achieve particularly high reading speeds of up to 940 megabytes per second. In order to be able to take a closer look at the external SSD, the 1 TB version was made available to me free of charge. The exact name of the product is Orico Portable NVMe SSD.

I just received another email from Orico. So to speak, "breaking news" shortly before the article was finished: Orico is now offering two discount codes for NVMe SSDs until July 20.7.2020, 128. Once for the 1 GB and once for the XNUMX TB model.

The discount codes are entered at the checkout in the field for "voucher and promotion codes". Then the discount becomes visible in the total.

At the beginning I would like to tick off the technical specs and the functions that are important for the Orico NVMe SSD:

The fact that the Orico SSD is formatted on NTFS shows that it is more aimed at Windows users as a target group.

You can already see that the Mac users are not the main target group, because when you connect the drive to the Mac, every action is acknowledged with the message that it is protected. The reason for this is that macOS can't do much with NTFS volumes. Files can be read, but to save something on them you have to have special extensions like Microsoft NTFS for Mac use.

If you want to operate the Orico SSD on a Mac, you should use it for this reason Reformat to APFS or Mac OS Extended (upper and lower case).

Reformatting the Orico SSD with the hard disk utility on the Mac only takes a few seconds.

I'm not a big hardware crack - even if some readers would guess. For this reason, I have to read up a bit of knowledge myself with such products in order to describe where the special features lie. I'll try to describe it in simple words and hope that I don't make any blunders in the explanation.

External SSDs have been found in stores and with the for a long time TEYADI SSD I only had a cheap copy in the test a while ago, but it wasn't really convincing. The SanDisk-Extreme Portable SSD is also an external storage solution that I use again and again.

While the SanDisk Extreme Portable is a very solid storage solution and offers data rates of 400-450 MB / s, the Orico Portable NVMe SSD wants to almost double this. From a technical point of view, the magic word is “NVMe” or, in long form, “Non-Volatile Memory Express”.

While most of the cheaper SSD solutions run via SATA, Orico uses the NVMe SSD, a transfer protocol that does not run via SATA via the PCH, but is directly connected to the PCIe interface. This enables technically higher data throughputs. Due to the lower latency, this is also noticeable in practice when writing many small files.

The Orico SSD can also be attached to a backpack with the eyelet (Photos: Sir Apfelot).

Optics and processing of the Orico NVMe SSD

If you look at the transportable SSD from Orico, the first thing you notice is the ring on which you can hang the SSD on a bag or a bunch of keys. Of course, the SSD - even if it is only the size of a lighter - is not quite as suitable for a keychain, as it is bulky in your pocket, but you can easily hang it on your backpack, laptop bag or other things.

The shape is very hand-friendly and has hardly any corners or edges. Accordingly, there is little to worry about about damage. Since the housing is made of aluminum, I might not pack the Orico SSD in a backpack with the MacBook. There may be scratches from sand or dust if the two aluminum surfaces rub against each other.

Otherwise, the Orico Portable NVMe SSD (model GV100) looks very valuable and neatly processed. There are no gaps in the case and the USB-C port is neatly built in.

What I am missing is a statement about the water protection class. While the SanDisk Extreme Portable has a reference to the IP55 protection class, which certifies, for example, protection against splash water, there is no information about this on the Orico SSD.

In addition to the SSD, the scope of delivery also includes a USB-A to USB-C cable and a USB-C to USB-C cable. Both are quite short at 23 cm, but sufficient for my purposes.

The external SSD can also be connected to the iPad Pro via the USB-C port and used as a storage expansion device.

To find out how fast the Orico NVMe SSD actually is, I connected it to my Mac once directly via USB-C and once via my (highly recommended!) Orico USB hub via USB-A.

I also connected the SanDisk Extreme Portable SSD (2 TB capacity and SATA model, so no NVMe) and ran the same speed tests.

I have the hard drive benchmarking with me Aja system test carried out and run each test five times in order to then form an average value. However, there were no major outliers in the individual measurements.

I ran the test on my MacBook Pro 2017 - as usual with me with many open programs and without closing background processes. So they are realistic values.

With a good 900 MB per second, the Orico NVMe SSD is currently the fastest external storage medium on my MacBook Pro.

Here are the results (average values):

You can clearly see that the transfer with the NVMe protocol is significantly faster than the use of a SATA SSD. At the same time, however, it becomes clear that you can save the price surcharge for an NVMe drive if you don't have a Mac with a USB-C interface. If you connect the Orico SSD via a USB-A port, the data rates are roughly on par with the significantly cheaper SATA SSDs, which are also available as external storage solutions.

In my test, I compare the SATA SSD from SanDisk with the NVMe SSD from Orico - the speed difference is more than clear, but also noticeable in terms of price.

Price comparison of the Orico SSD with SanDisk

For me personally, in addition to the transmission speed, the price per gigabyte is always an important factor when choosing an SSD.

The SanDisk Extreme Portable cannot be used for comparison with the Orico NVMe SSD due to its low speed. But SanDisk offers with the Extreme Portable Pro also a model that is based on the NVMe protocol and thus the same data rates as the Orico SSD reached. If you look at the prices on Amazon (as of June 30.06.2020, XNUMX), you can see that the SanDisk SSD is usually cheaper. 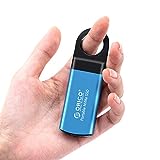 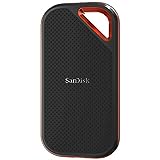 Orico currently offers a 10% discount coupon that can be activated directly on the product page. With this discount you get for the 1TB variant to 215,99 EUR and is thus even below the SanDisk solution.

Only if you are looking for an ultra-fast SSD with 2 terabytes, Orico cannot currently offer a model and you can go to SanDisk Extreme Pro SSD to grab.

Next to the USB-C connection is a small, blue status LED that shows that it is ready for operation.

My conclusion on the Orico Portable NVMe SSD

I think Orico has developed an extremely fast "hard drive" with the external NVMe SSD, which all photographers and filmmakers who regularly have to move a lot of data back and forth should be happy about. The data rate can only be topped if you connect an external SSD with a Thunderbolt 3 port to a modern Mac - but here we also play in completely different price ranges.

The Orico SSD leaves nothing to be desired in terms of processing. I think she will survive even rough handling and one or two falls without any problems. The only thing I am not sure about is contact with water, as I do not have any IPX certification at the product.

Otherwise you acquire with the Orico NVMe SSD an absolutely usable external drive that you can use perfectly 1: 1 backup hard drive. I have 1 TB capacity on the internal system SSD in my MacBook Pro, so I can use Carbon Copy Cloner or SuperDuper every now and then create a bootable backup in a short time.

The Orico SSD comes with a USB-A and a USB-C cable to connect the external disk.