In the test: RAVPower USB-C charger with 65 watts and USB Power Delivery

I haven't received a new product from RAVPower for a while. So I'm all the more pleased that you now give me the RAVPower USB-PD charger with 65 watts so that I can take a closer look. The charger has a USB-C and a USB-A port and thus offers the possibility of charging devices such as MacBook Pro, iPad, iPhone, power banks or other smartphones or tablets. 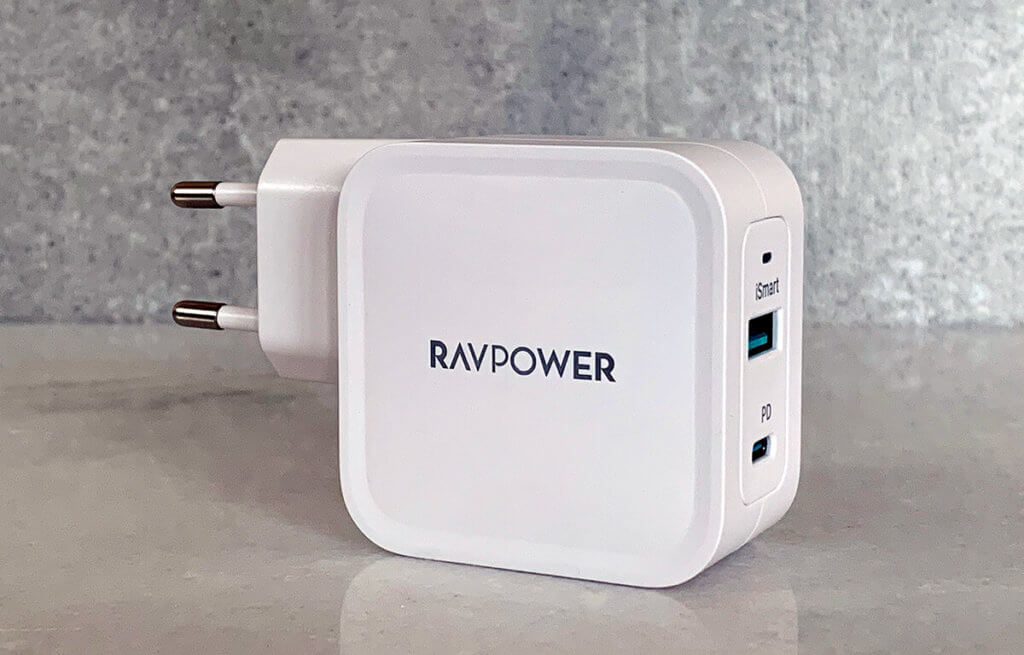 With the sending of the power supply, RAVPower offered me to set up a discount code for my readers. You can use this to buy the power supply at a reduced price at Amazon.

Technical data of the RAVPower RP-PC133

The technical specifications are of course part of every test. For this reason, here are the most important data in brief:

My measurement results for the RAVPower PD Pioneer

I determined the following values ​​through measurements with my USB multimeters and a USB load resistor: 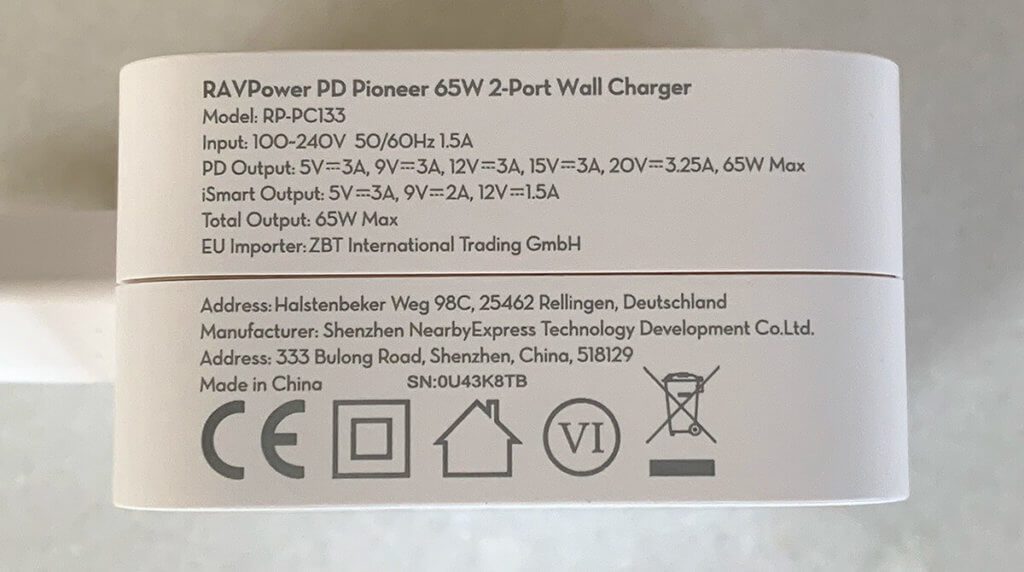 The technical details can also be found printed on the RAVPower power supply itself.

No charging cable is included in the scope of delivery. It should be noted, however, that you should use an appropriate charging cable with an E-Mark chip when charging via the USB-C port in order to obtain maximum performance. Here would come for example this one from Nimaso or this one from Spigen into consideration. I got one on my test Thunderbolt 3 USB-C cable from CableMatters used and this also supported full performance. 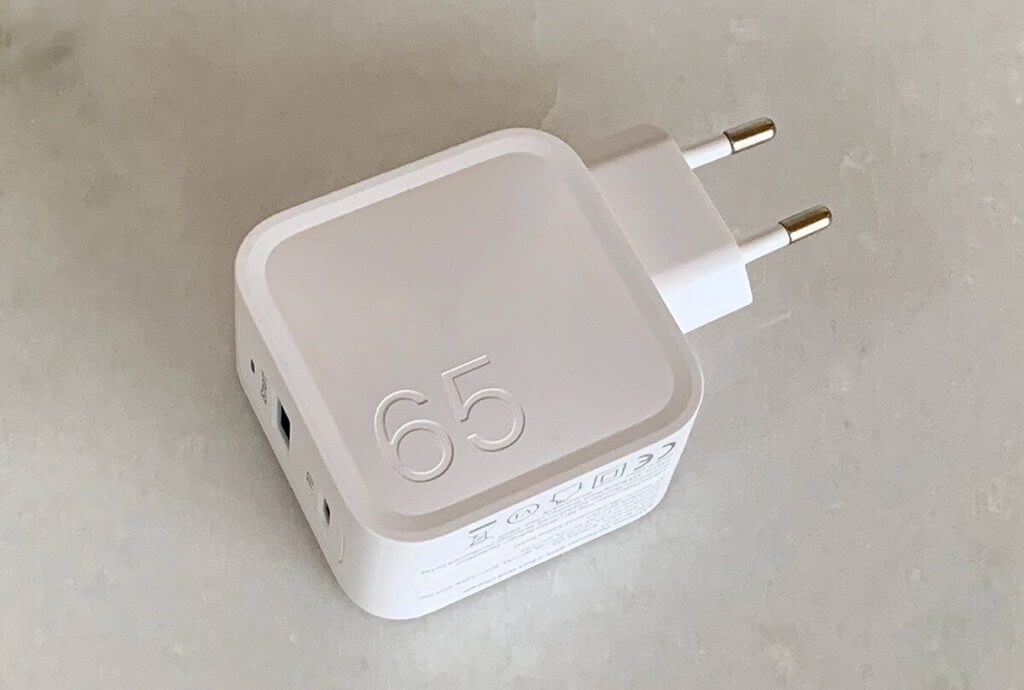 Apple established the color white in the computer field. I am very happy that it is also catching on with accessory manufacturers.

By using the gallium nitrite chips, the design of the plug-in power supply is very small. This makes it the perfect companion when traveling or on the daily commute - but of course it also does its job in the home office. For me it will probably end up in my laptop bag so that I always have it with me when I'm on the go with my MacBook Pro and my iPhone.

I find the look appealing and elegant. I'm glad that the white color is getting through to the power supplies, because the black boxes on the walls don't look particularly nice.

The workmanship is also good and shows no defects. The plugs sit well in the sockets and the housing does not show any gaps. From that point of view there is nothing to complain about. 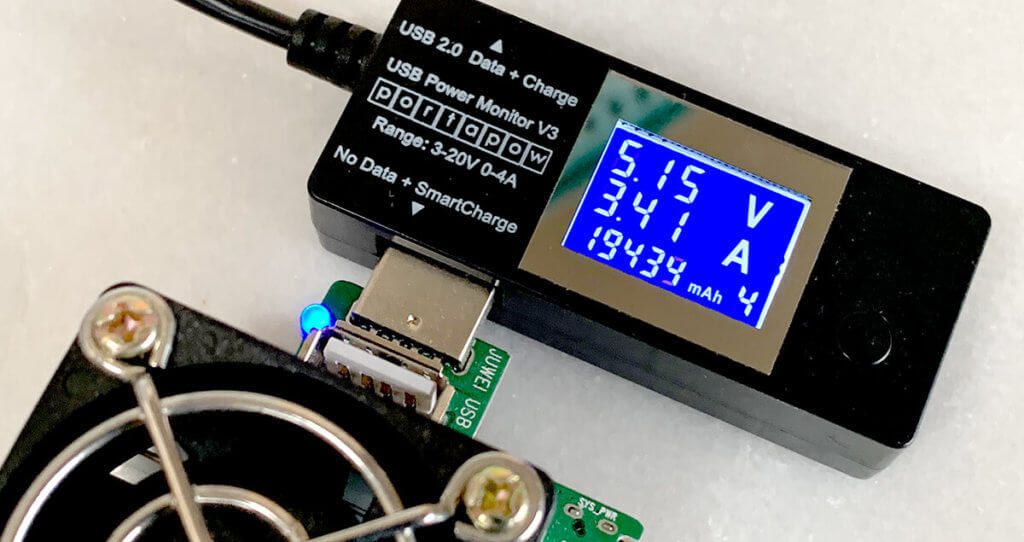 The RAVPower power supply only switches off at a value of approx. 3,5 amps at the USB-A port in order to protect the electronics.

The maximum output of 65 watts is also sufficient for large MacBook Pro models. My MacBook Pro 15 inch from 2017 would like to charge with approx. 80 watts - if it is below 70% charge - but the 65 watts of the RAVPower power supply are easily enough.

It is also no problem to charge an iPad and a MacBook Pro at the same time on the RAVPower power supply. In my test, the MacBook Pro - even though it was in use - still gained one percent of battery life per minute. The power adapter gets warm, but not insanely hot. I scanned the surface of the housing with my laser thermometer and the temperature fluctuated between 32 ° and 52 ° Celsius. The 52 ° C was only measured at a small hotspot. It was therefore no problem to touch the charger. 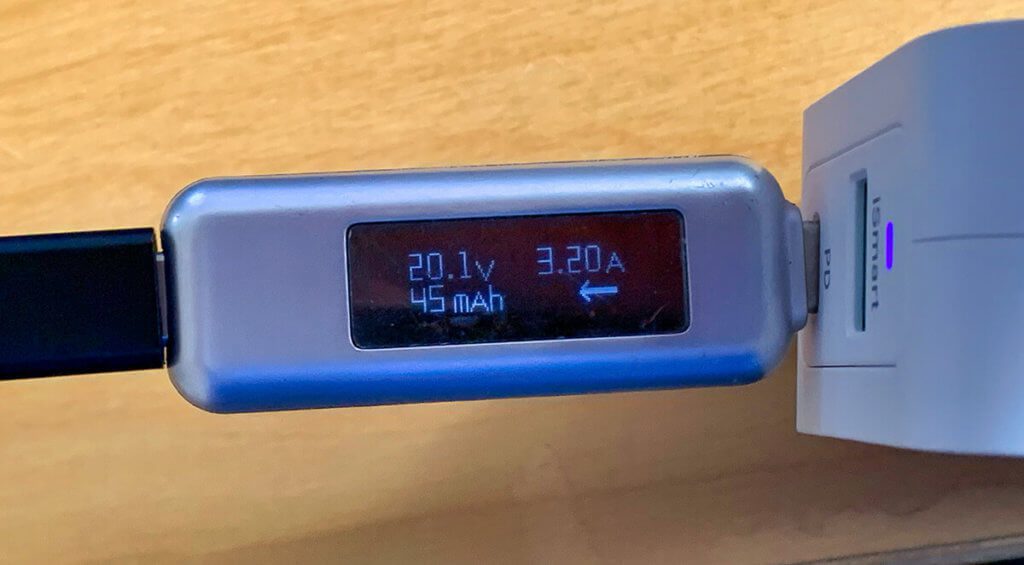 With some dual-port power supplies from other manufacturers, the power distribution is separated by port. This means that the USB-C port on some models delivers a maximum of 45 watts - even when the USB-A port is not in use. This is of course not very helpful in practice, because the remaining power that is not queried for the USB-A port could perhaps be used well with the USB-C port if you want to quickly charge your MacBook Pro there.

This is exactly where the RAVPower power supply scores points, because it delivers up to 65 watts at the USB-C port and this power only drops to 60 watts and I was able to use mine at the USB-A port USB load resistance still 5,15 volts and 3,33 amps - so draw approx. 17,15 watts. Together with the 60 watts of the USB-C port, that makes a total of 77 watts.

The good thing is - no matter how hard you load the USB-A port, the power at the USB-C port never falls below 60 watts. This ensures that a MacBook is always charged quickly at this port. 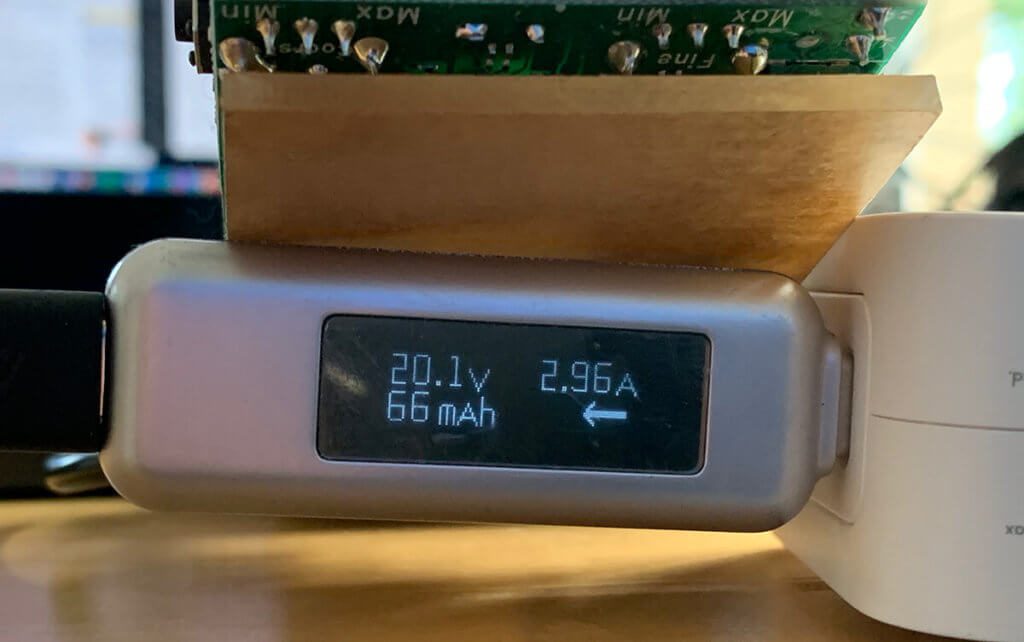 Even when the iSmart USB-A port is under heavy load, the device still receives almost 60 watts of power for charging at the USB-C port.

Incidentally, the USB-A port switched off at 3,5 amps. But none of my devices that are charged via USB-A need that much.

Stand-by consumption under one watt

What I'm always interested in with chargers like this is the power consumption that the device has when no consumer is connected. Fortunately, the modern plug-in power supplies are usually energy-saving, but remeasuring is never a bad thing.

My meter for energy consumption shows 0,3 watts for the RAVPower power pack. The value is certainly not official, as the usual measuring devices show inaccuracies, especially at low outputs, but I take that as a risk.

If we assume 0,3 watts of power in standby, we end up with an assumed electricity price of 30 cents at an annual cost of 0,79 euros - if the power supply is plugged in around the clock. So an acceptable value.

The stand-by consumption of the RAVPower PD Pioneer is around 0,3 watts - an absolutely acceptable value (photos: Sir Apfelot).

My conclusion on the RAVPower USB-C charger

As a rule, the companies advertise things that represent the practice more positively than it is in the end. With this power supply, exactly the opposite is the case: RAVPower advertises with 65 watts of power, and according to my measurements, the power supply even delivers 77 watts. The 65 watts are only the maximum power that can be taken from the USB-C port.

I really like the compact design and the simple, elegant look. The ports are easily accessible and the performance is impressively high for the size of the power supply unit.

If you want to buy it, you will find it here at Amazon or via this product box (do not forget the discount code: 7ZLS8W7Q):