Do you know RIVA Audio? To be honest: I didn't know the manufacturer until a few weeks ago either. A press release came in that reported on the RIVA Turbo X "Premium Bluetooth Speaker". Well, press releases are nice, but I like to write about things that I've tried. So I ordered the loudspeaker (model name RTX01B-UN) and a little before delivery read about the company "RIVA Audio". 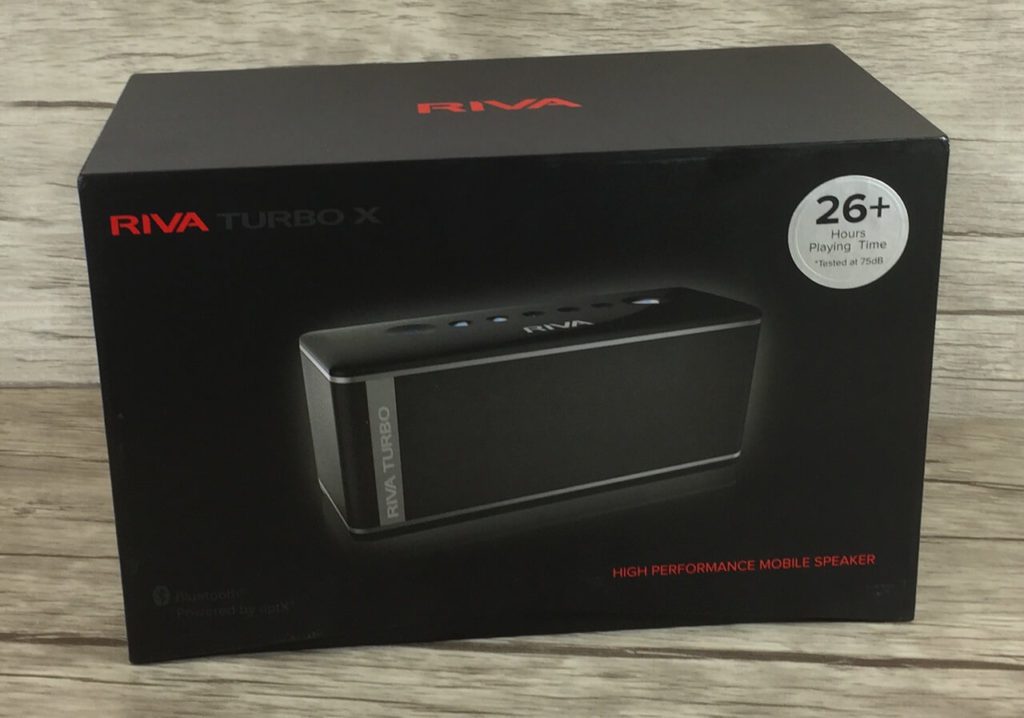 Packshot: This is what the packaging of the RIVA Turbo X looks like. Noble and timeless in design - like the RIVA Bluetooth speaker itself (photos: Sir Apfelot).

Before you buy a loudspeaker from RIVA, you should know that RIVA is committed to "clear sound". RIVA's founder, Rikki Farr, has over 45 years of experience in the audio field and has worked with engineers and designers to develop speakers that reproduce music as it was originally made.

It shouldn't surprise anyone that most Bluetooth speakers these days fight for supremacy with bass and the "clean" sound with balanced highs, mids and lows falls by the wayside. RIVA takes a different approach here and with the Turbo X offers a Bluetooth speaker that offers unadulterated sound. But more on that later. 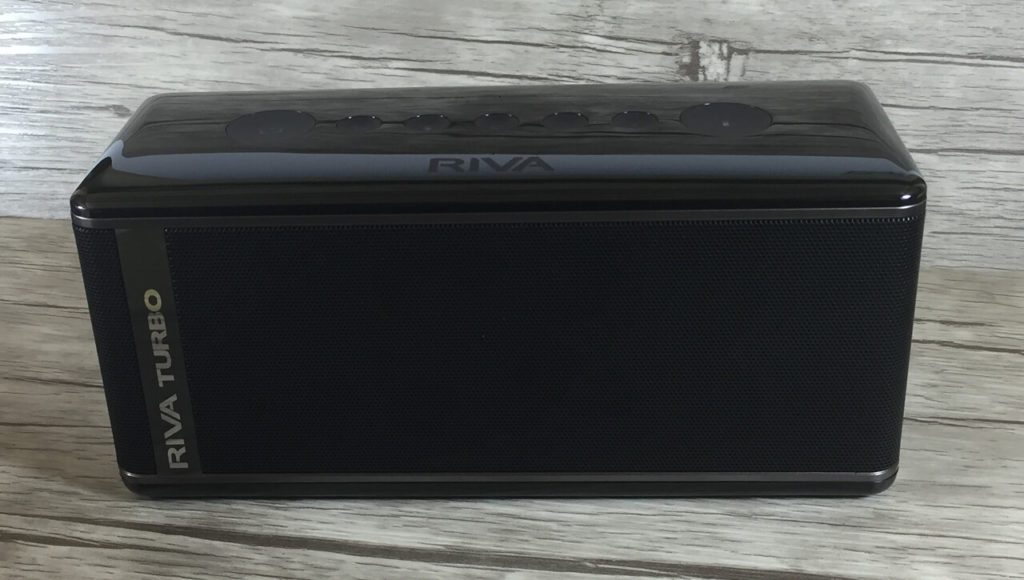 Design and processing of the RIVA Turbo X

The technical data of the Turbo X are impressive: 45 watts of music power, 26 hours of battery life and a volume of up to 100 dB in turbo mode - quite a lot for a Zwerk with a length of only 23 cm.

But let's take a look at the optics first: The design of the RIVA Turbo X is very beautiful. It's a rectangular, black box with a metal grille all around, while the top has a piano lacquer look - it goes exceptionally well with the new iPhone 7 in diamond black. ;-)

In comparison: the BOSE Soundlink Mini II on the left and the RIVA Turbo X on the right. The speakers differ fundamentally not only in terms of battery performance and size, but also in terms of bass reproduction.

On the top are the control buttons, which are also black and have blue lighting. The buttons are touch-sensitive and react to the touch of a finger. On the back there is the audio input (AUX), a USB output for charging the iPhone, a USB data input (for firmware updates), a charging input and a switch for the battery on / off. Also a rudimentary battery indicator that only knows the three states red, orange and green.

At first I found the mechanical on / off button confusing, because there is also a touch-sensitive power button on the top of the speaker. What at first seems a little pointless has a legitimate reason if you read the instructions: If you constantly operate the loudspeaker on the charging cable, you should switch off the battery, because this constant state of full charge is not good for any battery.

The mechanical battery switch on the RIVA Turbo X looks a bit antiquated, but conserves the battery. Since there is often confusion, RIVA has already provided a sticker to determine what needs to be done when charging.

So if you want to operate it in a battery-saving manner, you should half-discharge the battery and then switch the switch to "BATT Off". Then the battery is "disconnected" and the loudspeaker only works via mains operation. Lithium-ion batteries have a long service life if they are "stored" half-charged and not kept fully charged at all times. No other manufacturer has thought about this (as far as I know) - RIVA Audio obviously has.

If you look at the top with the buttons, you can see some illuminated in blue, while others are dark. To see all the symbols, all you need to do is tap the black top, which is also touch-sensitive. After a touch, all buttons are illuminated for a few seconds:

The buttons on the top of the RIVA Turbo X are touch-sensitive - as is the completely black top, which activates the button lighting when touched.

But let's go through the buttons one by one:

In addition to the illuminated controls, a female voice also ensures pleasant operation. This provides information about the low battery level, the status of the Bluetooth pairing or about switching surround and turbo mode on and off. If the "chatter" gets on your nerves, you can easily use the App switch from RIVA to "sound messages".

Otherwise, I'm not a big fan of touch-sensitive keys in general. I lack the haptic feedback and due to dry skin, the buttons on various devices often seem to ignore my operation, so that not every press of a button leads to a reaction on the part of the speaker.

Impressively clear and balanced: the sound of the RIVA Turbo X

First of all, the RIVA loudspeaker must definitely have very good sound properties. This is no wonder, because a total of 7 drivers (3 active speakers and 4 passive radiators) are built into the small music box, and the Turbo X supports the audio codecs SBC, AAC (uses the iPhone) and aptX (music enthusiasts will know this! ). If you read the Reviews on Amazon, so you are still amazed at my positive assessment, because there you often read "The loudspeaker has no bass!" and similar. Sure: Anyone who likes to listen to bass-heavy mustik and has their focus on boom-boom is wrong with RIVA - that's why the RIVA doesn't come up with mine List of bluetooth speakers with a lot of bass.

You don't have the "thumping" bass like with other speakers from Bose or UE. Nevertheless, the RIVA Turbo X definitely has no weaknesses in this area. The bass is simply "drier" and less emphasized than with other loudspeakers - which often have far too much bass. And while the Turbo X may lose its listeners to the competition in R&B and HipHop, it scores highly in the music genres of classical, jazz and pop! 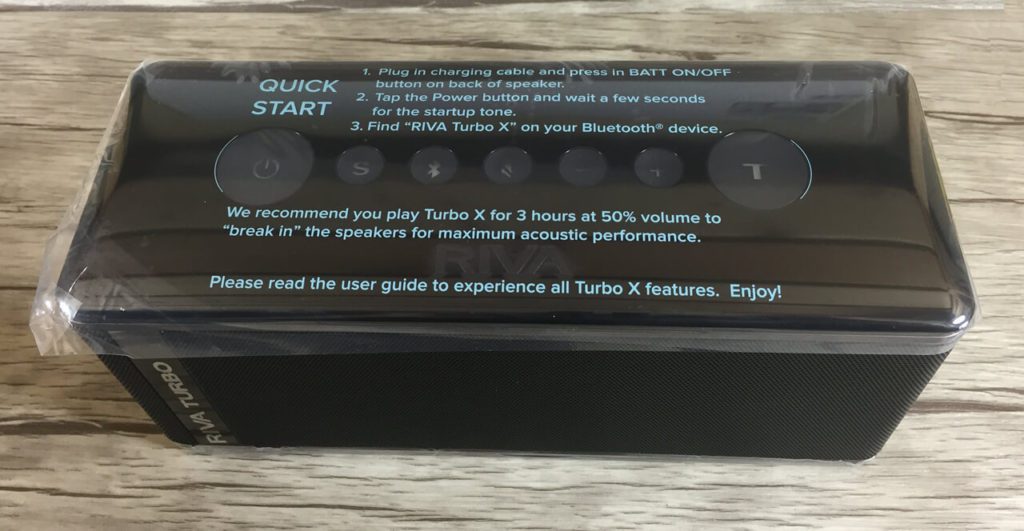 The QuickStart sticker on the RIVA Turbo X provides instructions on pairing and recommends playing the loudspeaker for 3 hours at 50% volume so that the loudspeakers can break in.

The fact that RIVA attached great importance to a balanced and good sound in terms of audio reproduction can also be seen from the fact that the "turbo" feature is not only impressive on paper. I turned up the loudspeaker completely in the test and also pressed the turbo button. I was sure to get close to 100 dB. The sound is easily enough for a room with an area of ​​40-50 square meters. And despite the high volume, there was no clinking or distortion in the sound - extremely rare for the class of small Bluetooth speakers.

The enormous battery life of at least 26 hours that RIVA promises is also not an empty promise. If you hold the loudspeaker in your hands, you also notice that the small box weighs just under 1,5 kg, probably due to a thick battery. The advantage of the large battery: you can use the USB port on the back of the RIVA Box and the appropriate iPhone charging cable also charge his mobile phone or tablet. I have not yet tested a more musical power bank. ;-)

I didn't check the 26-hour battery life exactly, but I fully charged the Turbo X and then - despite listening to music for several hours a day - it was in operation for a good 2 to 3 weeks without recharging. I think the information is okay ...

RIVA Ground Control - the app for the loudspeaker 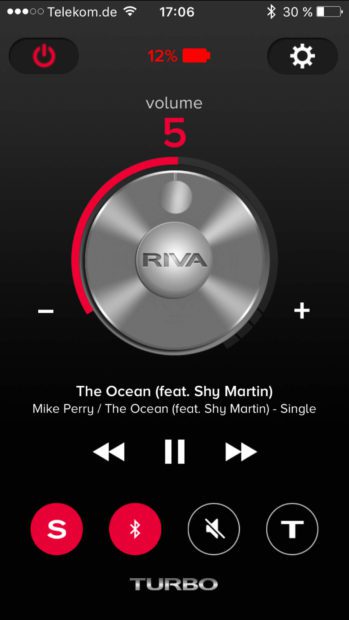 Operation of the Bluetooth loudspeaker via the RIVA Ground Control app

The companion app for iPad and iPhone from RIVA is called "RIVA Ground Control". It gives access to some controls. Starting with the large rotary wheel for volume control up to the precise battery indicator and the surround and turbo switch, you will find all the important controls and information here. The option to jump back or forward a song or to pause playback is also built in here. Personally, I don't use the app much but rather use the buttons on the RIVA Turbo X.

If you want to get the Turbo X for sound reinforcement in the garden, at the pool or on the beach, you should get it right away Transport bag made of nylon order at the same time. The loudspeaker itself is a bit prone to scratches due to the high-gloss plastic and is also not splash-proof. The inside of the bag is lined with velvet and the additional filling between the inside and outside offers a lot of protection against bumps. There is also space for cables and other accessories in an additional outer compartment.

My conclusion on the RIVA Turbo X

On the one hand, I am enthusiastic about the look and the design as well as the battery life. For me, the sound is also an aspect that clearly speaks in favor of the Turbo X, because regardless of whether it is an audio book, classical music, jazz or pop: the RIVA loudspeaker reproduces everything very clearly. With some other speakers, the bass is so dominant that you can hardly understand audio books if the speaker already has a sonorous voice - with the RIVA Turbo X none of this is a problem.

The "fly in the ointment" for me, however, is the missing play / pause button on the speaker itself. Unfortunately, I like to use Bluetooth speakers in such a way that I quickly stop and restart playback on the speaker itself. With the Turbo X, however, there is no button for this control on the speaker. You always have to take the detour via the iPhone, which I think is a shame. With a 300 EUR loudspeaker this is a serious point of criticism for me, because for the price you want a "perfect" device.

If you don't need the play / pause button due to your habits and prefer a clear, balanced sound for your music, the RIVA Turbo X is an excellent, mobile Bluetooth speaker with an extremely long battery life.