There are many ways to charge the Apple Watch, but that Satechi USB-C charging dock is certainly one of the smallest. I received a copy from the company to write a test report and therefore put it under the microscope. 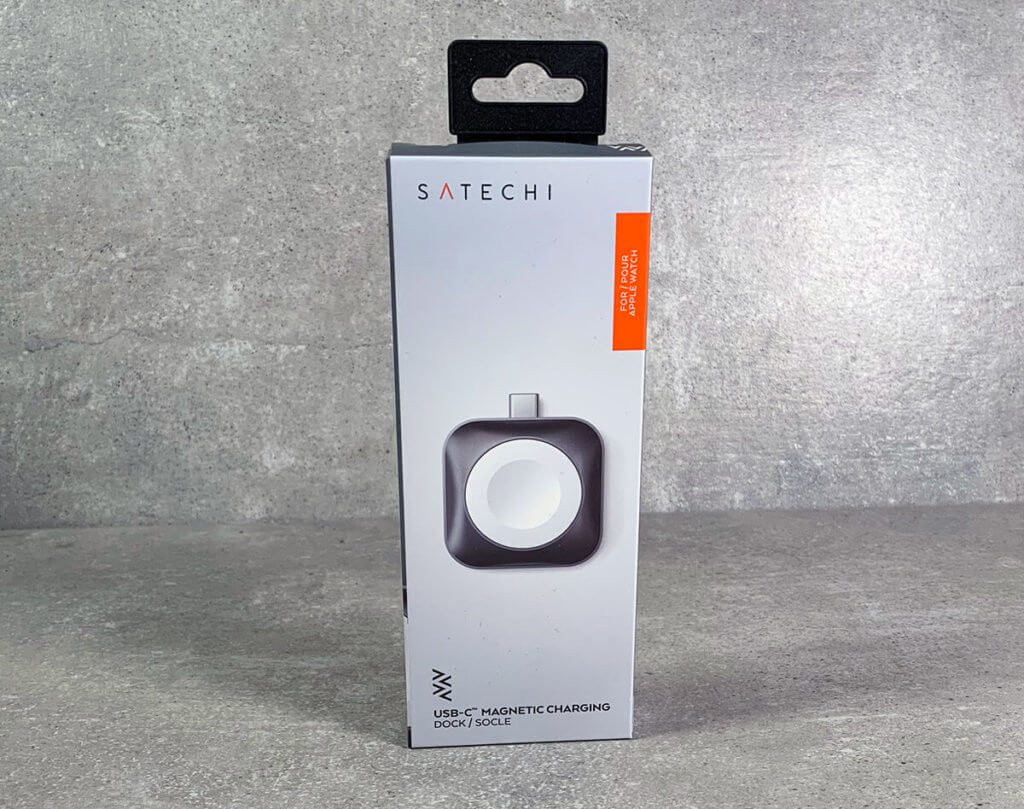 The packaging of the Magnetic Charging Dock from Satechi already shows how small the charging dock is (photos: Sir Apfelot).

The white plastic insert that represents the charging cradle is a bit out of the ordinary, but I assume that Apple has precise specifications here as to how this element should look.

The housing of the Magnetic Charging Dock is made of aluminum and so the device sits comfortably in the hand due to its weight.

The Satechi charger for the Apple Watch is neatly processed and matches the color of the space gray of the Apple Macs and iPads.

The charging puck is actually intended for use on the USB-C port of the iPad Pro, but of course it also works reliably on other devices with USB Type C sockets, such as MacBook, Mac Mini, iMac or on power banks with USB-C output.

Since the device does not have a cable, but the plug is installed directly on the device, there is a potential risk of unintentional movement pressing on the charging dock and thus strong leverage on the USB-C port.

For this reason, I would recommend using the dock either with a short USB-C extension or placing the iPad Pro or MacBook on the table so that the Satechi puck lies neatly on the surface. This minimizes the risk and you can safely supply your Apple Watch with power.

Satechi offers a USB-C extension as an accessory for the Magnetic Charging Dock, which minimizes the dangerous lifting effect on the USB-C port (Photo: Satechi).

Due to Apple specifications, no charging cable included

You might wonder why Satechi didn't put a small USB-C extension in the box right away. The reason for this is that Apple would not license the dock if a cable was included. Satechi originally intended to do this, but was unfortunately thwarted by the Apple license conditions.

Those who prefer to use the device with a USB-C extension can get one short USB-C extension from Satechi that fits directly to the Magnetic Charging Dock. Satechi developed this short cable especially for the magnetic charging dock, as they weren't allowed to build a fixed cable to the device. 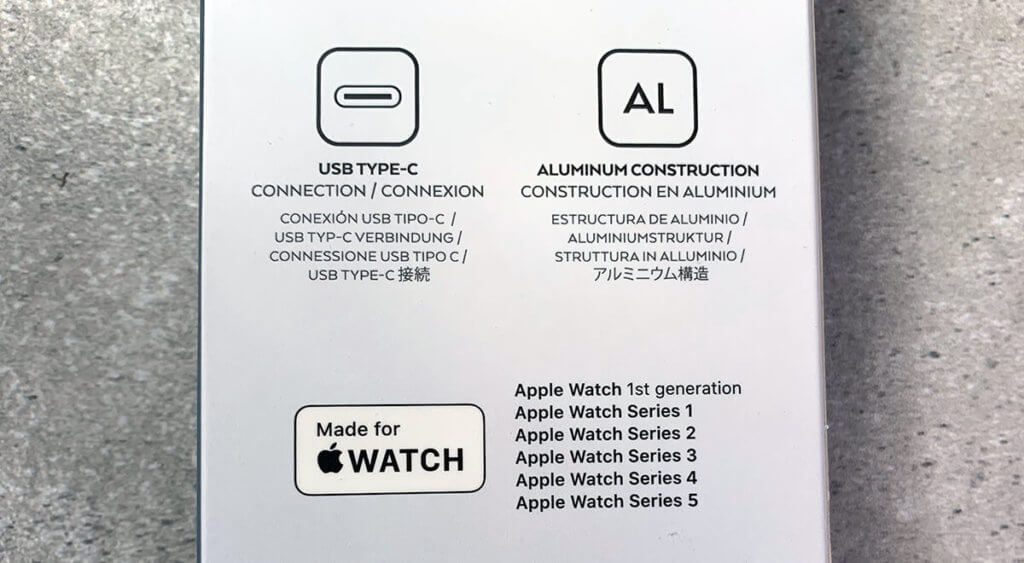 The Satechi charger is compatible with all Apple Watch models.

Of course, I'm interested in how the loading speed behaves. With some Apple Watch charging cable replicas, you can often find gruesome reviews from users who charge the watch forever.

If i mean Original Apple charging cable when I connect it to the watch (I have the Series 3), I get an easy-to-remember value of about 1% per minute. The Satechi charging dock is around 20% in my 16 minute test, which is a tick less than the Apple charging cable manages. Nevertheless, very few users should notice the difference in everyday life.

In my charging test, the device was able to fill 20% of the battery in 16 minutes, making it a bit slower than the Apple charging cable.

My conclusion on the Satechi USB-C Magnetic Charging Dock

In my everyday life it is Satechi loading dock already in use often. I use it at my desk to charge my watch for half an hour on the MacBook Pro or - more rarely - to charge the Apple Watch on my new iPad Pro with a USB-C socket while I'm watching a movie.

While I worry less when charging with the MacBook Pro, since the charging puck is almost on the desk, when using the iPad Pro I always get anxious if someone comes near the iPad. To be honest, I always worry that a stupid coincidence will put pressure on the charging dock and damage the USB-C port.

The construction is owed to the specifications of the Apple licensing, but I'm not really happy with it. The short USB-C cables from Satechi, which you can also buy, should have been included in the scope of delivery, but I can understand that the retail price was not intended to exceed the magic 50 euro mark. 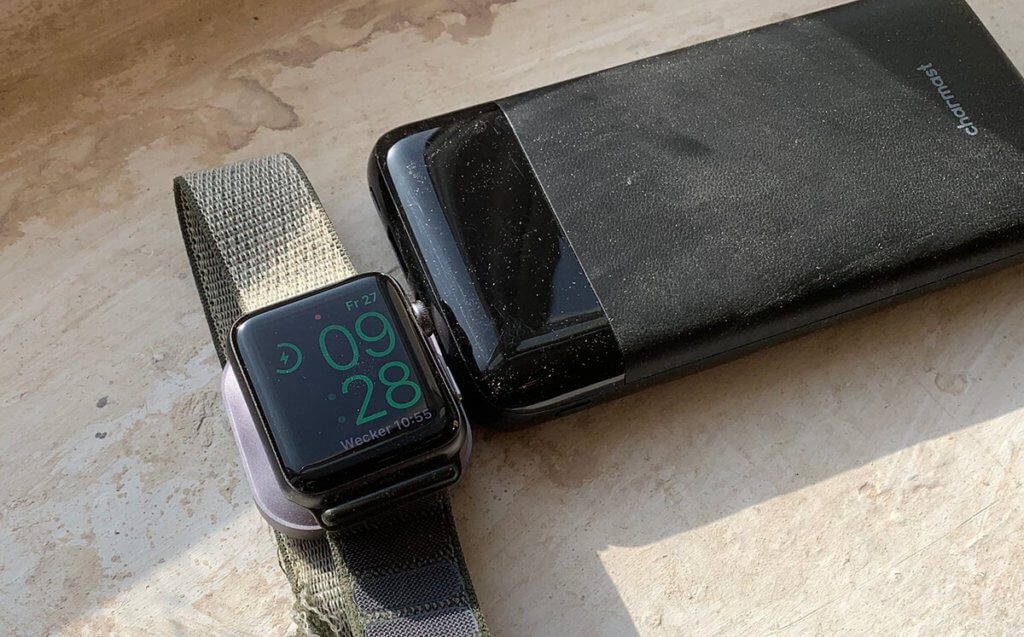 I use the charger on the go with a power bank every now and then - not the most space-saving solution, but a practical way on a construction site (forgive me for all the dust in the photo).

Otherwise, I think the dock looks and technically very good. It's a nice way to power your watch on your desk without a lot of cable clutter, and the aluminum design also makes it a great match for your MacBook Pro or iPad Pro.

Whether you want to spend 40 to 45 euros on it is certainly a matter of taste, but so far the Satechi products have always convinced me of the quality of workmanship. And since my watch is weak every now and then, I'm really happy to be able to quickly charge it again during the day. My Apple charging cable is hanging next to my bed and somehow you're too lazy to have to walk halfway through the house again to charge the smartwatch.

A possible alternative, which in the end is almost as expensive in terms of price and does not look half as good as the Satechi charger, would be the combination of the 30 cm short Apple charging cable for the watch and a USB-C adapter.

With this combination, the Apple Watch (from Series 1 to 5) can also be charged on a modern Mac with USB-C ports. I sometimes use a power bank as an energy dispenser, which is useful when all ports on the Mac are occupied again.

Cheap replicas are not very reliable

The reason I am not proposing a cheap China cable as an alternative here has to do with its reliability. There are quite a few candidates that are available at Amazon, but all of them have very mixed ratings and there are always some customers for whom the cables either load very slowly or the service completely fails.