In the test: Spigen Rugged Armor Case for the Apple Watch Series 1 to 4

Now that I've smashed the display of my Apple Watch for the second time, it's time to take protective measures. I bought Apple Care + for the watch because of my dizziness - and it was definitely worth it - but after two repairs and the imminent expiration of the Apple insurance, I wanted to create a little protection for the display with a case and bulletproof glass . The bulletproof glass is still on the way, but the Spigen Apple Watch Case is already attached to my replacement watch. For this reason I wanted to give you my impressions of this case here.

The Rugged Armor Case from Spigen protects the Apple Watch (here the pack for Series 1 to 3) from all sides - the display can only be damaged from the front (photos: Sir Apfelot).

Regardless of whether you have an old Apple Watch (Series 1 to 3) with 38 or 42 mm or a current model (Series 4) with 40 or 44 mm: Spigen offers a suitable "Rugged Armor Case" for all versions. I chose this case because it has a lot of good reviews that also look real. There were quite a few other non-name cases that also had 5-star ratings, but they worked for me very much like fake reviews, who dealers have exchanged for cases for the Apple Watch. Spigen is a well-known name in the case market and gets enough reviews - I had no concerns that something would be played to me.

Here you can see the Apple Watch case without the watch. The Caae has corresponding recesses for the microphone, crown and heart rate monitor.

Four color options to choose from

If you like it colorful, you can choose between four colors for the Rugged Armor Case:

It should be noted, however, that the color black is available for all models of the Apple Watch, while the other three colors are only available for the current Series 4 with sizes 40 and 44 mm.

The Spigen case is made of TPU and has a matte look. The optics are fine for me. The case is of course not invisible, but in relation to the protective effect it looks relatively unobtrusive. Since the corners are also slightly raised, they also offer protection for the Apple Watch display if you place them with the display facing down on surfaces that could otherwise cause scratches.

The sensitive corners and edges of the display glass are protected along their entire length by the TPU. I caught the first damage to the display when I hit the watch with the exact corner of the glass. That would definitely have been prevented by the Spigen shell.

The crown is recessed in the Spigen case, while an extra button is built into the case for the side button.

On the underside of the Spigen Apple Watch Case is a circular recess for the watch's pulse sensor.

The crown and the side button can still be operated through the case and it is even possible to remove the bracelet by pressing the appropriate "buttons" in the protective cover with your fingernail, which then pass on the pressure to the points on the watch. This unlocks the bracelet. The side button is also operated by a built-in button on the case, which is easy to see.

Mounting the case on the Apple Watch

Attaching the Spigen Rugged Armor Case is super easy. You take your Apple Watch, remove the bracelet and then press it - with the crown and side button first - into the case. Since the cover is tight, you have to press hard here, but you don't have to use force. If the watch is in the case, the guides for the bracelet look out of the case again and you can slide it in as usual until it clicks into place.

At first I was concerned that the case would have a negative effect on the wearing comfort of the Apple Watch. Plastic surfaces on the skin are not particularly pleasant in summer temperatures. However, since you only come into minimal contact with the case and the main contact surface is the glass on the back of the watch, you only notice a minor difference here. I got used to it after a few minutes.

From the side you can see the guides for the Apple Watch bracelet on the left and right. It can also be seen that the case is slightly higher than the display, so that you can lay it down on flat surfaces with the display facing down, without having to worry about scratches on the display.

Small restriction with the sports armband

However, I noticed one little thing that doesn't "fluff" as much as before after attaching the case: If you have a thick wrist and open the sports bracelet, you also have to pull part of the Velcro fastener through the deflector on the bracelet at the end . However, since the case narrows this "bend" a little, it is initially difficult to open the sports armband to the full length and then to close it again. This is simply because the bracelet is a little thicker where the Velcro is and the friction increases.

This problem only occurs with the nylon sports armband and I hope that after a few days it will "wear out" and that it will be easier to open and close. If you have thinner wrists, you probably won't have to open the bracelet until it hangs, but for me it's exactly on the limit. In the meantime, however, I have the right technology to learn how I can easily put the watch on and take off again.

This is how the Spigen case with my Apple Watch Series 3 looks from the side when it is worn on the wrist.

The Spigen Rugged Armor case in live operation on the wrist. The slightly oily streaks on the left side of the case come from my sunscreen and have now disappeared again.

I don't think the protection of the Rugged Armor Case is bad. However, since I have already managed to damage the display by hitting the clock head-on against a stone wall while working in the garden, one has to admit that not all "attacks" can be successfully fended off by the case. For that reason I'll be back shortly this bulletproof glass try out. That should be less noticeable than the case and offer more protection for the display glass.

However, if you want all-round protection for your watch, the Spigen Rugged Armor Case is a good choice. The TPU case for the Apple Watch should do a good job here without restricting the operation of the watch.

One more note: The Spigen case only makes the Apple Watch slightly heavier. For me, the watch is still charged while hanging on the Apple Watch charging cable from Apple and the magnet also manages to hold the weight of the watch, bracelet and case.

Variants and source of supply

If you want to see or buy the Rugged Armor Case from Spigen, you will find it here is the link to the different models and colors. Please make sure that you buy the right case for your watch series and the appropriate size.

I'll link you here to the model that I had in the test (Black for the Apple Watch Series 3 with 42 mm): 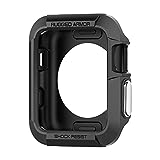