In the test: Spin Master Perplexus - a nerdy ball maze for children and adults

I am glad that a long time ago I added the section "Nerd stuff“Introduced. This way I can also accommodate a few things that do not fall directly into the topic of computers, but still cause so much enthusiasm in me that I want to mention them with a blog post. One of those things is definitely the ball maze Spin Master Perplexus.

The Spin Master Perplexus Original ball labyrinth is one of the Perplexus variants that can be classified as medium difficulty (Photos: Sir Apfelot).

If you don't know exactly what a ball maze is, imagine these little advertising media games in which you have to bring a small metal ball through a maze to a target. Sometimes there are obstacles such as holes or the like to overcome. And if you really drill these little games, make them really difficult and build tracks that run not only on a two-dimensional plane but even three-dimensionally, then you have an approximate idea of ​​the Spin Master ball labyrinth.

The labyrinth is located in a transparent plastic ball so that you can always see where the small metal ball is running.

Different versions and levels of difficulty

If you look at Spin Master's website or in Amazon, you will find different models of the perplexus ball maze (the individual Amazon product pages are linked here, where you can take a closer look at the balls):

Personally, I only bought the “Perplexus Original”, but I've already watched a few videos of the other models. The "Rookie" model is no longer available if you already have the "Original", because Rookie is even easier and probably only has enough difficulties to offer for children aged 5 to 8.

I think the "Perplexus Original" model is the best entry-level model. You might get through the rookie too quickly and then he'll be in the corner.

The "Perplexus Star Wars Death Star" model is certainly one of the best models for Star Wars fans, because it even has light and sound effects, but it is also significantly more expensive than the other versions - probably also because of the license fees.

The "Perplexus Wasp "has a slider with which you have to slide the ball over a few stretches while keeping your balance and the twist has rotating wheels at the top and bottom that allow you to turn larger parts of the inside of the ball.

The "Perplexus Epic"After all, it is the model for people with a high tolerance for frustration. I have read that sometimes you would feel formally punished if you failed somewhere in one of the 125 obstacles. It is therefore advisable to start with a different model first. before you do the "Epic". The "Star Wars Death Star" model would be of a similar level of difficulty, but not nearly as "nasty." I think there will be another post soon in which I will explain the individual models in detail I have already ordered the Epic. ;-)

The "Perplexus Original" also has moving parts, such as the bucket on the right. Roll the ball into the bucket over the track in the picture on the left and the bucket then swivels to another place where you can continue.

Design and processing of the Spin Master Perplexus

A few days ago my wife said: "This thing looks like a toy from the crawling group!". Personally, I think it looks appealing like a Rubik's Cube or something similar. Sure, it's not the design element that you want to put in your stylish living room, but it looks so interesting that almost everyone who sees it (my wife excluded) wants to take it in their hand.

There is little to complain about the workmanship. It consists of 99% plastic, but is not "rickety". I think it would survive a fall from the table a couple of times, but when the transparent hemispheres are scratched, you can see less of the inner workings. So you should be careful with the ball.

For the wobbly plastic stand, I wouldn't give the Perplexus a great rating, but everything else is just right.

My age recommendation: from 8 to 99 years

I bought the Spin Master Perplexus Ball Maze for my kids, but of course I was curious about it when I first saw it. I like such little games of skill and I was sure when I bought it: If no one else likes it - I do!

The difficulty with the game is to turn the Spin Master Perplexus so that the little ball inside stays on the path and rolls around certain obstacles without falling off. This assumes that one is constantly aware of the direction in which gravity is currently acting on the ball, because this ultimately drives it through the labyrinth.

If you put the perplexus in the hand of children, you will quickly notice that it is not only adults who have skilled and gross motor skills. But don't worry: everyone has their strengths somewhere ... if you don't master perplexus, you are far from being untalented.

When watching some of the children who came to visit, I was very surprised at how big the differences are in understanding the effects of gravity - even though the children even go to the same class. Some of them understood very quickly how the thing works and managed the obstacles from 1 to 30 (out of 100) relatively quickly and others first had to understand how to hold the perplexus so that the small steel ball was moved by gravity and the slope of the path rolling in a certain direction.

In any case, this toy promotes hand-eye coordination and trains three-dimensional imagination, because you definitely need both when the track suddenly bends vertically upwards and then makes a turn so that the ball moves on the underside of the track, on the you were previously on the top.

In some places the ball is diverted in such a way that you have to turn the labyrinth completely in order to continue playing overhead.

Regarding the age range, I would say that you can start with normal perplexus when you are seven to eight years old. The "Rookie" model should be solvable for 5 to 6 year olds. If you hand the "Epic" into a child's hand, it must be very good at dealing with defeat and be happy to bite into problems so that it doesn't get frustrated.

On the other hand, it is precisely these little "defeats" that teach you to deal with setbacks for life. And you don't always have to start at 0 with perplexus, you can also jump in directly at obstacle 30 or 60. In life, unfortunately, you sometimes have to start all over again, but that's another story. ;-)

Despite its bright colors, the Perplexus is definitely not just for children. Even as an adult, I have a lot of fun with the ball maze and am happy every time I have mastered a difficult point that just didn't work out in the previous ten attempts. It often helps to take a close look at the spot and think about which movement you have to make with the perplexus ball so that the small metal ball follows the safest possible path. And trying things out is by no means stressful. Every now and then, I used it to distract myself from work for five minutes or spend a few minutes in the evening when I just didn't feel like doing anything.

The difficulty: appropriate, but not mean

If you're wondering how far I've come with perplexus: I had a run on the sofa with my kids earlier and made it all up to obstacle 98 for the first time. Since the "Perplexus Original" only has 100 obstacles, the Epic will soon land here on the sofa table (already ordered!). ;-)

Sometimes it is quite literally a ride on the razor blade when you lead the ball through the maze.

I think the first 30 obstacles are actually no problems for beginners. Then the level of difficulty gradually increases, which should be so, so that you have to "nibble" something. There are a few places where I gave up after 10 minutes to get down again, but they also worked at some point. So you never really get frustrated and you have little success stories.

I think you should still be the puzzle type to have fun with the Spin Master Perplexus, but then it's really a nice pastime that keeps motivation high as there are no really nasty parts.

The obstacles in the Perplexus Original are beautifully made and demand spatial imagination.

The Spin Master is of course clearly designed for children. For real men, one would have long since had a titanium version with neodymium magnets and Flux tubes tinkered. But apart from the design, the "Spin Master Perplexus Original" is definitely also suitable as an adult toy. That sounded wrong now, didn't it?!? You know what I mean… 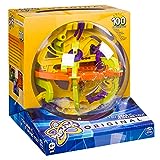 Due to the price of approx. 20 EUR, the toy is also perfect for children's birthdays or similar occasions. And if you are looking for an original gift idea for your geeky or nerdy work colleague, you are on the safe side with this thing. Depending on the nerd level of the colleague, you may go straight to the "Perplexus Epic" to grab. 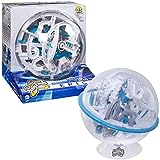 If you are looking for a cheaper option for children, you can go to the "Spin Master Perplexus Rookie" look at: 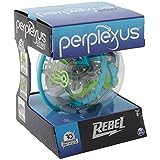