I already had a review in 2015 Bluetooth headphones from TaoTronics. Back then it was them TT-BH07which not only I liked, but also received a lot of positive feedback from readers. A few days ago a TrueWireless model from TaoTronics came onto my desk with the name SoundLiberty 79 (TT-BH079) listens and also wants to be tested.

TaoTronics made the product available to me free of charge, but of course I take the test neutrally and try to give you an objective picture of the in-ear Bluetooth headphones. 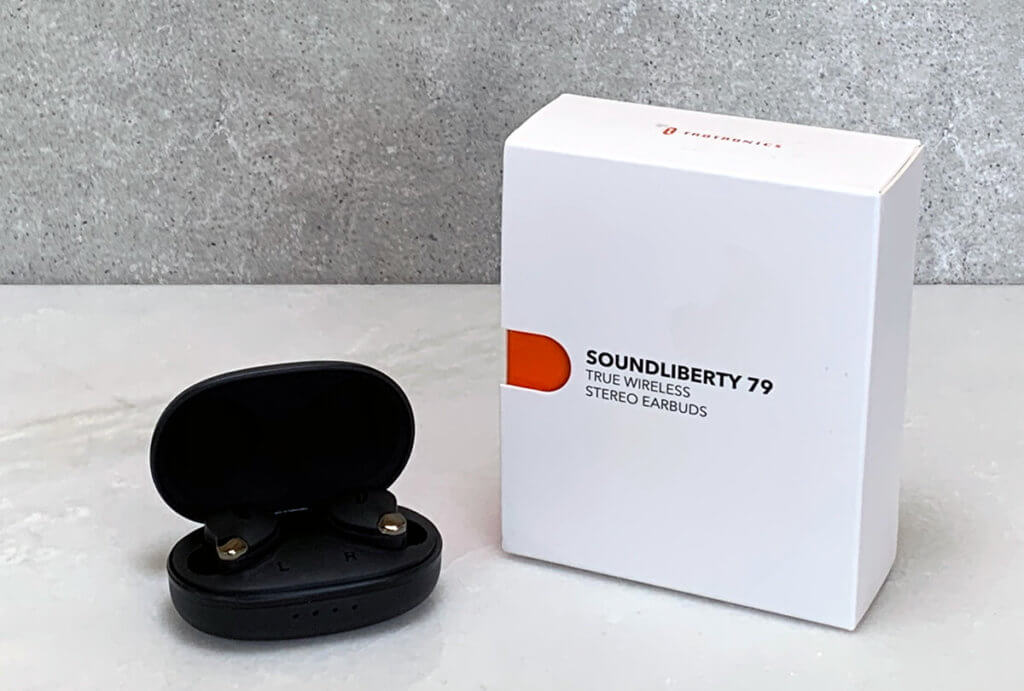 The SoundLiberty 79 from TaoTronics are Bluetooth headphones that manage completely without cables (Photos: Sir Apfelot).

Technical data of the TT-BH079

To give a brief overview of the technical details of the SoundLiberty 79 from TaoTronics, I have put together everything that I could find in the operating instructions and the website of TaoTronics:

The scope of delivery includes: 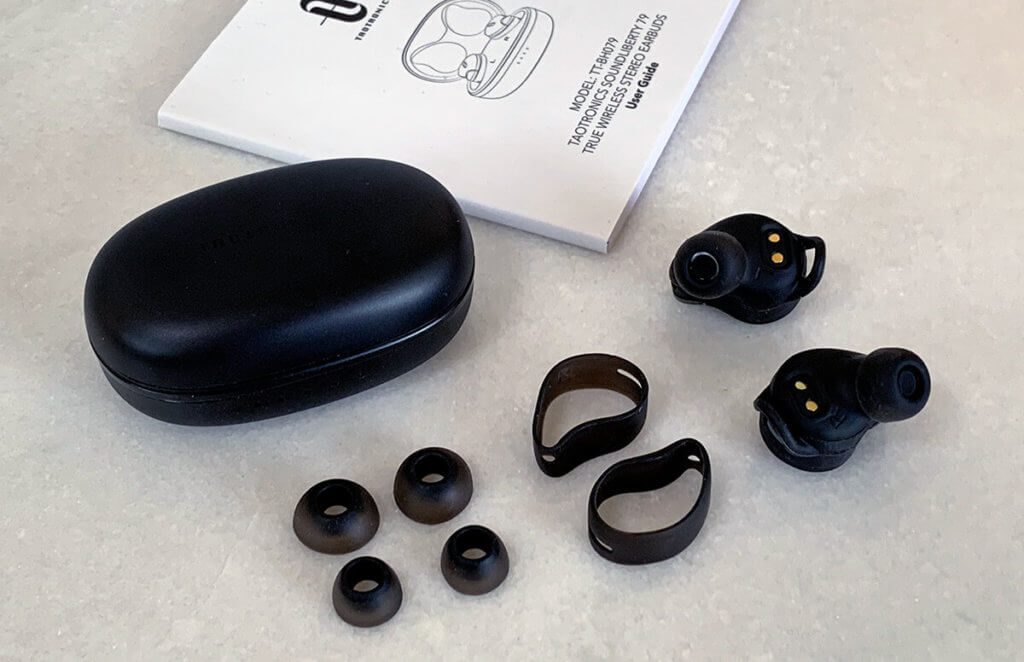 Sufficient material is included in the scope of delivery of the SoundLiberty 79 to adapt the headphones to your own ears.

The earphones are dark gray and have a small, metallic-looking part that sets a slight accent. The design of the TT-BH079 is very compact and the fit in the ears was immediately quite good. I usually have to try around a bit with in-ear headphones until they fit, but the SoundLiberty 79 did quite well.

If they don't sit properly, the pack contains some ear pads and two rubber sleeves with which you can adjust the headphones to your own ears.

The charging case is easy on the hand and has only one USB-C port for charging and a battery indicator with four white LEDs. You will look in vain for a button for pairing or the like - since it is not necessary. 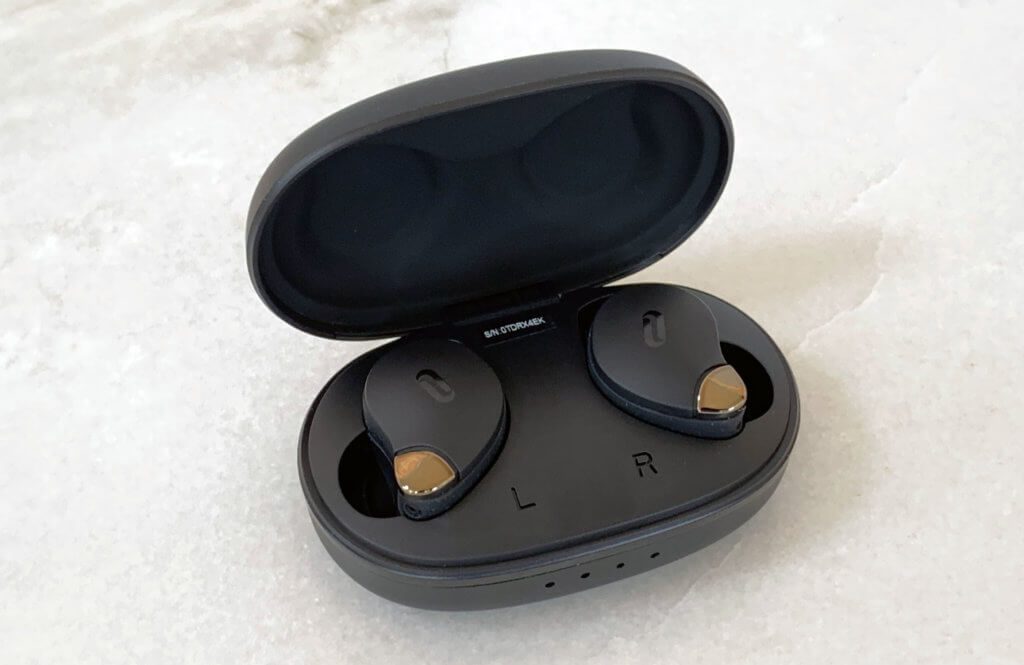 The earphones are charged via the charging cradle. However, the case does not offer a power bank function for smartphone emergency charging.

There are people who find the lid of the charging box too rickety. I cannot understand this. You can tell that it is not made of 3 millimeter thick plastic, but it fits perfectly and does not give the impression that it will fall apart after a short period of use. The construction is presumably weight-optimized, but quite durable and by no means "rickety".

Overall, the overall package of earphones and charging case makes a good impression and seems to be neatly processed. So far I have not experienced or expected anything else with products from TaoTronics.

Pairing and storing the earbuds

Getting started with the SoundLiberty 79 is very easy: you open the charging box, remove the two earphones and they are switched on and in pairing mode. You can then find them via the Bluetooth settings in the iPhone, iPad or Mac and connect to them directly.

If you put it back in the case and close it, the earbuds switch off automatically and the connection is terminated. Otherwise, they switch off if they no longer receive a signal from a device for more than 10 minutes.

The TaoTronics headphones do not offer "out of the ear" detection like the AirPods have. With the AirPods, the playback of video or audio material pauses immediately as soon as you remove an earpiece from your ear. If you plug it in again within a short time, playback will automatically resume. This feature would have been nice with the TaoTronics In-Ears, but unfortunately it is not available at the price and is not a matter of course. 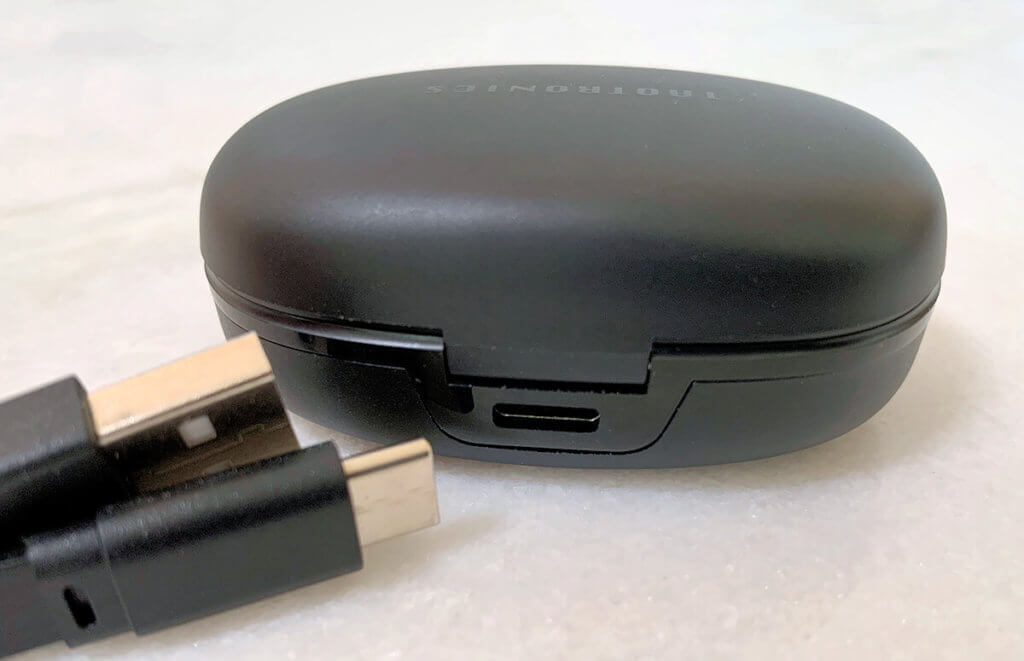 Positive: The charging cradle is charged via a USB-C connector. I think it's good that this connection continues to prevail.

The TaoTronics SoundLiberty 79 is operated via a touch surface that is located on each earphone. A number of "commands" can be transmitted via this, which I would like to list briefly here:

Since the TaoTronics TT-BH079 also work as a headset, you can also handle calls with the following commands: 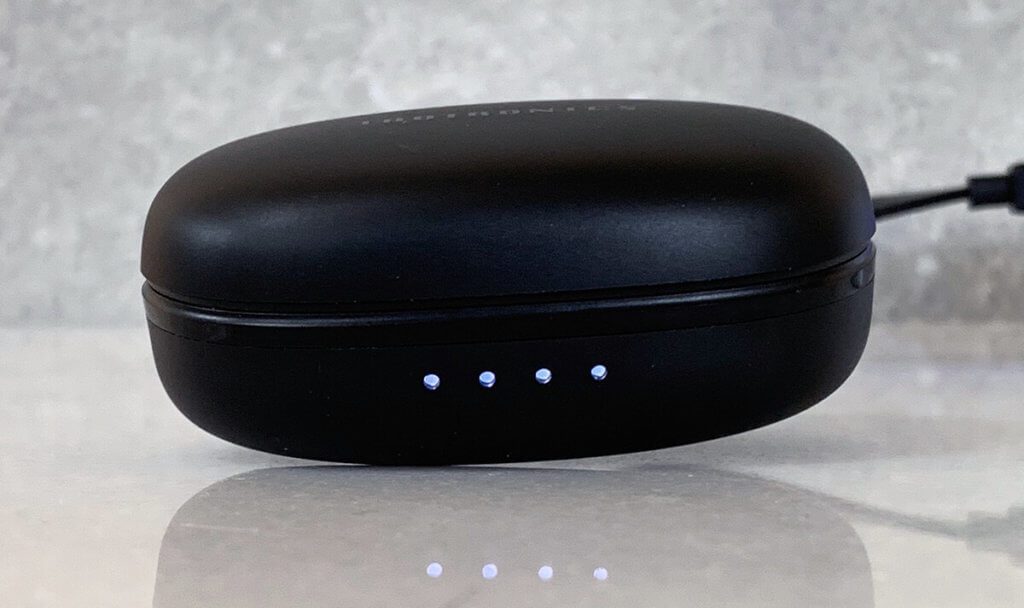 It is a little trickier if you want to reset the TT-BH079 True Wireless headphones in order to restore the state at delivery. This can also be used to unpair a device and start over:

Once that's done, put both earplugs back in the box and close them for 5 seconds. Now you can remove the earphones again and they should be in pairing mode. 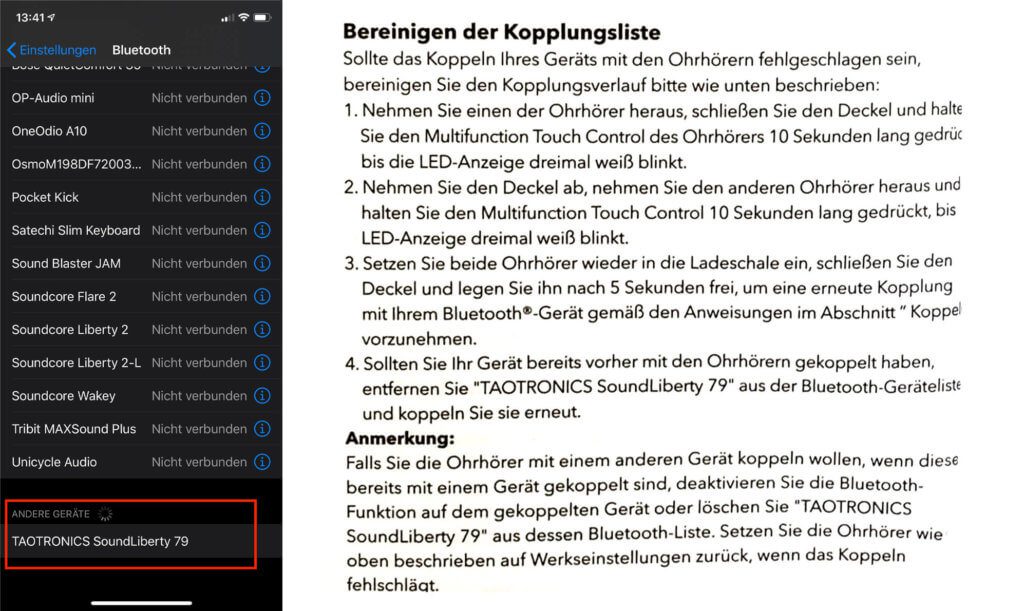 Pairing reset is a lot more complicated than most other headphones, but pairing it for the first time is very easy.

Sound quality of the TT-BH079

As you already know from previous tests, I am not that super-audiophile user who can describe the sound of headphones with a hundred adjectives. My hearing is probably not "fine" enough for that. But I would see myself as the average user and I hope that I can adequately address the sound of the TaoTronics SoundLiberty 79 with my not very comprehensive description.

Overall, the true wireless headphones sound pleasantly round and balanced. Sure there are models with more bass (like the Bose SoundSport Free), but it is by no means the case that I am actually missing the bass. The highs do not stand out either, which I already noticed when testing other headphones and which really gives me an earache.

The sound quality is good and, surprisingly, classical music - which I only try out with headphones like this as a test - sounds relatively good. I think that may be because the low frequencies of the TaoTronics in-ear headphones are not so excessive and all frequency ranges are well represented. 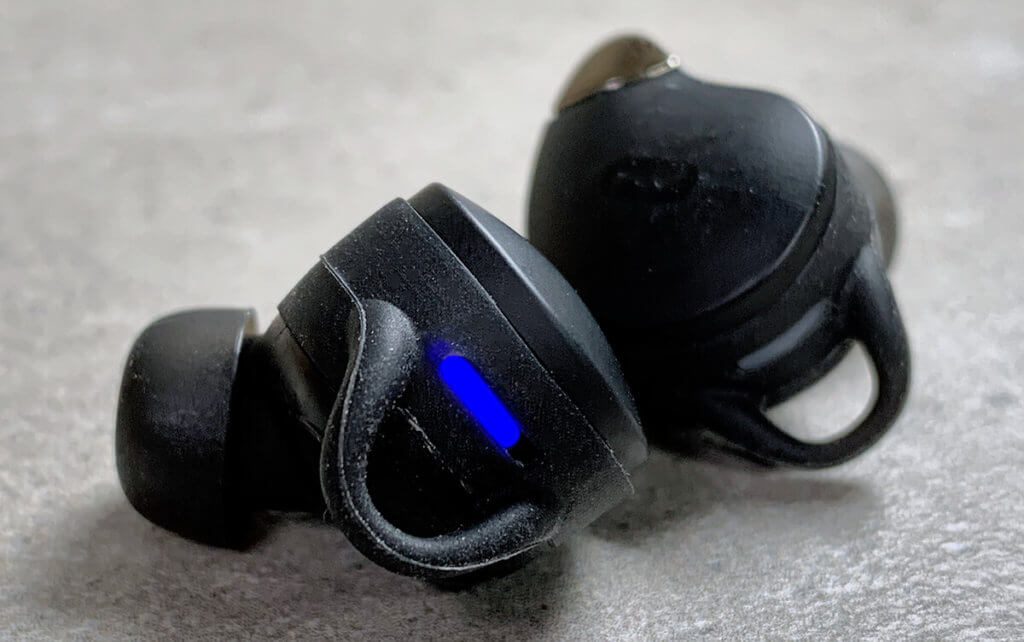 There is also an LED on each earbud, which, however, only rarely lights up during normal operation. It mainly signals the pairing mode and readiness for operation after removing it from the charging case.

If you want to use True Wireless headphones for sports, the most important thing is resistance to sweat, a secure fit in the ears and reliable operation.

When it comes to the fit, you are always very dependent on your own ears, but you can adjust a lot with the different silicone plugs. The headphones held up pretty well for me and did not fall out of the headbang test or pseudo-yoga. I think TaoTronics has provided enough material here to optimize the "adhesion" in the ears.

Only earphones that are equipped with a bracket and can thus be "clamped" to the ear should perform even better here - but they are also significantly larger in terms of dimensions.

When operating devices via touch-sensitive areas, I am always very skeptical. Far too often these lead to incorrect entries or no longer work under certain circumstances.

Unfortunately, this is also the case with the TaoTronics SoundLiberty 79, because the operation is unreliable with wet fingers - or in other words: it does NOT work reliably.

With headphones that are labeled as sports headphones by the manufacturer, I would have expected that the controls would do their job perfectly even with sweaty fingers. 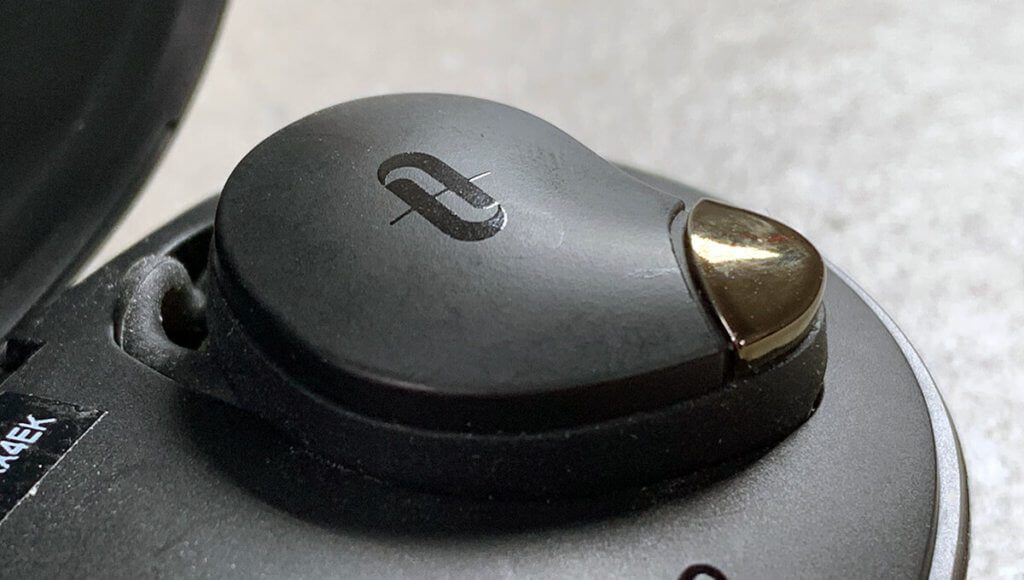 The touch-sensitive surface looks good, but unfortunately does not work if it gets wet or you want to operate it with damp fingers.

The TT-BH079 are another example in the long list of devices that show that a simple, real button is sometimes a thousand times better than a chic touch operation. I advocate that manufacturers use more real buttons that have not only worked reliably for ages, but also give haptic feedback when they are triggered.

TaoTronics advertises on the Product page at Amazon.de clearly with the term "waterproof", but the IPX7 certification - which is also mentioned there - actually only means that they are protected against dust and strong water jets.

On Taotronics homepage itself on the other hand, one finds the specification of protection class IPX8, which means that the device is "permanently protected against immersion in water". That would be more like the adjective "watertight". 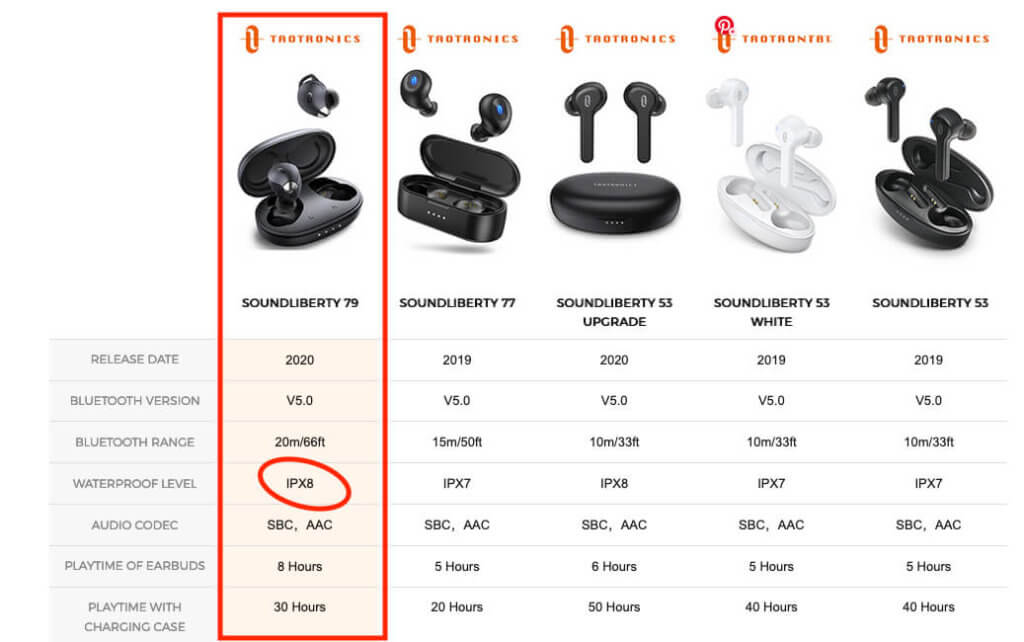 According to TaoTronics, the SoundLiberty 79 are even secured with protection class IPX8.

For a test, I simply immersed it in a beaker of water for 30 minutes and then saw what happened. The result: while the left earbud was working again, the right earbud did not react. I then dried them both in the sun for a few more minutes and put them in the case, since you can only turn them off by placing them in the case. After removal, both earplugs ran as usual. 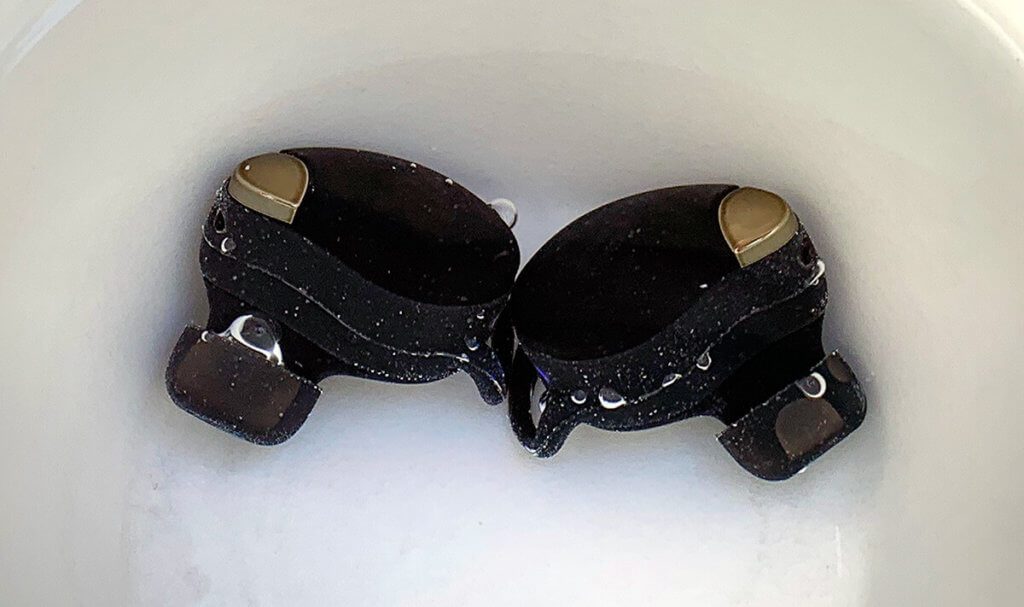 30 minutes in the water did not cause permanent damage to the SoundLiberty 79. Inserting it into the battery case solved the problem with switching on (photos: Sir Apfelot).

Of course, sweating as a stress cannot be compared with immersion in water for 30 minutes, but with the statement "waterproof" I also expect that you can actually withstand more than one shower of rain.

Despite the good test results in the water test, I would only recommend the headphones to a limited extent for sporting activities due to the operating problems with wet fingers - there are better models like these Anker Soundcore Liberty Neo or - if it can be a little more expensive - the Bose SoundSport Free. 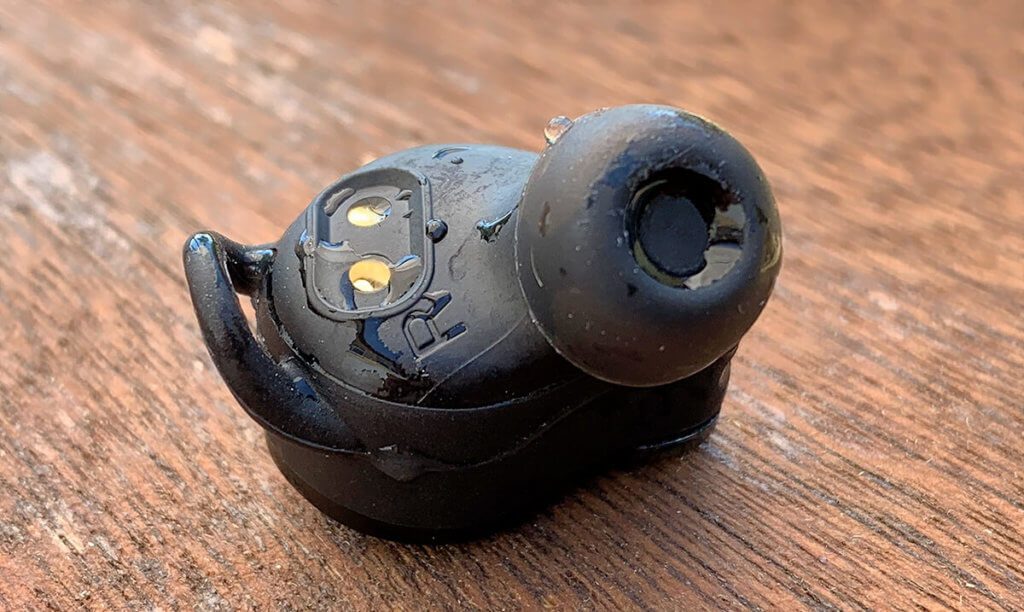 The SoundLiberty 79 doesn't mind water, but the problem is that once your fingers are wet you can't operate it.

No app, no sound settings, no multipoint

To check off a few things that might come up as questions:

I don't think these features are that important, but I wanted to note them in case anyone is interested. 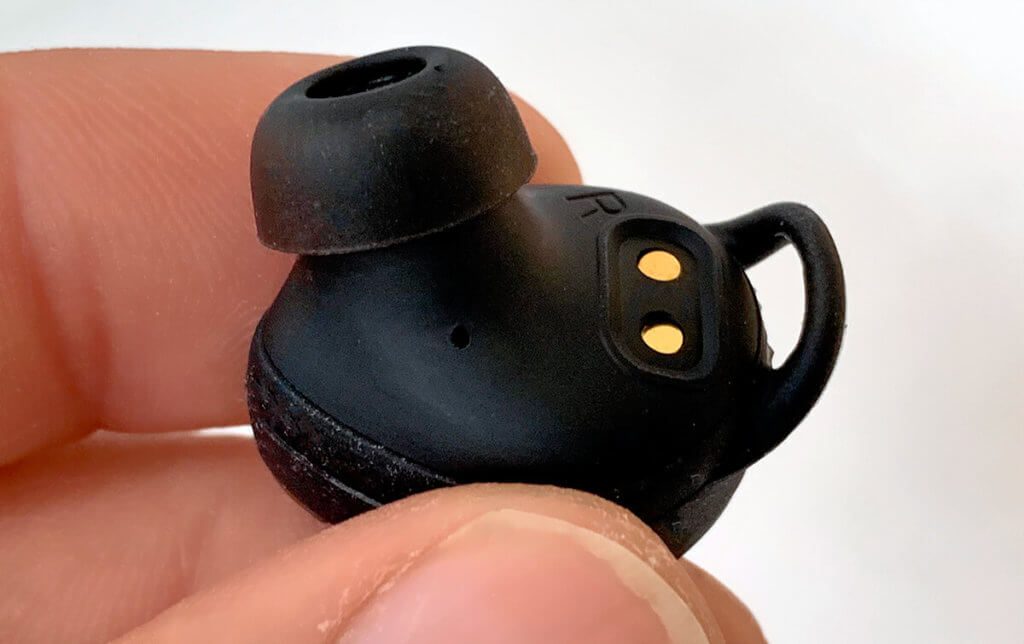 The TaoTronics TT-BH079 are definitely a solid choice in terms of sound, optics and operation, if you are not necessarily looking for sports headphones.

My conclusion on the TaoTronics SoundLiberty 79

The TT-BH079 are definitely not a bad choice if you're looking for a good pair of true wireless in-ear headphones. The sound is good, they look nice and the operation is also kept intuitive and simple, but offers many possibilities.

The only thing I wouldn't recommend them as sports headphones. They are waterproof (IPX8) and sit well in the ears when you move, but the fact that they cannot be operated with wet fingers speaks against it in my opinion.

If you want to use it as a headset for your phone, you benefit from the good noise suppression, which improves phone calls in noisy environments. But they are also a bargain as “normal” true wireless headphones, as they can be had for less than 50 EUR.

If you want to see it, you will find it here at Amazon or via this product box: