I recently wondered if there weren't any power banks that could be filled with rechargeable, replaceable batteries. The research was done quickly, because the selection of such battery packs for smartphones and co. Is relatively limited. I have the power bank "tizi PowerSnack" from equinux found and ordered me for a test right away. There are two AA size batteries (also called Mignon or R6) in this power bank. 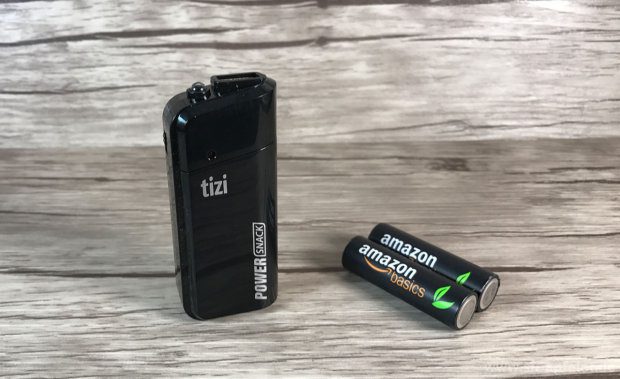 You can quickly tick these two points with "positive", because the small box can be easily opened and refueled with batteries (this is what the description says) or with rechargeable batteries (that's what I intended). Then you slide the cover back on and you can choose between LED light, Off and USB output using a slide switch on the side. A small red light-emitting diode then shows on one side whether power is currently being supplied via the USB port or not. 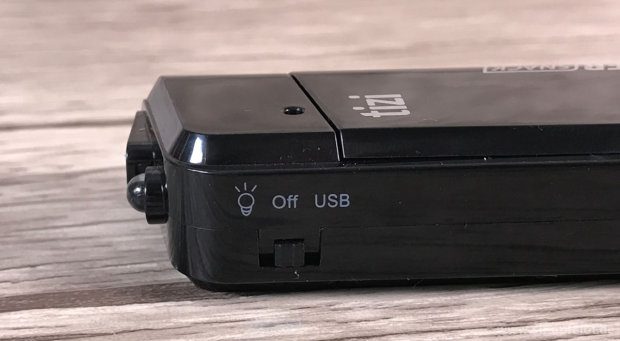 With the slide switch you can choose between the operating modes. 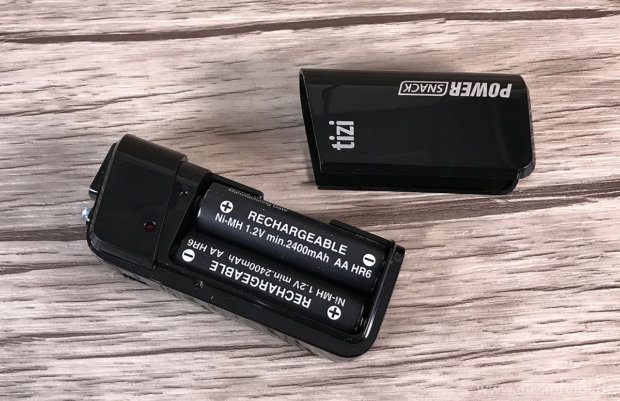 According to the manufacturer, Mignon batteries should be used in the tizi Powersnack. I tried AA batteries and the iPhone charging function accepted it anyway.

The technical side has to be seen in a differentiated way. If you operate the tizi PowerSnack with batteries, you naturally have a higher output voltage and the LED lights up correspondingly brighter. If the device is operated with two AA rechargeable batteries, the LED is so fuzzy that even in a dark room it looks like an LED about to die out.

For charging, however, the tizi PowerSnack can also be operated with rechargeable batteries. I have the black Amazon Basic NiMH cells which have a little less capacity than the silver version. Accordingly, it may be that you can accelerate the charging process with single-use batteries. But single-use batteries are just out of the question for me. 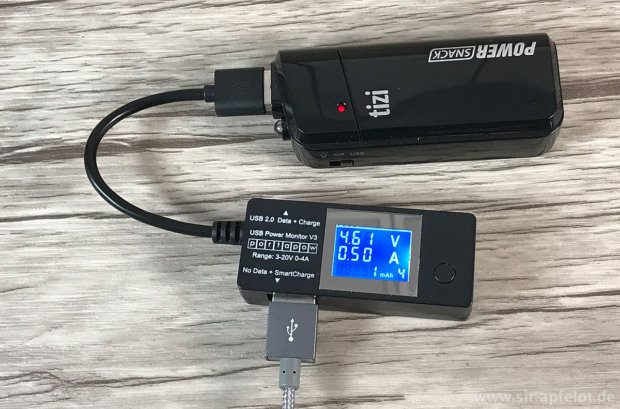 My iPhone 500 Plus charges with a good 7 mA on the Tizi PowerSnack - not a lot, but at least it charges! But you can already see that the batteries do not deliver the expected voltage, because the PowerSnack only manages 4,6 volts.

But as I said: the charging on my iPhone 7 Plus worked. Equinux itself writes in the product description that approx. 15% of smartphone batteries can be refilled with the battery pack. That may well be because the inserted AA batteries have approx. 2.400 mAh, but of course they do not deliver 5 volts output voltage. The tizi PowerSnack therefore has to increase the voltage, which means correspondingly less power output (electrical power = voltage * current). Nevertheless - and I think that's very positive - my iPhone charged with 0,5 A - even if the voltage of 4,6 volts instead of the usual 5 volts is rather borderline (which is probably due to the battery operation). For comparison: On my Apple power supply unit, it usually charges with around 1 ampere and 5 volts.

Conclusion: ok for the small emergency charge in between

Overall, I would say that the small battery pack is definitely not just a gimmick. Anyone who - like me - uses a large number of AA batteries, can perhaps pack the tizi PowerSnack as an emergency power bank. It only charges the iPhone 15-20% of course, but that can be enough in some cases. The flashlight function is practically non-existent when using AA batteries (because it is too dark), but the charging function worked flawlessly for me. Overall, however, I would tend to buy a "real" power bank with an LED function. These usually have significantly more capacity and the LED function is also practical. 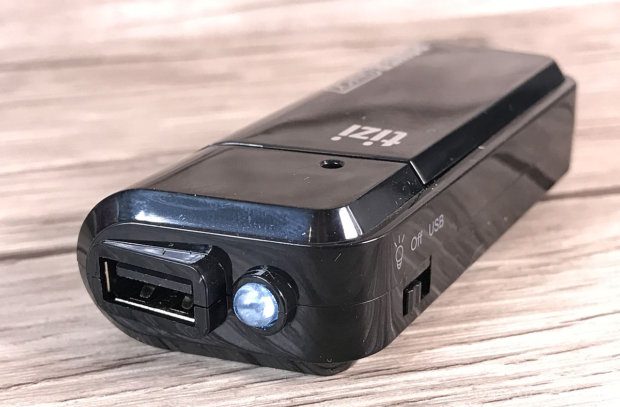 When operated with NimH batteries (not recommended by the manufacturer), the LED simply doesn't get enough voltage and works very poorly.

You can buy the Equinux tizi PowerSnack here on Amazon: 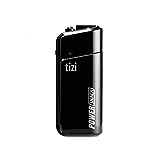 Alternatives in the same price range

If you don't necessarily want to use your AA batteries and also buy a separate power bank, you get more capacity for the same money. A cheap alternative would be, for example Anker PowerCore with 5000 mAh (but without flashlight function, but with a charging current of up to 2 amps.

If you like to combine a power bank with an LED flashlight, you can look at the model from EC Technology. In addition to a capacity of 5.200 mAh, this power bank also offers an LED that is bright enough to light your way in the dark. 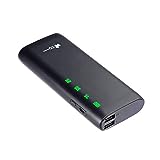 And if you like even "bigger caliber", you should get this one Aukey Power Powerbank or my article on mobile power supply look at.