In the test: Tribit MaxSound Plus 24W Bluetooth speaker

I've already put so many Bluetooth speakers under the microscope in tests that you'd actually think I'm fed up with the little roaring cubes. But the opposite is the case: I'm always curious to see how the wireless speakers sound and - once again with my children - have a lot of fun trying out the speakers.

This time it's about that Tribit MaxSound Pluswhich has already been praised by many specialist media. Now I have the opportunity to take a close look at the device myself and describe to you completely without hifi technical jargon how good the Tribit loudspeaker is.

The Tribit MaxSound Plus is a remarkably good and inexpensive Bluetooth speaker of the small variety (Photos: Sir Apfelot).

The manufacturer made the Tribit MaxSound Plus available to me free of charge. However, that is no guarantee of a positive rating, which I communicate to the manufacturers with every test offer. If there are negative points that I notice about a device, they end up unadorned in my test report.

Technical specifications of the loudspeaker

This will be the only place where there will be some technical jargon to be read after all:

The MaxSound Plus from Tribit comes in pill form and has an amazingly good sound. But the workmanship also looks very high quality.

If you read through the specifications, you can see that the pill-shaped loudspeaker weighs almost 20 grams with a width of only 600 cm. The housing is made of very robust and heavy plastic, with the driver on the front being covered with a black grille.

The design of the Tribit is simple but appealing and fits into every apartment.

On the back you can see an air outlet, which was also designed like a grid. This is noticeable when you place the box close to a wall.

The slits on the back help highlight the deep tones.

Surely there are more colorful speakers like that Anker SoundCore Flore 2, The JBL Pulse 3 or EasyAcc F10  (here in the test). But not everyone likes lighting effects and LED color changes, so the Tribit MaxSound Plus appeals to people who prefer a simple, elegant design.

The control panel of the Tribit is well sealed and has real buttons that give you feedback - not badly functioning touch frills. Very good!

The Bluetooth box is operated via a field on the top. There are six buttons attached, which are only noticeable by a raised surface. Since there are no edges or the like, the construction looks very well protected from the ingress of water or dust.

On the back there is a solid rubber flap behind which there is a micro USB charging port and a 3,5 mm jack input. I would have preferred a USB-C port, but apparently we're not there yet. : D

The rubber flap on the back is protected with two rubber lips to effectively prevent water from entering.

For safe transport, a carrying loop was placed on one side of the box, with which you can easily hang the loudspeaker in the shower or on a branch in the garden.

The pairing takes place - as usual with Bluetooth audio devices - with a long press on the Bluetooth button. After a few seconds a tone sounds and the LED flashes blue. This signals that the Tribit loudspeaker is in paring mode.

Now call up the Settings> Bluetooth menu in the iPhone and look for the entry "Tribit MaxSound Plus" under "Other devices". If you select this, the iPhone is paired with the speaker.

Pairing the Tribit Bluetooth box is simple - as usual.

Another plus point, in addition to the simple pairing, is the volume control, which is synchronized with the paired iPhone or iPad. This means that when I control the volume on the box, the volume bar is displayed on the iOS device and changes accordingly.

The point that you read again and again in reviews of the Tribit MaxSound Plus is that the sound is very good and round. I can actually confirm this. In terms of size, it is roughly the same as my Bose Soundlink Mini, which, however, costs almost four times the Tribit.

The Tribit loudspeaker also performed well in the underwater test. By the way, on the left you can see my Soundlink Mini from Bose - but it wasn't allowed to go swimming.

To compare Bluetooth speakers, I usually like to use models that are similar in size and price. It is otherwise a little unfair to compare a 200 EUR box with a speaker that costs only 50 EUR - of course, completely different components can be installed here, which also affect the sound.

However, the Tribit MaxSound Plus does not have to shy away from comparison with significantly more expensive speakers. If you switch on the XBass (a bass amplification function), the sound is quite on the level of my Bose box. Without XBass, I would rate the sound as a bit "flat". Hi-fi people would rather speak of a uniform frequency spectrum.

I had that a while ago Riva Turbo X in the testthat sounds similarly neutral and where the manufacturer says he wants to play the music exactly as it was mixed by the artist. My preference for a little more bass (like with the HomePod also) is not for everyone.

In addition to the function of a loudspeaker, the Tribit-Box can of course also be used as a hands-free device for making calls. All features here in small symbols.

XBass: Bass booster at the push of a button

The XBass function is usually switched on for me, as it makes the sound significantly more room-filling and warmer. The bass is amplified but not obtrusive.

The function is particularly advantageous if you want to listen to your music quietly, but still don't want to do without a voluminous sound.

You can switch off the XBass, for example, when listening to audio books or podcasts where the speaker already has a bass-heavy voice. Then the intelligibility may be better if you deactivate XBass.

Waterproof - tested by yourself!

With IPX-7 protection class the loudspeaker is rated as "waterproof" and should survive brief submersion down to a depth of 1 meter. You should of course close the rubber flap on the back before you sink it, but that should be clear.

Since we didn't have any bathing lake weather, the test had to take place in a salad bowl with water. My son and I enjoyed that no less, because if you submerge the device and turn it on, you get a small, vertical shower that hits you completely unprepared the first time.

By the way: My son found the sound of the Tribit MaxSound Plus even better compared to the Bose Soundlink Mini.

My son and I dipped the Tribit completely under water and turned it on too. You can even recognize the song underwater.

In contrast to the EasyAcc F10, which briefly sounded strangely dull after submerging, the Tribit MaxSound Plus gets rid of the water immediately after surfacing and sounds like it did before the bathing action.

We really tortured the speaker extensively underwater, but we still don't see a problem even weeks after testing. I think you can see the IPX 7 protection as confirmed.

The housing of the Tribit loudspeaker is very robust and the drivers are protected from damage by a solid metal grille.

My conclusion on the Tribit MaxSound Plus

If I had to recommend a cheap Bluetooth speaker with a very good sound and without a lot of optical frills, then the choice would definitely fall on the Tribit MaxSound Plus.

So far, I haven't had a loudspeaker in the test that has delivered such a stunning sound with such small dimensions. The fact that he even manages to put him in the same group as my Bose SoundLink Mini shows how much I think of the device.

If you are interested in the device, you will find it here at Amazon or via the following product box: 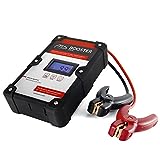 M + S battery-free jump starter 400A, battery booster with ultra capacitors for over 10.000 ...
Buy it at Amazon Price includes VAT, plus shipping costs (updated: 25.11.2021 at 03: 50 clock)
-
Do you like my blog? Then I would be happy to receive a short review on Google. Easy leave something here for a moment - that would be great, thank you!