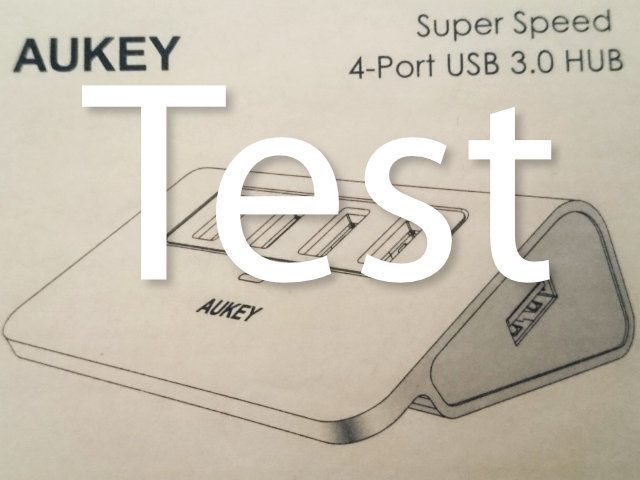 In this short test report I would like to show you how recommendable the AUKEY CB-H5 USB hub is. I will also show whether the additional four USB-A ports with USB 3.0 technology are also suitable for charging USB devices such as headphones, speakers, iPhone, iPad, Android smartphone and Co. Small spoiler: I think the junction box for the universal plug is really good - and the design also goes well with the Apple Mac / iMac / MacBook;)

Minimalist desk or tangled cables: the 4-port USB 3.0 hub from AUKEY is not only ready to use, but is also nice to look at.

I have been using the hub with USB-A 3.0 port for connection to the Apple Mac, MacBook, Windows PC, laptop or Linux computer for a few weeks now. I used it on an Apple MacBook Pro (Mid 2012) and on a Windows notebook from Lenovo. At both of them I mainly did standard things with them: connected the keyboard and mouse, connected the printer or scanner and also charged mobile devices.

In the test with a USB multimeter and load resistor, the USB outputs reached values ​​that can be described as good - these maximum values ​​were measured both when used individually and when using multiple connections (keyboard, mouse and multimeter / resistor) before the load resistor began to switch off to be on the safe side:

If you ask for 2,4 A to quickly charge devices, the voltage drops. The average is 10 watts.

The load resistor with its own display accompanies the measurements with the USB multimeter. If you turn higher, it shows the limits of the stroke.

The AUKEY CB-H5 USB hub performed well or very well in the test. Whether on a minimalist desk or a display counter for tangled cables - the distributor looks good. If you want to get more details, reviews, questions and answers from other users as well as the possibility to buy, then I recommend Amazon: