Today I am at SetApp stumbled across an exciting tool that could have helped me many times if only I had known: TextSoap from unmarked software. To put it simply, TextSoap is a text editor that offers a rich arsenal of functions that can be used to clean up texts. And the cleaning itself can be designed freely or you can put together your desired "cleaning procedure" from existing routines. Would you like a few simple application examples? Here you are: 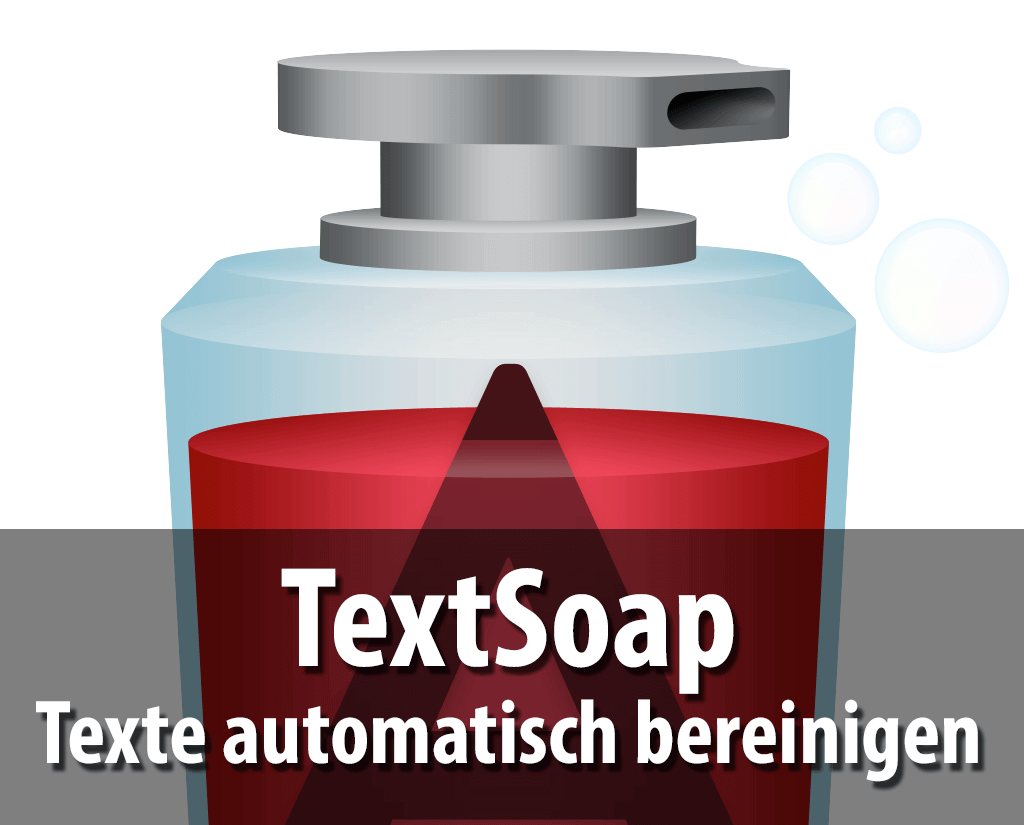 With TextSoap, any text can be searched and corrected automatically for many typographical and formal elements at the same time.

My previous solution: Search and replace via PHP script or in Pages

As you can see, if you often work with other people's texts, you get a lot of possible problems that you have to solve. You shouldn't actually tell it at all, but I had programmed a PHP script for this from time to time, which solved several tasks at the same time for me using search and replace. This is of course really cumbersome and really only worthwhile if you have a lot of texts that you then clean up by copying and pasting. But it is at least time-saving than in Word or Pages using the "Search and Replace" function to gradually resolve the problem cases. 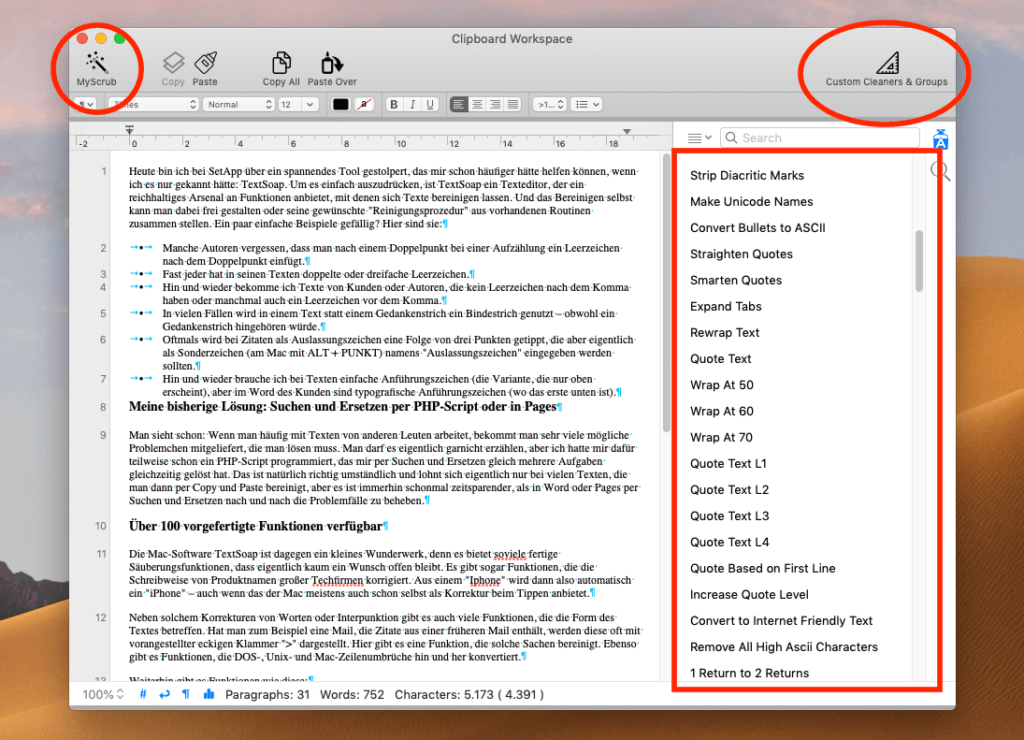 The editor window of TextSoap has various areas: the button at the top right opens the editor with which you can put together your own text cleaning functions; In the box on the right you can find an excerpt of the existing routines (the scroll bar shows how many options there are) and at the top left is the button with which you can start your personal favorites cleaning routine.

If you move the mouse pointer over a function, a small hint appears that explains what the function does exactly.

The Mac software TextSoap, on the other hand, is a small marvel for this area of ​​application, because it offers so many ready-made cleaning functions that hardly anything is left to be desired. There are even features that correct the spelling of product names from big tech companies. An "Iphone" then automatically becomes an "iPhone" - even if the Mac itself usually offers this as a correction when typing.

In addition to such corrections of words or punctuation, there are also many functions that affect the form of the text. For example, if you have a mail that contains quotations from an earlier mail, these are often shown with a preceding square bracket ">". There is also a function for this in TextSoap that cleans up such things. There are also functions that convert between DOS, Unix and Mac line breaks back and forth.

In order to briefly introduce a few more routines, I have put together a small list here, but it does not cover all the possibilities by far. You can, among other things: 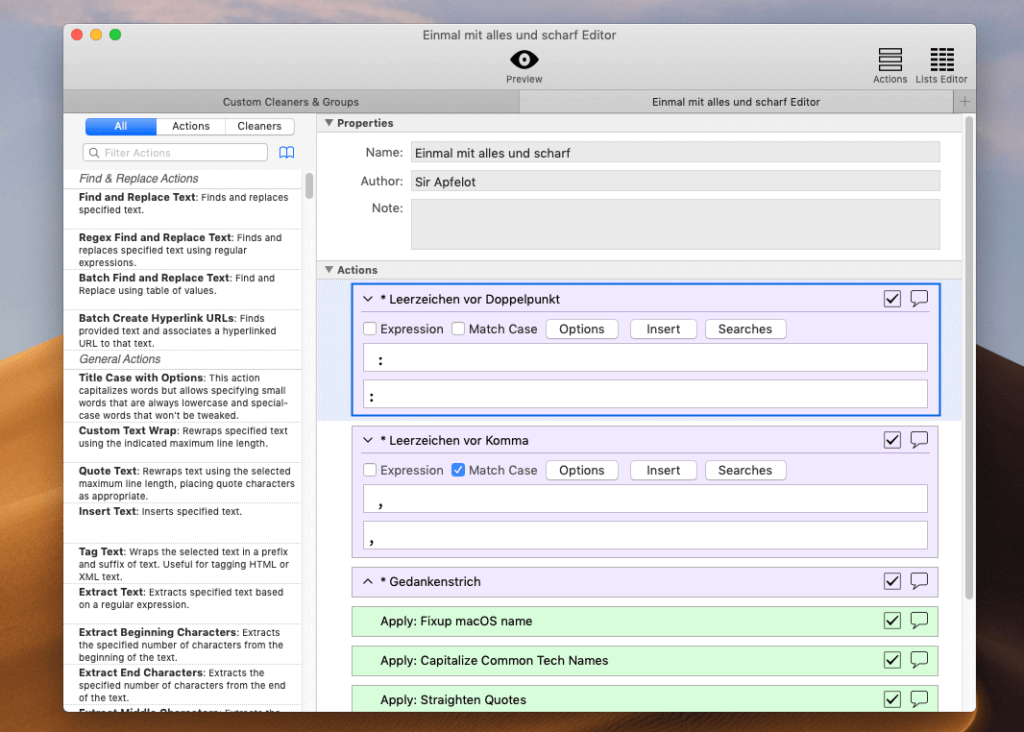 Very simple and effective: In TextSoap you can put together a complete cleaning routine from existing functions and your own creations, which is then carried out with one click.

Very powerful: the ability to build cleansing functions yourself

You can see that there is a function for almost all eventualities. And for what there is no function yet, you can upgrade yourself in the "Custom Editor". This works relatively easily, as you can fall back on predefined functions even in this area, which you can then adjust accordingly.

In addition to normal search-and-replace, there is also the option of cleaning up texts with regular expressions. I programmed a short function of my own here and then added some existing cleaning functions to the command. This complete set can then be freely named and released in the future with a click on the text in the editor.

In the footer of the editor you will find some statistics on the text and you can also adjust the display of the text in the editor. This works a bit more extensively in the settings of the program.

If you think it can hardly be better, then you will find another function that tops it all off: Batch File Cleaning. This allows you to apply your cleaning routine to a whole bunch of texts (format: plain text (txt) or rich text (rtf)). The hearts of many shop owners who have to revise hundreds of product texts to remove certain areas, change spellings or iron out errors are sure to beat faster. With the use of REGEX (regular expressions) there are no limits to the imagination.

I don't have to write a lot of texts at work, but I think there is a lot of potential for saving time in this area. Whenever it comes to masses of text, the batch processing should be a very helpful function. 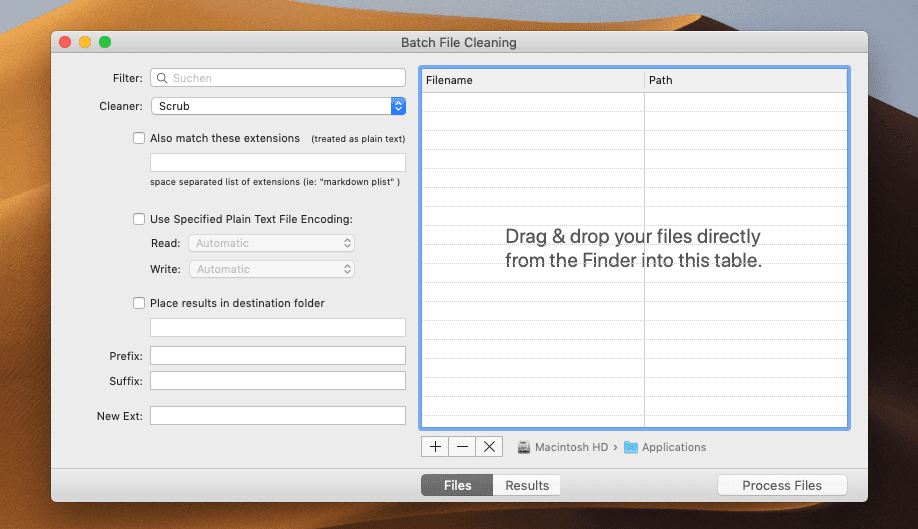 With the batch function, many text files can be edited at once. A function that is worth gold for shop owners.

Conclusion: A must if there is a lot of "foreign text"

I would say that TextSoap is a tool for everyone who has to work with foreign texts every now and then (or more often). When I write blog posts myself, I still get by quite well and stick to my own ideas about typography. Every now and then I correct product names that I used to write like that, but there is usually not much to clean up.

In my opinion, TextSoap always scores when you have to deal with texts from other people a lot. Here the typographical events are often different from your own ideas and you have to correct certain little things over and over again. Not only are these time-consuming jobs, they are also incredibly boring.

In such cases, TextSoap definitely makes it much easier and faster to reach your goal. With a purchase price of approx. 48 EUR per license (for 2 Macs) the tool is not super cheap, but if you have to do with texts professionally, you will quickly have the price back through saved time inside. I have the tool in my SetApp subscription included, which is of course very practical as it doesn't cost me any additional money.

At this point maybe a reference to another helpful text tool called "Get PlainText", which I have activated almost all the time in order to have formatted text in the clipboard converted directly into plain text.

A small drawback of TextSoap is perhaps the fact that the tool is not available in German and that with many functions, due to the English function names, you do not understand exactly what they do. To do this, you would have to know the English names for the typographical special characters or elements that are processed here. Nevertheless, the functions can of course be used in any language. Most of them are language-independent and there are only a few that correct, for example, common spelling mistakes in the English language. From my point of view, TextSoap is worth a recommendation despite this small restriction.

Screenshots of the TextSoap settings

For those who would like to know a little more about the possibilities and setting options of TextSoap, I have attached each area of ​​the "Preferences" of TextSoap Version 8 as a screenshot. Perhaps it will help someone to decide whether the tool is the right one for their own - often very specific - needs. 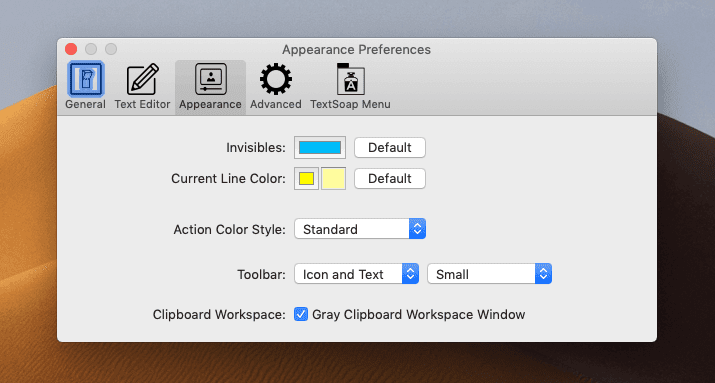 Settings for the view 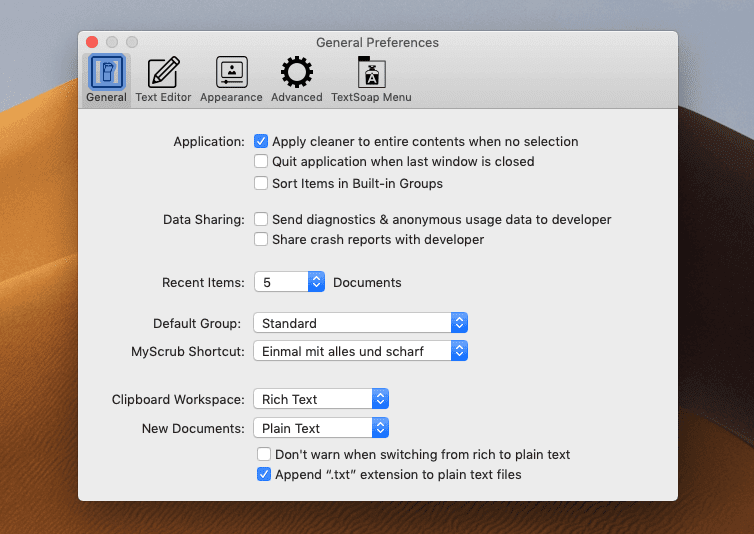 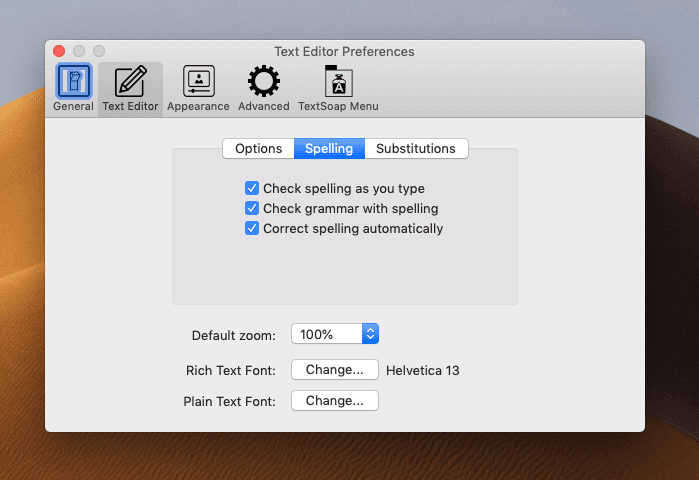 Settings for the editor 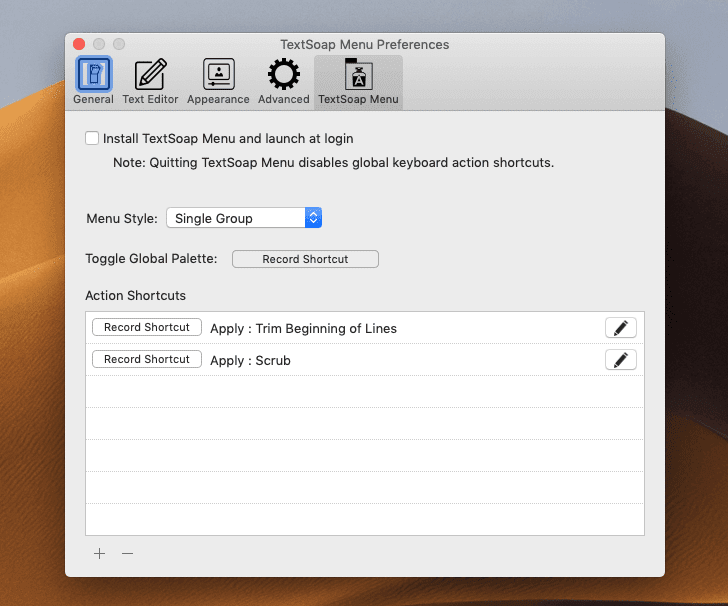 Settings for the menu