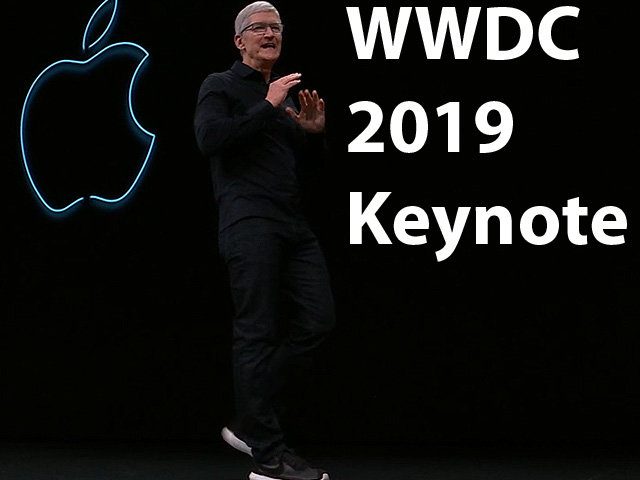 Apple launched its annual World Wide Developers Conference today, June 3, 2019. As part of this there was of course another keynote addressing the latest innovations for iOS, watchOS, tvOS and macOS. But that's not all. The Apple WWDC 2019 keynote brought an (almost) completely new operating system, two new hardware elements for pro users and a new workframe for developers. The new things mean: iPadOS, the Mac Pro 2019 with the Pro Display XDR and the SwiftUI. The latter ensures faster programming of Swift apps for all Apple platforms. Below is a brief summary of all the topics. Tomorrow more in detailed articles ...

PS: If you find spelling mistakes, you can keep them. It's late ;)

After Tim Cook, Apple's CEO, opened the keynote and talked about the services presented in March, there was a sneak preview of an Apple TV + series. The "Fo All Mankind" series is based on the premise that the first person on the moon at the end of the 1960s was not Neil Armstrong or Buzz Aldrin, but a soviet cosmonaut. Exciting when you consider that the Apollo 11 mission will be 2019 years old in July 50 ... After this trailer preview there was some news about the upcoming tvOS 13:

Nothing has yet been said about new Apple Watch models. There will probably be something new at the September 2019 keynote in autumn. However, several new watch faces were presented, which may also contain new or more complications. Among other things, Voice Memos comes to the Apple Watch and can be activated directly from the home screen. These points are also important with regard to watchOS 6:

After the prevalence of the current Android 9 system with 10% on current devices was given somewhat maliciously in the direction of Google and Android, there was also the value of iOS 12: 90% of the corresponding devices have the current system. But iOS 13 is already in the starting blocks. As of autumn 2019, as was seen and heard today at Apple's WWDC keynote, the following functions and options will be available on iPhone, iPad and the new iPod Touch:

Sooner or later Apple had to face the competition and equip its tablets with functions that result in more productivity and better workflows. That now resulted in the creation of iPadOS. The Apple iPadOS for tablets from Cupertino has all the advantages of iOS and combines them with additional advantages on the larger display. In short, these are the features of the new OS for tablets presented today at the WWDC 2019 Keynote:

Before it came to macOS 10.15, a new professional computer for professional users was presented. The new Apple Mac Pro, which is aimed primarily at music and video artists as well as game developers, etc., has an innovative, Apple-specific design that allows a few adjustments inside. Of course with prefabricated or licensed parts and not as free as with Windows boxes, but with super-powerful elements that (according to Apple) produce a performance that has never been possible before. Details about the computing monster with 28-core CPU as well as 1,5 TB of RAM and 4 x Radeon Pro Vega II GPU for a triple stream of 8K RAW video material with effects and filters in real time will be available tomorrow in a separate article;)

From the Mojave Desert it is now on the sea off California. You can read here what it is all about geographically: Santa Catalina Island at Wikipedia. With regard to the new operating system for Mac, Mac Pro, iMac, iMac Pro, MacBook, MacBook Air and MacBook Pro as well as Mac mini, macOS 10.15 means the following: