Will the iPhone never become a USB-C smartphone? 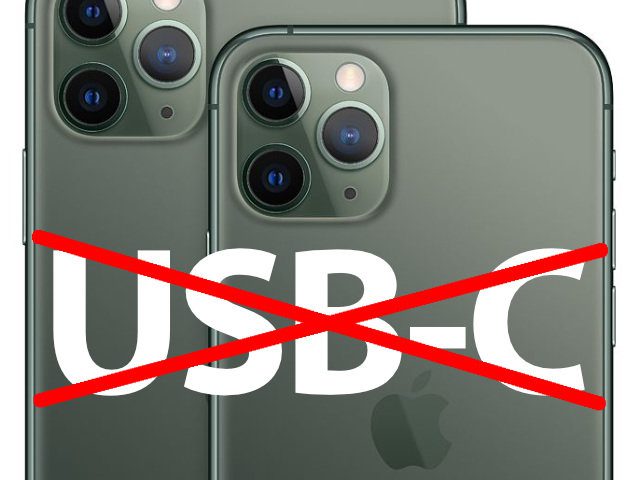 If there is an EU decision, smartphones should have standardized interfaces for charging and data cables in the future - most likely in the form of USB-C. Apple argues rather badly than right against it, but will have to bow when a corresponding directive / law for the European market comes into force. Or not? Because instead of doing without Lightning for USB-C, it could be that the Apple iPhone will no longer have a connection at all from 2021. The battery would then have to be fully charged using Qi chargers. In the following you will find details as well as advantages and disadvantages of the possible procedure.

Would you rather have an Apple iPhone without a connection than with USB-C? Will the smartphone from Cupertino be built without a physical interface from 2021? Here are the advantages and disadvantages.

The advantage of USB-C on all smartphones

There are currently smartphones on the market that use a wide variety of connections. Newer models from the Android area rely on USB-C for faster charging technology, better data transfer and greater compatibility with accessories. But there are also current models Micro-USB-Connection. Apple has been using the Lightning connector as an interface since 2012 (iPhone 5). This means that even in the same household, if the devices are used accordingly, there are up to three different chargers or at least charging cables. Standardization would massively reduce the number of chargers and cables and thus also the amount of electronic waste. And that's why there is a corresponding one EU decision.

Apple: Wouldn't it be better to have no connection instead of USB-C on the iPhone 2021?

It is very likely that the upcoming iPhone 12 models for 2020 will still be equipped with Lightning connectors. But like a golem in one Post shows, this could change fundamentally as early as next year. Referring to a tweet from Apple connoisseur and leaker Jon Prosser (here ) it is shown that at least one of the 2021 iPhone models should not have a connection at all. The lack of a physical interface would mean an efficient circumvention of the EU decision and the EU directive to be expected as a result. The Prosser tweet and Golem show that instead of just one, maybe even all iPhone models could come without a connection in 2021.

Why renouncing makes sense and why not

Apple is not exactly known for bringing particularly open systems or systems that are compatible with technology other than their own onto the market. The iPad Pro models with USB-C are an exception, but they are also aimed at “pro users”, i.e. those who would probably do without the tablet if it weren't for USB-C compatibility. It would make sense not to use USB-C on the iPhone because it is the well-known company policy. That was the case with the first Mac models. Dispensing with any physical interface makes less sense because it has some disadvantages such as a lack of convenience while charging the battery.  Because a smartphone lying on the charging mat is difficult to use.

Advantages and disadvantages of an iPhone without a connection

In addition to the lack of convenience when charging, there are other points of criticism that an iPhone without a connection would have to load on itself. Only if Apple could get rid of the associated disadvantages would the step towards smartphones without a physical interface be worthwhile. Here is an overview:

When I was looking at the then new iPhone X in 2017 wrote about qi chargers, "AirPower" was still under discussion. According to Jon Prosser, a stripped-down version could hit the market in Q4 2020 or Q1 2021 ( ). But wouldn't the charging mat for iPhone, Apple Watch and AirPods charging case be outdated long ago? It can hardly be used flexibly, anything but space-saving and needs a cable with (probably) a Lightning connector. This is absolute nonsense, especially for on the go. So if you currently rely on small, powerful GaN chargers with individual cables, you would need smaller, more flexible solutions, which could continue to be used with the iPhone and which would have high performance - similar to the one with 40 watt charger from Xiaomi.

Conclusion and your opinion on the iPhone without a connection

An iPhone without any physical interface would make sense in a few ways. But the disadvantages would be quite numerous and serious given the current state of the art and its possible uses. Cable connections are currently the best solution, especially for mobile charging of the battery. And the iPad Pro models have also shown that Apple hardware does not lose any functionality or value if it has a USB-C port - on the contrary. So what is your opinion on the subject? Should Apple finally crush the Lightning connector for USB-C? Should Apple hardware forego connections entirely? Feel free to leave a comment;)