The Mac software Ember describes itself as a scrapbook for design ideas.

Many of you will probably still be familiar with the LittleSnapper Mac app. This used to be the non-plus-ultra when you often had to annotate screenshots, arrows, boxes and the like. Unfortunately, the software and the store are no longer being developed RealMacSoftware has an official successor in its program with Ember. With over 40 EUR purchase price in the Mac Appstore However, this has a hefty price, which naturally creates high expectations that the first versions of Ember unfortunately could not meet. After the last update, however, things get more interesting again ...

The developers have already written on their website that they have received many feature requests and are now trying to gradually implement them in future versions. The last update, which has just arrived, is already adding the "Smart Drawing" function to Ember. Behind this is a practical tool for annotating screenshots or other graphics. You can simply draw a cracked arrow, circle or other geometric shape with the mouse and the software will recognize what it should have been and then replace the crackle with a nice shape. Very convenient! 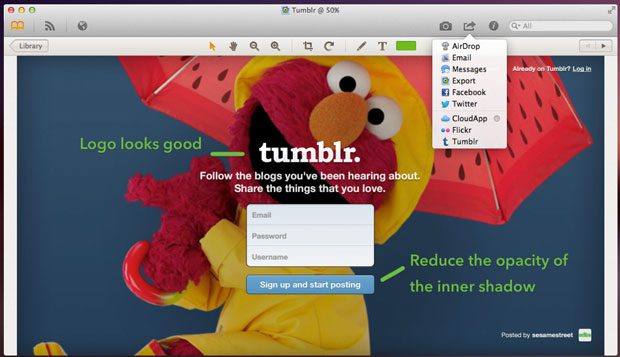 With Ember you can easily annotate a scene with arrows or other geometrical figures.

A hodgepodge for design ideas, screenshots, websites and much more

Ember is not just a simple screenshot app but can also organize many graphics and share them on social media. Channels such as Tumblr, Facebook, Twitter and the like are available for this. When saving websites, Ember is particularly interesting, because with the app you can not only save the visible area but also include the entire website in the album. An important point, especially for web designers, if you want to show customers a new screenshot of the website.