To protect a laptop from theft, there are so-called laptop locks. Windows notebooks usually have corresponding recesses and holes in the housing for the laptop lock. Not so with the Apple MacBook and Apple MacBook Pro / Air. There are only recesses in the housing that accommodate interfaces for cables and peripherals. Nevertheless, there is anti-theft protection for MacBook and MacBook Pro / Air models for everyone who wants to secure their Apple notebook. This provides for an additional component to be glued or screwed to the mobile computer. I have compiled the details for you below.

A laptop lock for the MacBook has to be attached differently than laptop locks for other laptop and notebook models.

This is how a laptop lock works

A regular laptop lock - like this one from Kensington - Has a wire rope with a loop, which is used to attach the safety mechanism to the table leg, a hole provided for this in the desk top or elsewhere. Furthermore, a locking mechanism or a combination lock is attached, and finally a T-piece that is inserted into the corresponding recess in the laptop housing. By turning the T-piece by 90 °, it is “locked” so to speak and the computer is secured. Without the key, the numeric code, a bolt cutter or the damage to the device, it can no longer be stolen.

A laptop lock for the MacBook works on the same principle, only that a recess has to be created for the T-piece. But don't worry: you don't have to mill around the housing or something. Rather, a small component is glued (or screwed on) to the MacBook, in which there is a slot for a T-piece as described above. It is best glued to the top, i.e. the back of the display; because it doesn’t interfere either during transport or when using the laptop. A laptop lock for MacBook / Pro / Air can be found on Amazon in various designs, such as . or . or .. 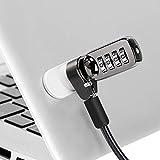 CaLeQi lock, interface and cable
The set includes the adhesive for the MacBook, the laptop lock with combination lock and a 2 meter long wire cable.
14,99 EUR
Buy it at Amazon Price includes VAT, plus shipping costs (updated: 3.12.2021 at 03: 20 clock) 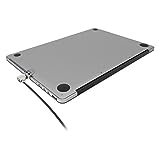 7 Reviews
Maclocks lock to screw on
The set includes the cable with a laptop lock for the MacBook, two keys, a long housing screw to attach to the underside of the laptop and a screwdriver.
157,17 EUR
Buy it at Amazon Price includes VAT, plus shipping costs (updated: 3.12.2021 at 03: 20 clock) 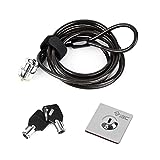 I3C lock, cable and interface
The cable lock for notebooks, cell phones, tablets and other devices is also glued on and attached to a fixed / anchored object with the cable.
15,99 EUR
Buy it at Amazon Price includes VAT, plus shipping costs (updated: 3.12.2021 at 03: 20 clock)

The above laptop locks with additional parts for laptops without their own lock recess can of course also be used on other devices and objects. For example, you can stick them on the Apple iPad, iPhone, iPod or their cases. Of course, the latter only makes sense if the cover is firmly in place and cannot be removed quickly. In the office, in the coworking place, in the hotel or at the conference you can use such locks to securely "chain" laptops, cell phones, tablets and much more in one place. Do you have any other tips on the security of computers and co. In addition to the laptop lock for MacBook and tablet lock for iPad? Then leave a comment;)