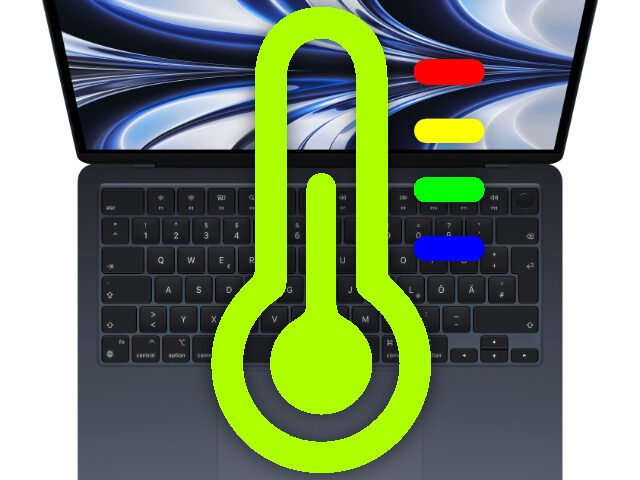 TL; DR: Here you go directly to the thermal pads

If the Apple MacBook Air with the M2 chip doesn't get hot as quickly, the CPU and GPU won't be throttled as quickly either. Better heat conduction - for example with thermal pads in the housing and a laptop cooler - ensures faster work on the laptop. Image Source: YouTube / Max Tech

The trick, as you can see from the article linked at the beginning, is anything but new. However, it can be seen again that there is enough leeway in the new MacBook Air to make your own improvements due to the lack of a heat sink. How this is done is shown, among other things, on the YouTube channel "Max Tech".

There, the housing is unscrewed, the position of the M2 chip and the application of the thermal pads are shown, and various comparison tests are carried out. The result: thanks to better heat dissipation, the laptop does not overheat as quickly, performance is not throttled as quickly and tasks are ultimately completed more quickly.

You get the heat conducting discs made of silica gel material used in the video with this link. If you don't have the right tool ready to unscrew the MacBook Air, you can certainly use the various screwdrivers and repair kits from the iFixit store help. There is also one Video Tutorial for unscrewing and disassembling the complete hardware.

To insert the thermal pads in the MacBook Air, all you really have to do is loosen the four screws on the bottom of the case and pull off its plate - as shown in the video embedded above. Then the gel pads come on the area where the chips are located, and everything can be screwed back together. The resulting heat is now conducted more directly to the housing.

As you saw in the Max Tech video above, the MacBook Air was placed on a wooden tabletop the entire time. And this material is not known for its high thermal conductivity. However, since the heat from the processors is dissipated downwards, I would recommend a different placement of the laptop - on a laptop arm or a laptop cooler.

The Metal laptop arm ensures that the MacBook Air is lifted off the tabletop for better ventilation. In this way, the dissipated heat is not accumulated outside the housing, but rather dissipated. It's even faster with a laptop cooler, as it blows cooler air onto the case all the time and thus promotes its cooling. In combination with the heat-conducting pads, there is certainly a noticeable increase in performance of the M2 MacBook Air.