What are .THM files? 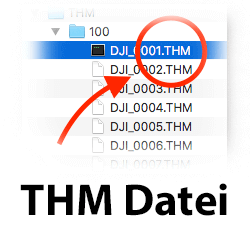 When I took the SD card out of my today DJI Mavic Air have fished, I noticed some files with the file extension ".thm" in a folder called "MISC" and there in a subfolder called "THM". If you mark such a file on the Mac and press the space bar, the view opens in QuickView and you can see a small preview image. 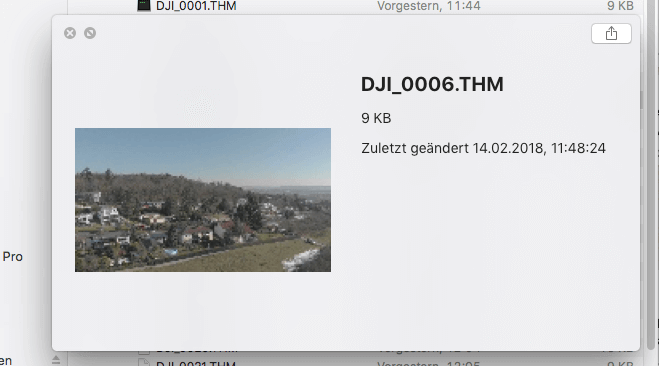 The THM files are small preview images of videos. The Finder shows the information of the file including the mini-picture.

The files with the ending "thm" are small "thumbnails" (hence probably the abbreviation) that are generated so that you can preview the film recorded by the drone in the DJI Go app.

Also occurs on other cameras 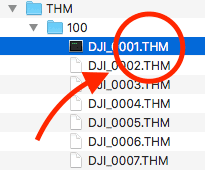 Here on the SD card of my Mavic Air: several files in the THM folder.

These thm files are not only used by DJI, but are also created by Canon cameras or other models when recording a film. With me on the Mac, I couldn't get any EXIF ​​data from the THM files, but according to other users there are also EXIF ​​data with GPS position and the like in the files of the Canon cameras.

How can I open THM files?

It's relatively easy: You don't even need an extra program on the Mac, you can open the files using QuickLook or the preview app. Of course, any image editor such as Adobe Photoshop can also process these small thumbnail files.

Windows users should also achieve their goal with normal image processing software. There are certainly "on-board tools" in Windows 10 that can display the contents of these files.

Can I delete the data?

Generally, yes. They are only previews of the actual film data, but they are not affected by deleting the thumbnails. Under certain circumstances, these thumbnails take up a lot of space on the SD card at some point, as you usually only pull down the correct films and leave the THM files on the card. For this reason, it is advisable to format the SD card every now and then so that such "file remnants" do not get out of hand.