Thunderbolt Docks in comparison: Elgato, Belkin, Matrox - which one should I use?

Since I've been working on the MacBook Pro retina, I've been toying with buying a Thunderbolt dock for a long time. These small boxes are extremely practical when you have to have various peripherals plugged into the MacBook, but also have to get going with the MacBook at short notice. Usually the big unplugging starts and you think twice about it. For this reason, I often fail to blog on the balcony because I'm just too lazy. :)

If you have a Thunderbolt hub - as the small docks are also called - on the MacBook, all of the peripherals such as printer, scanner, external hard drives, speakers, headphones and even network plugs and microphone are plugged into this device and you only have one cable for it Connect the MacBook power supply and a Thunderbolt cable for the hub to the MacBook. This makes things much clearer and tidier. And especially with the MacBook Air, you no longer have the feeling that the cables need more space than the computer itself.

There are still Macs that already have a Thunderbolt port, but no USB 3.0 port. For these owners, the purchase of a Thunderbolt dock is definitely worthwhile, because the Mac is "upgraded" to USB 3.0 and you can also plug in the fast and inexpensive USB 3 hard drives in the future. You will clearly notice the difference in speed and you have the other advantages that the TB hubs bring with them.

The back of the Belkin Thunderbolt Dock shows the many connection options (Photo: Belkin).

Which manufacturers and products are there anyway?

The range of Thunderbolt docks has grown significantly recently. Because the devices are slowly but surely becoming cheaper, there is also more demand for Thunderbolt devices and, of course, more providers. During my research, I found the following products and manufacturers that offer such docks:

You can already see that the selection has become quite large. In my opinion, the Matrox DS1 will no longer be available because it only supports Thunderbolt 1st generation. Akitio Thunder Dock does not run with Boot Camp. From CalDigit you can currently only order the old version with Thunderbolt in Germany. And OWC can only be ordered in a US shop with delivery to Germany. These points were all knockout criteria for me, so that's only for me Sonnet, Elgato and Belkin were shortlisted. 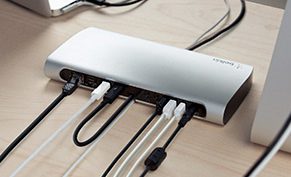 I always read the same questions in various forums and comments in test reports. So that these are clarified right away, I have put together a short list (with the appropriate answers!):

Comparison between Sonnet, Elgato and Belkin

If you look at the docks of the above manufacturers in comparison, it is noticeable that the Sonnet Echo 15 Dock clearly stands out from the solutions of the other providers, because it not only has a Bluray player (read only!) But also a place for a storage medium built in for the TimeMachine backup. That sounds very practical, but it not only affects the price, which is almost twice as high as Elgato and Belkin, but also the size, because the dock is quite a block. And if you like it a bit more bulky and expensive, you can even buy the Sonnet Echo 15+ Pro - there is even a Bluray burner inside and you have an additional slot for a 2,5 inch SSD / HD.

The Sonnet Echo 15 Thunderbolt Dock is equipped with proper interfaces, but is too expensive for my budget and has too many bells and whistles. I'm looking for something more elegant.

Since I don't watch Blurays on my Mac and I don't need another external TimeMachine hard drive, I was more likely to compare Elgato and Belkin. The Sonnet Dock was neglected in my decision, although it might be interesting for someone who is still looking for a Bluray player and a TimeMachine record.

Elgato and Belkin: What They Can or Can't Do ...

There isn't really much difference between the two Elgato and Belkin docks. Both support HDMI 1.4b and can work with 4K monitors (at 30 Hz). Both have NO FireWire800 port and NO eSATA ports, NO USB 2.0 ports and NO DVI output.

Otherwise, both Thunderbolt docks have the same features:

Even the price is almost the same: The Elgato Dock costs with the current research approx. 230 EUR on Amazon and I baked the Belkin Dock costs around EUR 250. Attention: The Belkin article description from Amazon says it would have FW800. This is not correct and has also been confirmed as an error by customers.

When two products are so close together, it is ultimately the details that determine the purchase decision. In tests of the USB 3.0 speed, for example, it was found that the Belkin Dock only manages 2,5 Gbit / s here, while the USB 3.0 is normally at 5,0 Gbit / s. This is clearly a point in favor of the Elgato Thunderbolt Dock.

Next, I read through the customer ratings. There were some Belkin users who couldn't get their external monitor to work. According to her, the source of the error was the dock, as the monitor - connected directly to the Mac - worked. The support staff couldn't seem to help either, so the dock was sent back.

The Elgato Dock had problems with the Ethernet connection. Here, some users had the problem that they had to unplug and plug in the network cable when the Mac was in sleep mode or without power. I'm assuming this is a firmware or router problem. Most customers are apparently happy with the device.

Everything out with one click: The Elgato little helper.

Another nice detail is the Elgato utility that can be found in the menu bar. If you have to get going quickly with your MacBook, but still have three external hard drives on the dock, then you usually have to set them all up individually. That slows down unnecessarily - thought Elgato - and has set up an option in the menu bar with which you can eject all devices connected to the dock with one click. Small detail but very practical in everyday life!

Personally, I would use the Elgato Thunderbolt 3.0 Dock because of the speed on the USB 2. The nice side effect is that it is also a little cheaper and can even be delivered immediately at Amazon. If you are more of a Belkin fan, you shouldn't go wrong with the Belkin Dock. For this reason I am listing both here:

The Apple solution - expensive but stylish

For everyone who has been looking for a Thunderbolt Dock that also has a MagSafe connection, I would like to introduce the Apple Thunderbolt Dock with an integrated monitor. It is a bit more expensive than the rest at just under 900 EUR and you only get Thunderbolt 1 support, but there are extras the 27-inch monitor and a MagSafe port to which you can plug your MacBook Pro or MacBook Air. This is how it is charged - as desired - plugged into the dock:

Apple MC914ZM / B Thunderbolt Display 27 inches
In any case, Apple's Thunderbolt display is a very nice monitor. I just think it's a shame that it doesn't have a Thunderbolt 2nd generation and retina resolution yet. But I am sure that Apple will improve this soon!
Buy it at Amazon Price includes VAT, plus shipping costs (updated: 16.09.2022 at 20: 36 clock)