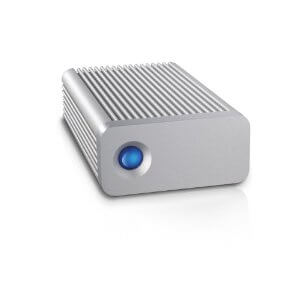 The LaCie hub offers connections for Thunderbolt and eSATA and can be operated easily on any newer Mac via Thunderbolt (Photo: Amazon.de).

The LaCie eSATA TB Hub offers interesting options for connecting fast external hard drives to a Mac with a Thunderbolt port. In addition to the power connector, there is also a number of other interfaces on the back of the stylish device: It has two Thunderbolt and two eSATA sockets. The speed of Thunderbolt is a maximum of 10 Gbit per second. eSATA still achieves 3 Gbit per second. In comparison, Firewire 800 only has 800 Kbit / s.

A use case for the Thunderbolt hub would be, for example, to connect two [eSATA hard drives-> esata] to the hub, via which large amounts of data are to be archived and copied. Furthermore, two [Macs-> imac] can be connected via the two [Thunderbolt ports-> thunderbolt].

Here is a short product listing of the eSATA / Thunderbolt hub on Amazon:

One possible eSATA hard drive that can be used with the hub is this:

It is also important that you order the corresponding Thunderbolt and eSATA cables at the same time, because the manufacturers usually save these. With Thunderbolt cables in particular, manufacturers are missing out on a decent investment. Here are the matching cables that can be used for the hub:

Thunderbolt cable from DeLOCK with a length of 1 m
An inexpensive alternative to the original from the apple company. The cable is also available with a length of 2 m.
Buy it at Amazon Price includes VAT, plus shipping costs (updated: 18.10.2022 at 00: 46 clock)

Compared to the Thunderbolt cable, the eSATA cable from DeLOCK is a real bargain:

DeLOCK eSATA cable - 1,5 m long
This cable can be used to connect the external eSATA hard drives to the LaCie Hub.
Buy it at Amazon Price includes VAT, plus shipping costs (updated: 18.10.2022 at 00: 46 clock)
Sir Apfelot recommendation: Clean up your Mac hard drive with CleanMyMac