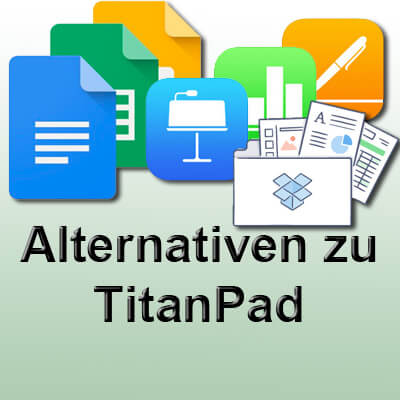 TitanPad, like Etherpad, is (has been) a very nice web tool to edit documents together with others; simultaneously, with comments and locally independent. Since TitanPad announced in November 2016 that the service would be closed, it is important to look for an alternative. Etherpad is a similar service, but the big names in the scene such as Apple Pages, Google Docs and Dropbox Paper offer many more functions and sometimes safer and / or simpler working environments with higher quality functions.

In 2016 it was announced that the TitanPad would close, pads will be frozen in May 2017, and from 2018 the service can no longer be used. You can get alternatives for online documents for simultaneous editing here.

The schedule for the termination of the TitanPad service looks like this official statement the makers as follows: On May 1st, 2017 all pads or documents created so far will be switched to read-only mode. In addition, no new pads can be created. On December 31, 2017, TitanPad.com will be completely taken offline. So if you are currently implementing projects with TitanPad, you should transfer them to an alternative as soon as possible. Etherpad, an open source software for joint and simultaneous editing of documents, has a similar look. You can find Etherpad for Mac and Windows PC at Etherpad.org and on GitHub.

If you want to pitch ideas to your colleagues, send links or share other simple text input with them, then you could ProtectedText be right for you guys. Creating a document is very easy: Enter ProtectedText.com/YourFileName (instead of “YourFileName”, of course, something of your choice) and get started. When you save, you set a password that you pass on to your colleagues to share the document. Finished.

(Update) Padlet: a simple cross-platform workspace with many features

Padlet has, probably with the wish to be included in this list, in a nutshell reported via Twitter. I checked out Padlet's website and was surprised by the modern interface and many functions. In addition to the answer on Twitter, the makers of Padlet also prove on their website that they have a sense of humor (see picture with reference to the BlackBerry functionality). But to the tool itself: many files are supported, you can add project members, assign read, write and admin rights, create profiles and everything via one App to use. You will get more details on the padlet page.

All Padlet features are available in their entirety on the linked website. Alternative to TitanPad? Definitely!

Actually, I still wanted you guys hack pad describe in more detail, but that was probably bought by Dropbox, which is why I come straight to the well-known providers. Hackpad is still offered in the old scope, but maybe it will work in Paper from Dropbox in the future. It is uncertain.

So let's start right away dropbox Paper at. If you already use Dropbox, you should be able to find the item "Paper" in the main menu of the website or app. I personally use the free version of dropbox and also from Paper. I share documents through the service Jens and we often process the same documents at the same time. That makes task allocation and processing quite easy. Comments in the margin allow ideas to be exchanged about the main text. Images can also be inserted. The automatic notification that you receive once a day by email when changes are made to a doc is also very helpful. The practical: The changes can already be read in the email, so that you can see immediately what is new or changed.

Dropbox Paper is an easy-to-use service for sharing and collaborating on text. Comments and inserting pictures are possible. Meetings for Sir-Apfelot.de are realized with it;)

Creating and sharing documents online is also interesting Google Docs. Anyone who has a Google account, which is almost every internet user, can access Docs to share documents, assign tasks and so on. The user interface is also very sophisticated, giving you the feeling of working online with Word or Excel. Because in addition to Docs (word processing), there are also tables (spreadsheets) and presentations (something like PowerPoint or Keynote). Especially for more complex projects, for sharing finished documents (manuals, instructions, etc.) I think Google Docs very good. Personally, however, I only use it very rarely.

Google Docs comes in handy when you share documents using Google Drive. In addition to word processing, a spreadsheet and an area for presentations can be used free of charge. The individual docs appear in preview mode, which is very useful.

The third alternative, which of course should not be missing in an Apple blog, is Pages or iWork from Apple. With Pages (view here as an app) you can work together and simultaneously with others on complex documents and publications. Again, there are three main areas: Pages (cf. Word or Docs), Numbers (cf. Excel or spreadsheets) and Keynote (cf. PowerPoint or presentations). Apple offers you a comprehensive support article on the subject here.. In addition come Explanations about iWorkrunning through iCloud.

iWork explained at the Apple Keynote 2016

iWork and what you can do with it was shown at Apple's September 2016 event. In the following video you can see the explanation and a demo from the position 15:50 to approx. 20:00:

I find Dropbox quite convenient and sufficient for my current needs, but from my own experience I am not averse to Google Docs or Google Sheets. This can also be used in conjunction with Google Drive - similar to Pages, Numbers and Keynote with iCloud. Which service or services do you use to share and edit team documents? Are you looking for right now Alternatives to TitanPad? Please leave your opinion and your experiences as a comment;)