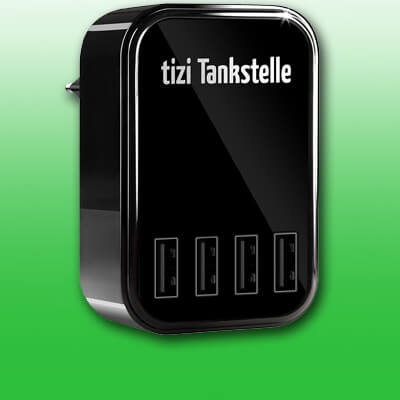 The tizi petrol station Eco is the revised again Version of a very practical USB power supply unit, with which you can charge up to four devices such as iPhone, iPad and so on at one socket. The tizi petrol station Eco from the manufacturer Equinux looks very valuable, and when traveling, its compact size of 7,1 x 4,8 x 2,8 cm makes it an ideal helper and a good remedy against too many individual USB chargers.

The tizi petrol station Eco in action. Up to four devices can be charged at the socket via USB. Up to 2,4A are possible, which is ideal for the iPhone. A practical USB power supply.

The predecessor of this USB charger comes with a similar design. However, LEDs are also built into it, which visually highlight the operation of the individual USB ports. These do not apply to the eco version. In addition, the predecessor gas station has the USB ports on the underside; the Eco version offers it on the front panel. In short: omitting the LEDS saves (minimally) electricity, but above all components and costs. The USB connections on the front also save the user time, as plugging the USB cable into the underside of the tizi petrol station can be awkward so that the USB charger is already plugged into the socket.

USB chargers with added value: Alternatives with a Schuko socket

That the articles from Equinux tizi are useful, that was stated here in the blog yes already confirmed. However, the individual solutions are not egg-laying woolly milk sows. So the tizi petrol station Eco for example a socket, which could become a problem if there is a lack of sockets (hotel, hostel, old building, etc.). There are solutions for this in the article on USB chargers with Schuko socket.

If you are often on the go and despite having several devices (iPhone, iPad, MacBook, other smartphone / tablet / notebook) you don't want to carry a distribution strip around with you, then maybe this is the PowerCube multiple socket something for you. In conjunction with the tizi petrol station Eco, it offers 6 USB connections - and several Schuko sockets!

So there is a suitable solution for everyone - which one did you find for you?