App of the week: Tsuro - a quiet puzzle for 1 to 8 people

Tsuro - App of the week!

As every week, Apple is also releasing an iPad or iPhone app for free download this week for a limited time. This time around, it's definitely a game to watch again. "Tsuro - The Way of the Path"is the name of the puzzle app from Thunderbox Entertainmentthat you can play alone against the computer or with 2 to 8 people on the iPad or online with friends. Of course also with any combination like 3 real players and 2 computers ... you already know what I mean. : D

But now back to the iOS game: Even if it is an iPhone or iPad game in this case, Tsuro originally came onto the market as a real board game. Accordingly, the app is designed in such a way that it reproduces the board game with pieces and cards. And that turned out very nicely!

The gameplay is turn-based. This means that the game begins with each player setting up his stone at a freely selectable position on the edge of the field. Then the moves are carried out one after the other. A move consists of drawing three cards and placing a card of your choice, which is then placed in front of your own piece.

Different lines can be found on each card, which, so to speak, indicate the path of the figure. You can also turn the cards and thus influence the path of the piece. When you have put down the card, the figure is moved to the place on the card to which the line - i.e. the "path" leads it.

In the following video you can take a closer look at the gameplay. After the video, you actually understood how the thing works in theory.

Goal of the game

The aim of the game is very simple: stay on the board as long as possible! Whoever comes to the edge of the playing field with his character is kicked out. And as if it wasn't difficult enough to control your own piece in this way, there is also the fact that you "have to" react to cards from your opponent. This means that when the paths cross, you have to draw the lines that are already there to the end (and that is not infrequently the end!). This makes things very exciting and more or less unpredictable, especially when there are several players.

By the way: if two pieces collide, both players are kicked out. This has actually happened quite often in my games, when it was the turn of "stupid" computer opponents who didn't seem to think about it ...

When choosing the computer opponents, you can set their intelligence between stupid and tricky. At the beginning I recommend "stupid", otherwise you have to have a high frustration threshold. ;-)

Fortunately, when you start the app, a virtual player will take you by the hand and briefly explain how Tsuro is played. And because the programmers don't want to demotivate the player right away, the game can also be played with up to seven computer opponents whose skill level can be set from "stupid" to "clever" to "tricky" (individually for each individual opponent). With "stupid" I still had real chances, but with "clever" the strength of the opponents was so high that I only won a game with several opponents every now and then. You probably don't want to try "tricky" at all. ;-)

Here you can see my grandiose departure, which unfortunately I could not avoid because my "clever" computer opponent had built me ​​in. Thanks again for that! :-P

Tsuro as a real board game

If you like Tsuro as an app, I can recommend the "real" board game. With it you can start a game night comfortably at your living room table (or dining table!) With real cards (yes, you used to do that when there were still telephones with cables!). The game is currently available on Amazon for just over 30 euros as a UK import via Prime. Since the entire game is virtually "speechless", you can have it come from England without hesitation - there is nothing to read. ;-) 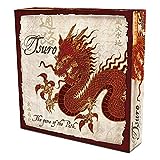 Tsuro UK import
The journey is the goal - this could be the German slogan for Tsuro. And that's exactly how it is. With up to eight players you can plan your own path as well as that of the other players. A nice puzzle fun for children and adults.
42,29 EUR
Buy it at Amazon Price includes VAT, plus shipping costs (updated: 14.01.2022 at 18: 50 clock)

I'm not a fan of hectic games that are played for a while. With that Tsuro hits exactly in the "right notch" with me. A visually appealing puzzle that sometimes makes you wonder. The nice thing is that the game principle is so simple that you can play Tsuro with children from 5 to 6 years old. According to the manufacturer, it is recommended for ages 8 and up, but I think that if you don't play mercilessly nasty as an adult, even small children can enjoy Tsuro - both on the iPhone or iPadhere is the link to the app store) as well as on the real game board!