Which is more secure: 9-point unlocking pattern for Android or 6-digit PIN for iPhone (iOS)? 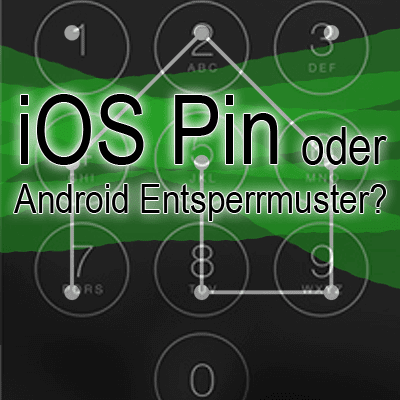 Under iOS you can secure your iPhone, iPad and so on with a PIN of 6 digits, under Android you can set an unlocking pattern of 9 connection points. But which method is safer and why? In this little post I would like to give you a few tips for your smartphone security and your lock screen. Because the lock screen is the first hurdle for those who want to use your iPhone or Android smartphone without authorization.

A six-digit PIN can be set up under iOS for iPhone and iPad; For Android smartphones and tablets, it is an unlock pattern with a maximum of 9 contact points. The house of St. Nicholas is theoretically possible ...

Both have the disadvantage that many users resort to simple combinations. Even if the PIN is more difficult to see or difficult to understand based on the traces on the display, it must also be complex if it is to protect. Number combinations such as 0-0-0-0-0-0 or 1-2-3-4-5-6 are not suitable for securing the iPhone. The date of birth DD-MM-YY can also be guessed quickly by people who know about something. The same applies to the Android unlock code. An L-pattern or an M or W are easy to guess, especially if the name of the user starts with it.

The fingerprint: an alternative to both security measures

Both the iPhone and Android devices of the newer generations have the option of regulating the release of the system via the fingerprint. True, this is also not 100% surebut still less vulnerable than iOS PIN or Android unlock pattern. While there are secure and less secure patterns and PINs, using the fingerprint to secure or unlock the smartphone is a very effective measure for the average Otto user.

Below I have included a video for you, which is about the 9-point unlock pattern on Android smartphones. Which unlocking patterns are there, which ones are often used and what can you do to really secure your smartphone with it? These and other questions are answered. This video is also mentionedwhich really shows all possible combinations (in 12 hours!). Here is the short video: