USB 3.0 hubs for the Mac - a preselection with a recommendation

The fact that Apple finally supports a USB3 port with the new Macs was an urgently needed thing. Thunderbolt is also nice (fast), but unfortunately there are hardly any devices for it and what there is is simply extremely expensive. My MBP 15 inch has two USB 3 ports, but I recently had the case that I would have needed 3 of them. And then I had to work with a USB-1 (!!!) hub that I once received from a domain registry as a promotional gift - so real quality material. :)

But not only the MacBook Pro is a candidate with few USB ports. The Mac mini and MacBook Air models are not exactly "overcrowded" with USB sockets. The extreme case is likely to be the 12 inch MacBook, which only has one USB C port and is even charged via it - but unfortunately no USB 3.0 hub fits on this MacBook.

The article is now some time old and I was able to gain a bit of experience with my hub on the Mac. I am currently using one 7-port USB hub from Ankerthat works on the Mac and also has three fast charging ports (each up to 2,1 A!). The device is absolutely reliable and the charging ports are very useful if you want to charge your iPhone or other devices at the same time. It offers 60 W of power, so there is enough power to operate multiple external hard drives on the USB hub without interference.

In addition, I have had very good experiences with the manufacturer, Anker, if something doesn't work. They exchanged another device for me after more than a year without any questions, so that I can continue to be a "satisfied Anker customer" - this is how customer service works. The hub is there here at Amazon. 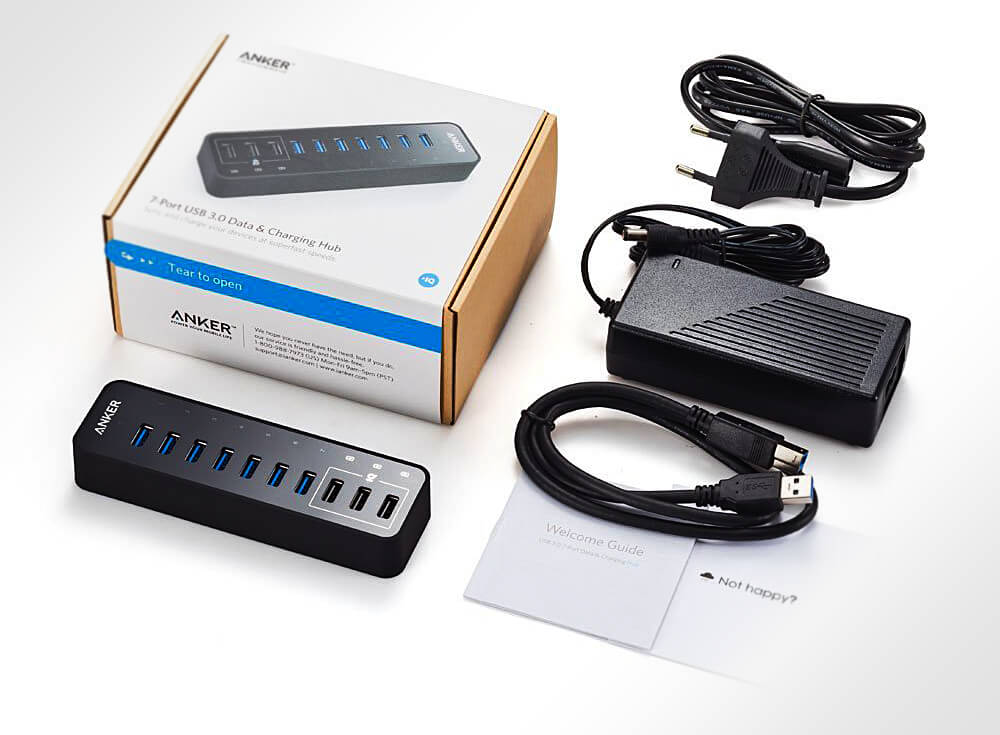 The 7 port Anker USB 3.0 hub for the Mac naturally also works with other devices that are not from Apple. The three charging ports are helpful for smartphone and tablet users - the hub is available on Amazon.

Weak point of many USB hubs - not only on the Mac: power supplies with insufficient power

Well, I thought, USB 3 hubs can't be that expensive, so I'll quickly find one and order one. But already after a short reading of the [Reviews from Amazon-> amazon-de] I was a bit confused, because the devices that were rated relatively well all had total failures in the ratings - that is, 1-star ratings with comments such as "It does not work!" or "disks disappear during operation" and the like. The problem with the hubs seems to be that they have too small a power supply unit and so quickly go to their knees if, for example, two external USB 3 hard drives are clamped to the hub. These of course draw more current than a mouse or keyboard and a voltage drop due to excessive load on the hub is then often acknowledged by the hard drives logging off and "disappearing".

Disappearing hard disks are definitely not a nice thing when data is being written on them, because in no time you screwed up the disk with them and that is particularly the case when you work with external USB 3 SSDs, because the SSDs distribute the data yes, particularly diligent and a spelling mistake in the file allocation table and all the data are so wasted that even a [data rescue service-> data rescue] probably only gets data muscled out. So caution is advised when it comes to the selection of USB 3 hubs - and this does not only apply to Mac OS X users ...

One more note for Owner of the Apple Superdrive: This external drive does not work through a hub. Apple has once again built in its own magic, which means that the drive is no longer recognized by the Mac if you hang a USB hub in between. So either you plug the Apple Superdrive directly into the Mac or you have to get one inexpensive alternative search.

USB 3.0 hubs with IDF certification - important, but impossible to date?

If you are looking for good quality, you should first look around for certified hubs, because for the USB-3 standard there is IDF certification, which devices receive that have been appropriately tested and found to be good. Unfortunately she writes chip in September 2012 that the consortium for the certification for USB 3 could not yet commit to a test suite for USB 3 and for this reason the manufacturers did not yet have the opportunity to have their devices tested and certified. Basically, there would be nothing wrong with the current USB 3 hubs, such as the VIA VL811 and VIA VL812, because they would probably work with most USB devices. Only a guarantee that you will work with everyone and also create the maximum data throughput would not exist.

At the moment I have no choice but to do Customer Reviews, Forums and reading tests and then looking for a suitable hub for my [MacBook Pro-> macbook-pro] and [my iMac-imac]. I have rummaged through many pages over the last few days and ultimately there is only one device that I would really recommend 100% and that is the Exsys hub "EX-1188HMS" (see below). It also has a power supply unit with 5 volts and 6 amps in the scope of delivery, which you won't find in other suppliers. They often advertise that they are supplying "fabulous" 3A power supplies. For the sake of completeness, I've also listed other hubs below that are also rated good, but none of the other hubs can match the top ratings of the Exsys hub.

EX-1188HMS USB 3.0 HUB with 7 ports
The USB-2 hub from Exsys has already received an astonishing number of 5-star ratings, including from users who had it in a long-term test for 2 years. Big advantage of this hub: The power supply, which is often the weak point in other hubs when 2,5 inch hard drives are attached, is large enough to supply several external hard drives with power.
Buy it at Amazon Price includes VAT, plus shipping costs (updated: 14.09.2022 at 11: 43 clock)

Here are a few USB3 hubs that are also well rated and relatively cheap to buy. However, I don't want to hide the fact that all of them have a few 1-star ratings. It's often hard to tell if users are simply using something wrong or have actually discovered a shortcoming in the hub. But I hope I made a good selection for you guys.

Uspeed USB3 hub with 7 ports and 1 charging port
It is often pointed out that you should not charge your iPhone or iPad via the USB hub because it is not designed for the enormous currents that the iOS devices draw while charging. The manufacturer of this hub has now integrated a separate charging port where you can charge devices with up to 2A. In addition, customers report that there was a firmware update 11-2012, which now also offers full support with the MacBook Pro Retina (and probably also the new iMac).
Buy it at Amazon Price includes VAT, plus shipping costs (updated: 14.09.2022 at 17: 16 clock)
10,25 EUR

Transcend TS-HUB3K hub with USB 3.0 and fast charging port
For less than 20 EUR, the 4 port hub from Transcend is not bad either. Although it has a 1-star rating, it is probably not really due to the quality of the hub. Another customer gives 5 stars. You shouldn't forget that the USB cable as well as the firmware and the operating system are necessary for the interaction and that if there is a problem at one of these points, the hub will quickly be devalued. The hub's fast-charging port is sure to be of interest to people who want to charge the iPad or iPhone.
33,90 EUR −2,91 EUR 30,99 EUR
Buy it at Amazon Price includes VAT, plus shipping costs (updated: 14.09.2022 at 11: 43 clock)

I have read several times that it can happen that USB 3 hubs or other USB 3 devices can interfere with the wireless connection of Bluetooth devices. Apple even has it a support document issued. There have been a number of reports from users who have written that their mouse or keyboard has been disconnected from time to time and then reconnected a few seconds later. One solution for this is to simply move the USB-3 devices a little further away from the computer and keyboard / mouse. To do this, simply get a longer USB-3 cable or a USB-3 extension like this one:

USB 3 extension from DeLock (1 m)
If the USB 3 hub or the USB device has a permanently connected USB cable, you have to work with an extension. This one from DeLock does its job very well.
8,83 EUR
Buy it at Amazon Price includes VAT, plus shipping costs (updated: 14.09.2022 at 11: 43 clock)
-