USB load resistor: what can it do, what is it intended for?

In my power bank tests, like recently the one Charmast power bank, a USB load resistor is used regularly. In this article I would like to explain to you what kind of thing it actually is and what - in my case - the purpose is. If you like abbreviations like mAh, Wh and the like already gets a headache, I can reassure you: I try very hard that the article is also understandable for electrical laypeople.

Note: I am not an electrical specialist and have only taught myself these things. Please forgive me if there should be one or the other technical error in the article. If you let me know, I'll be happy to correct it.

A small excerpt of my USB load resistors, which are mostly equipped with USB-A plugs, but some also have Micro-USB, USB Type-C or even Lightning sockets (photos: Sir Apfelot).

Load resistors are not only used in connection with the USB connection, but also in other areas. They make it possible to simulate a consumer - as a device that consumes electricity - whose properties can even be adjusted.

That means I can adjust the power the resistor uses with a regulator to make it work as a constant current load. In the model I use, you can see two potentiometers, which I can use to make a rough and then a fine setting of the current intensity. Since the USB-A port always has an output voltage of 5 volts, the calculation of current times voltage results in the electrical power (I * U = P) that is consumed.

In the left picture you can see the large electronic component that converts the electricity into heat. However, the active cooling with a cooling plate and fan means that the temperature does not rise above 50 degrees Celsius.

Electrical energy is converted into heat

Now you might ask yourself what the load resistance does with all the energy that is in such a power bank. The answer is simple: it converts it into heat and releases it into the environment. For this reason you can also find a thick cooling plate and a fan on my load resistor, which starts up when the temperature of the electronics exceeds a certain level.

There are certainly many applications for USB load resistors, such as a stress test of the electronics that supply the port, as well as testing USB power supplies that are to be tried out with different loads.

In my case, however, the aim is to completely discharge power banks for the tests and to use a USB multimeter to measure how much electrical energy they can emit in total. You could also do this by plugging in an iPad for charging, but unfortunately the larger power banks manage to fully charge the iPad without being empty themselves. That doesn't help me for the tests.

Ok, sometimes I also use the USB load resistors to measure the power at which power banks or USB power supplies switch off. This happens when you draw too much power and the internal electronics deactivate the outputs for safety reasons. To find this point, I connect the load resistor to the power supply unit or the power bank and then slowly increase the power until it switches off - or, in the case of particularly powerful power supplies, until an unpleasant smell of the circuit board is too hot.

This USB load resistor is my current favorite: It works reliably, cools itself down even with currents of 2 to 3 amps and has many hours of work under its belt - without failure.

In the meantime I have already bought some of these USB load resistors and also killed one or the other through these stress tests. Ultimately, however, there is only this one modelthat I can really recommend: 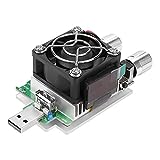 Unfortunately, it is impossible to name a manufacturer, as these devices come from China and the dealers change every few weeks. You can recognize it from the photos: There are two silver controls on the circuit board, plus a cooling plate and a small fan - see photo.

The other models that I used were all broken either by cold soldering points at the connections or by a defect in the electronics.

If I had to buy a new constant current load module right now, I probably would dieses hier because it can handle an enormous amount of power (up to 200 W - nonsensical with USB, but nice to have) and can therefore also be used for powerful power supplies. However, you have to like that the connections are provided with cable clips:

Although this load module has a USB-C input, it is not compatible with USB Power Delivery and only works with 5 volts.

Since I always have USB-C power supplies with me USB Power Delivery fluttering in, it would be nice to have a constant current load that can handle the higher voltages from USB PD and has a USB-C port.

There is though here a device, which can be connected with USB C and even supports Qualcomm QuickCharge 2.0 and 3.0, but unfortunately no Power Delivery, which would be the appropriate standard for Apple devices:

If you know a provider who offers a load resistor that supports the USB PD protocol, then I would be happy to receive a short comment.

The Atorch USB load module UD18L can be connected to the iPhone via Bluetooth and allows the values ​​to be monitored (Photo: AliExpress).

After the tip of my reader Raffi (thanks!), I did some research on AliExpress and I'm on the USB Tester "UD18L" encountered. This device is a combination of a USB multimeter and a USB load module. The special thing about it: According to the product description, it also supports USB Power Delivery with voltages of up to 20 volts and an output of 65 watts. You can't charge a thick MacBook Pro power supply with it, which is now 85 or 96 watts. Most of the USB C power supplies that I have tested so far can, however, be loaded to the limit.

I haven't ordered the device yet, but I think it will load into the shopping cart the next time I go to AliExpress. Then I can tell you how it fares in the practical test.