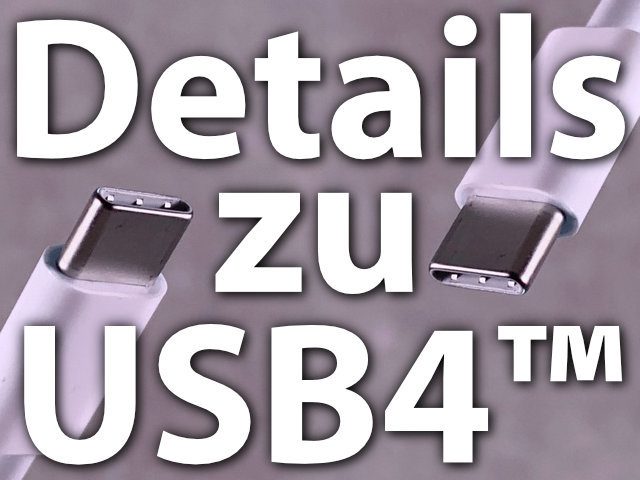 The specifications of USB 4 and USB4 were announced by the USB Implementers Forum (USB-IF). The extensive update of the Universal Serial Bus standard is based on existing standards such as USB 3.2 and USB 2.0, but extends them significantly. The USB4 architecture, it is officially called, is also based on the Thunderbolt protocol specifications from Intel, so that Thunderbolt 3 can also be counted among the fundamentals. What that means in detail and what points of criticism there are, I have compiled for you in the following.

USB 4, or more precisely: USB4, is the name of the new standard for USB-C connections based on Thunderbolt 3. You can find the specifications here.

As early as March 2019, there was information that the USB4 standard should come. You can find a corresponding message here in the blog at this point read up. Half a year later there are clear announcements from the USB-IF regarding specifications, compatibilities and technologies for the peripherals. The main points are as follows:

Why is the new standard needed?

Among other things, USB4 and USB 4 should help to improve communication and coordination of the connected devices. This includes the doubled maximum speed of the data flow to 40 Gbit / s, but also further adjustments to the USB standard, which are based on Thunderbolt 3.

A new protocol should also ensure that the display of video signals transmitted via the connection is optimally scaled for the target device. With this, the USB-IF addresses the growing role of the USB-C connection as a display port on host products. Or, to put it briefly: USB4 is a technology that integrates the advantages of Thunderbolt 3 on the USB-C port into the family of names.

Most of the sources on the topic only contain the information given above from the corresponding press release of the USB-IF (German / English). Among other things, heise online has dug a little deeper into the documents of the Implementers Forum. In a current Entry On the subject, a heading is therefore called “Hub des Horens” - there is also a graphic of the same, which is intended to explain the communication between host and device via the hub.

The text explains that complex hub structures are being introduced with USB4, as the conventional tree structure is retained for data exchange between the devices - while with Thunderbolt 3 devices could be operated in a chain. An interesting criticism that shows that a hub-internal router is necessary for data exchange. In addition, it is shown that with regard to the power supply via USB4, reference is only made to Power Delivery (USB-PD), which leaves some room for maneuver.