Vacuum bags for duvets and clothing - my pick of week 15 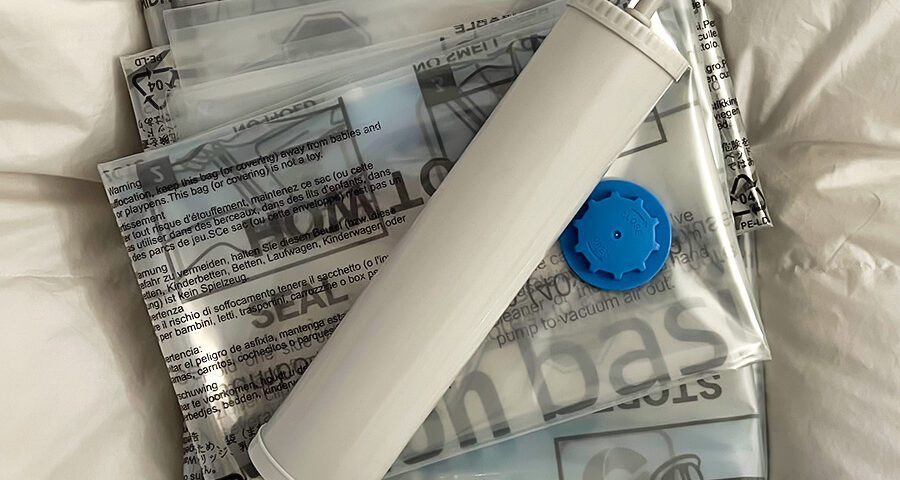 Today there is another pick of the week that has nothing to do with computers - but it's still no worse than the twenty-third power bank, which I could also recommend to you. So what is it about? This time it's about large vacuum bags that can be used to pack clothes or bed linen in a very space-saving manner.

I didn't actually buy the vacuum bags for clothes, but rather for my daughter's winter duvet. She got about the thickest down comforter I could find on Amazon this winter. If anyone wants to see the ceiling: thermal class extra warm; to be found here.

The duvet was undoubtedly a good choice as I have not once heard a complaint that my daughter was cold. But the disadvantage of the duvet is very clear: it takes up a lot of space if you want to stow it away in the spring.

As a result, I was looking for a solution to this problem, because the duvet had been in the way for weeks and slowly had to be removed. 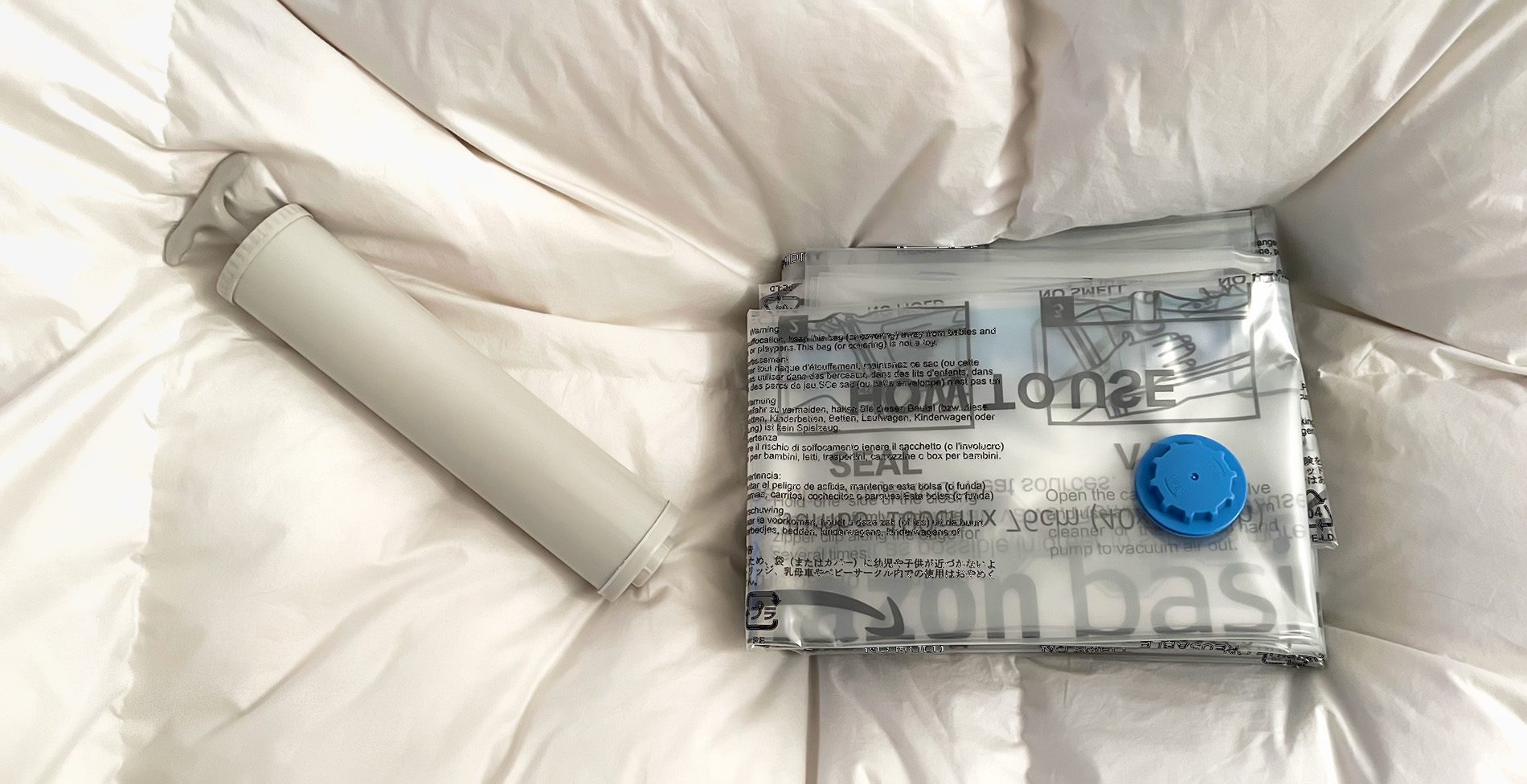 The AmazonBasics vacuum bags are my recommendation: they are sturdy, reusable and a good size (photos: Sir Apfelot).

The solution then came to me at some point: You simply pack the duvet in a vacuum bag that you use for space-saving transport of clothing. I just had to find a bag that was big enough.

Half an hour of browsing Amazon then led me to the AmazonBasics bags, which are suitable for the vacuum cleaner, but also have a pump in the package.

With the Amazon Basics bags there are the size "Jumbo", which was even enough for my daughter's giant blanket. But if you want to try other sizes, you can find one too Mixed set in sizes M, L and Jumbo. 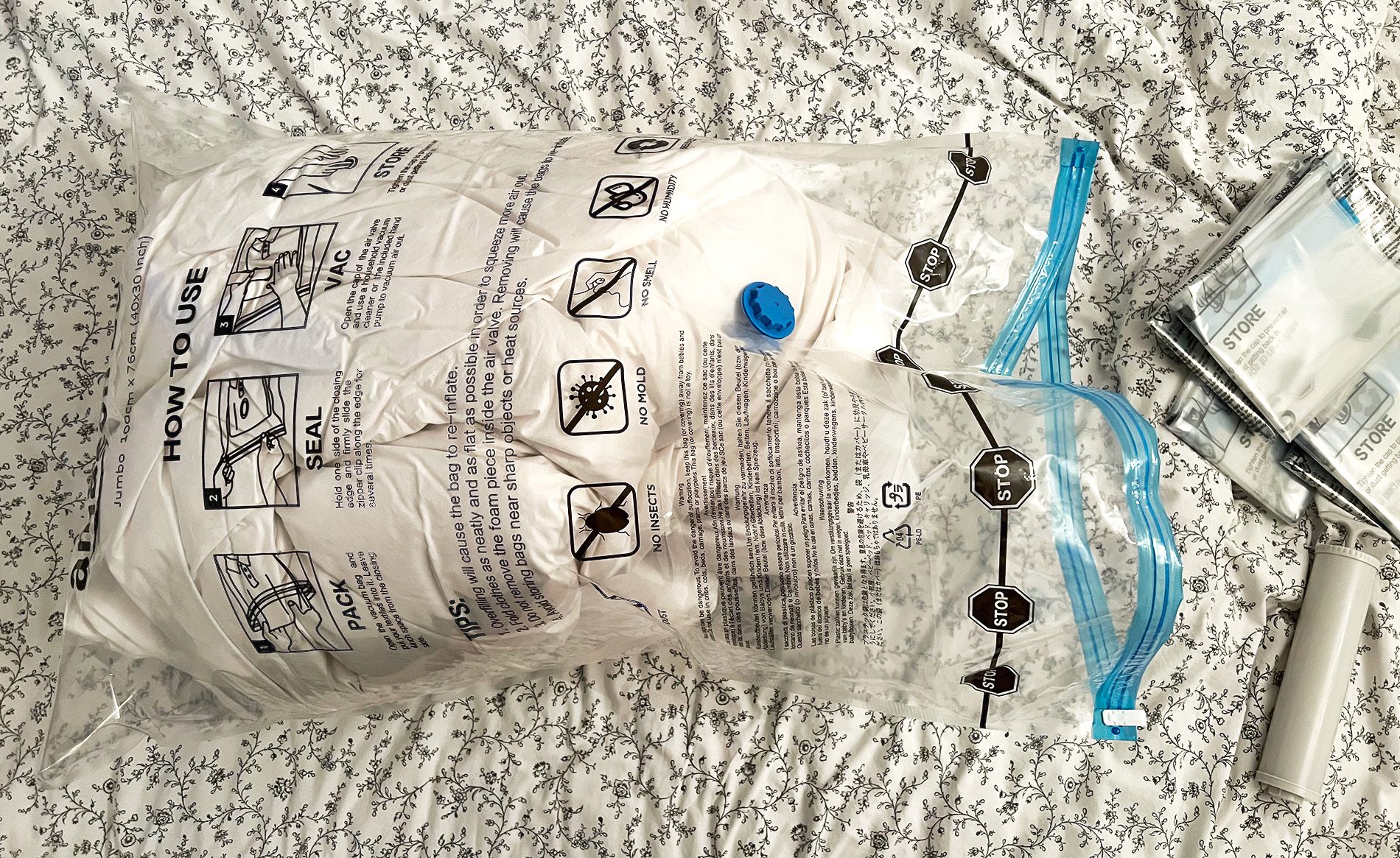 Getting the thick down comforter into the jumbo vacuum bag was a bit tricky, but once you do that the rest is relatively easy.

Sure, the vacuum bags from AmazonBasics are quite cheap, but most of the time I don't make sure that I find the cheapest products when making such purchases, I rather see which ones work best.

I've often read about bags from other manufacturers that they leak and the clothes in them gradually expand again, which of course doesn't exactly help if you put a duvet in a drawer and then after three months the drawer won't open anymore because a giant blanket has filled every cubic millimeter in it.

With the AmazonBasics vacuum bags, the reviews were all quite good and the pump was included for free, so you don’t have to rely on a vacuum cleaner.

You don't need the vacuum cleaner either, because you can do it as follows and then only have to pump a little: 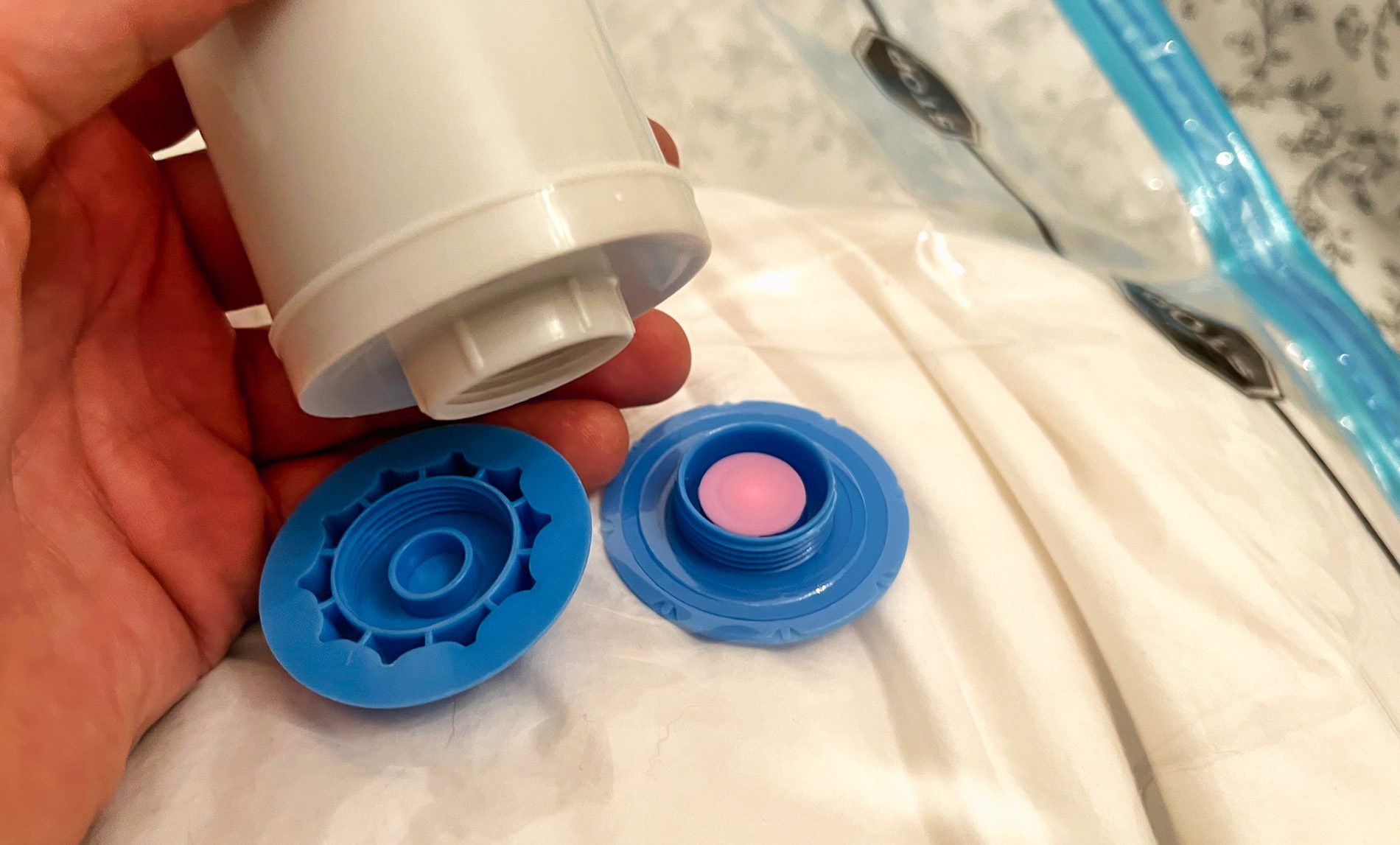 Here you can see the valve of the bags and the supplied air pump, which sucks rather than pumps. 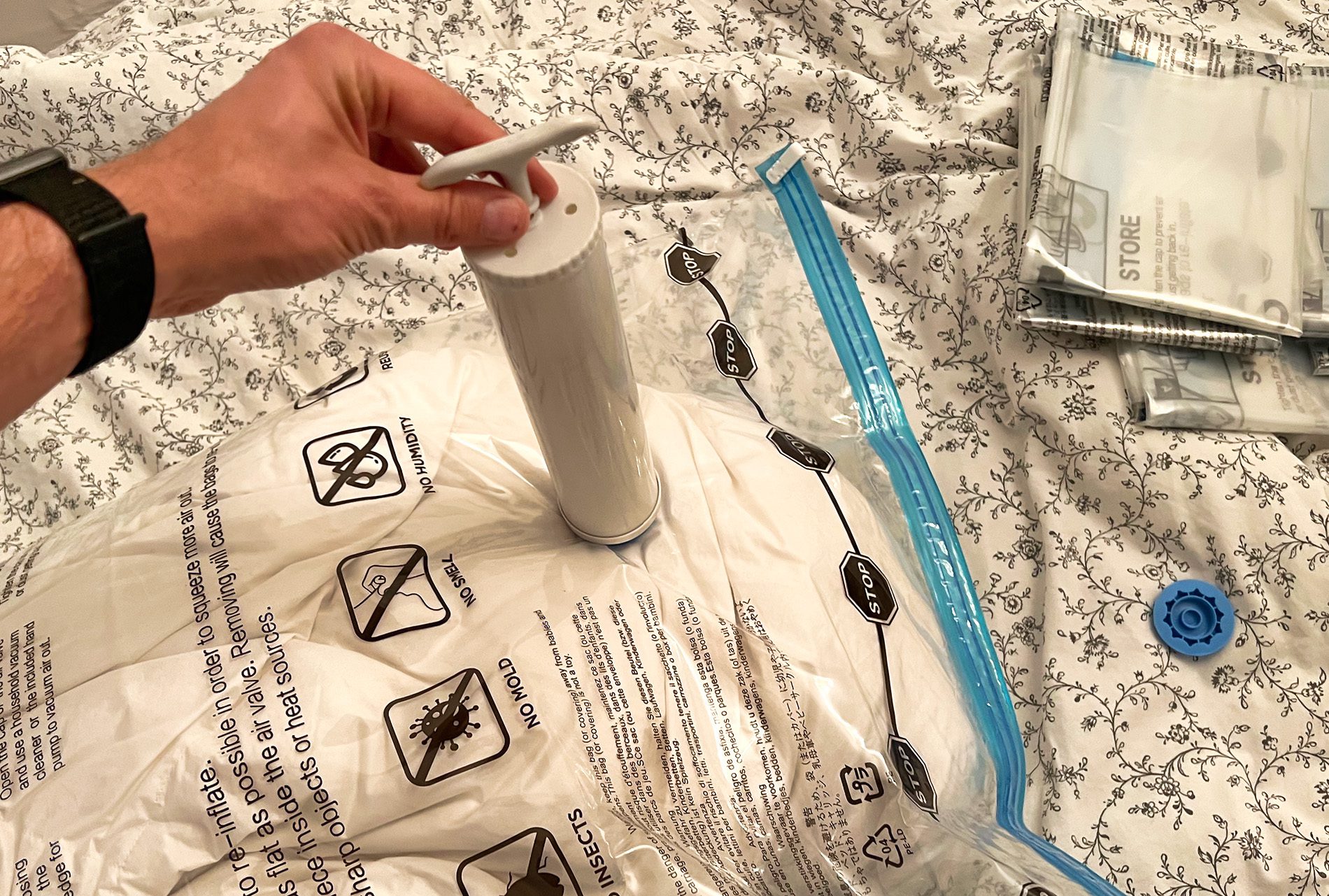 The supplied pump is built very cheaply, but that's totally ok, because it does its job and if it does break, every set of vacuum bags comes with a new one. 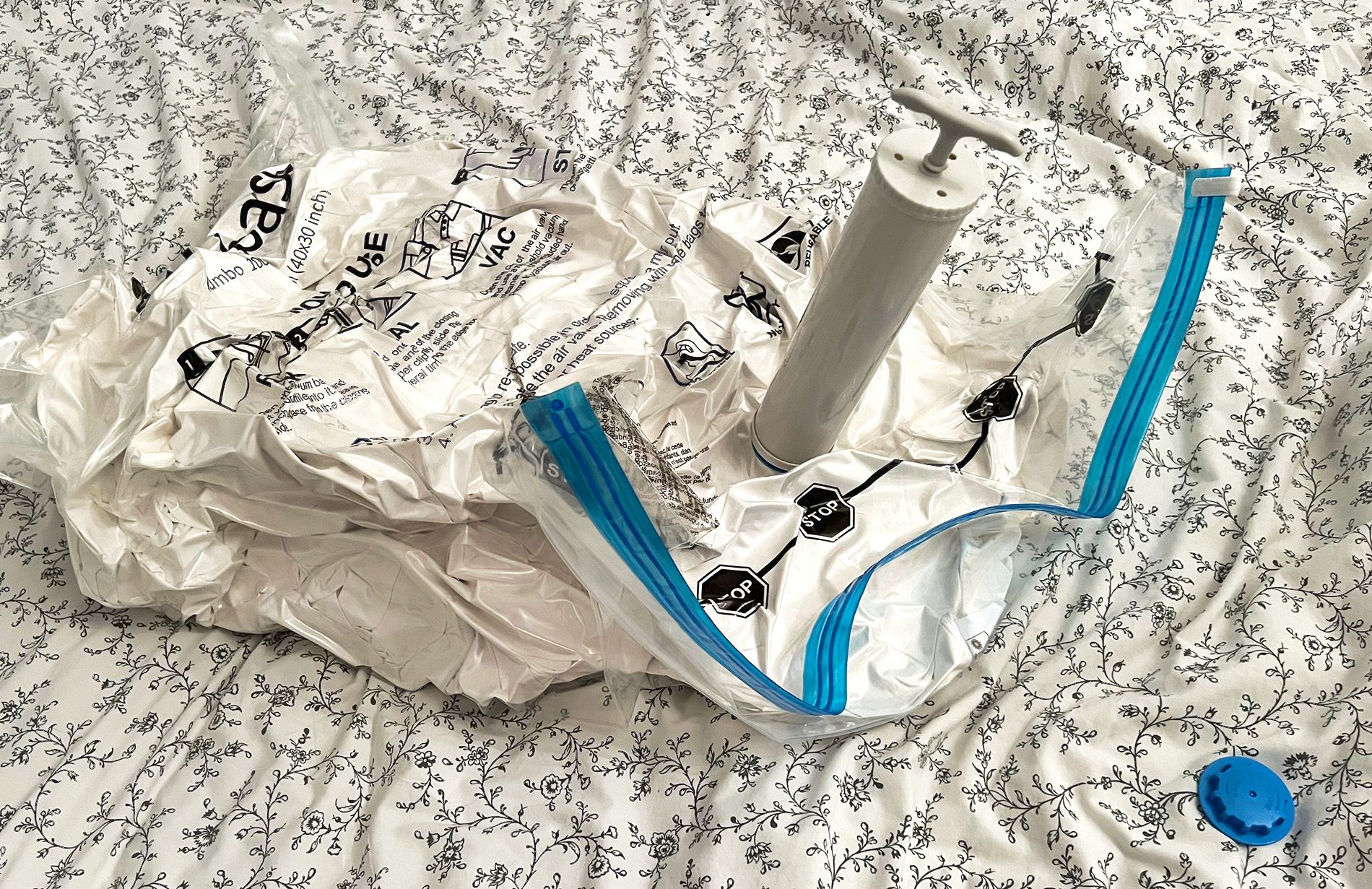 This is what it looks like when you have vacuumed a giant duvet. You can flatten it out a little more and pull it into shape, but then you have a small package that takes up a fraction of the space that the duvet would otherwise take up (photo: Sir Apfelot).

I am relatively sure that I will take these bags with me on vacation from now on. The bags are very helpful just to get the dirty laundry back home from vacation in a space-saving way.

I'm still unsure whether it's the right solution for down duvets, because the thumbs should usually be stored airy and open, because pressing them together can damage the thumbs and thus also reduce the thermal output. At the moment I'm leaving the blanket in the bag because I have no other storage option.

I hope that the tip is also helpful for you. If you already have experience with such vacuum bags, I would be happy to hear your comments.