VAU armored glass protective film with curved edges for iPhone 7 and 7 Plus - the very best protection?

I recently got one Protective film for the display of the new iPhone 7 or iPhone 7 Plus called Glass pro by the company VAU belongs. The innovative thing about this screen protector Glass pro should not only be the bulletproof glass character, but also the 3D design. The term “3D” is currently being used in an inflationary manner, so here it is a little more concrete: By VAU armored glass protective film the entire front of the iPhone 7 (Plus) is covered. This also includes the round corners, which are not covered with other protective films.

Data and facts about VAU Glas Pro for the iPhone

The screen protector from VAU was developed directly for the iPhone 7 and, in the sister model, for the iPhone 7 Plus. The armored glass protective film covers not only the flat part of the display, but the entire front of the device including the rounded areas of the glass. In this way, it is comprehensively protected from scratches and falls, as well as from breaks. The scratch and impact protection extends into the rounded corners of the front of the iPhone. 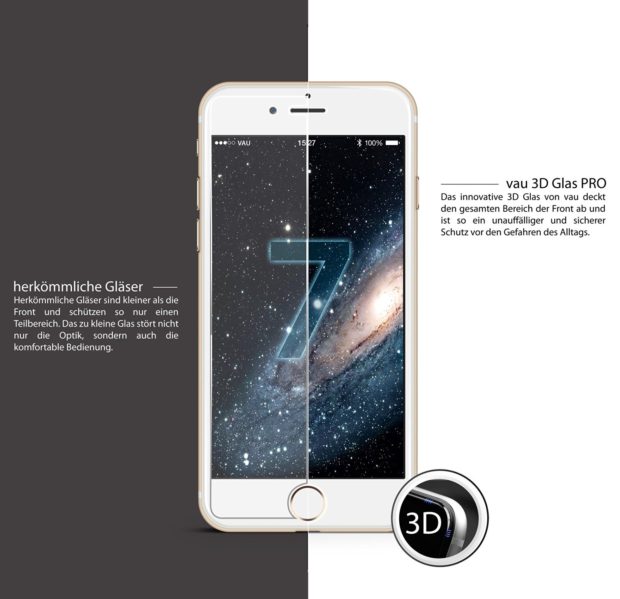 Here you can see the comparison between "conventional" protective films and the model from VAU. The infographic comes from the company itself and was posted on Amazon as a product image. (Click on the image to enlarge it) Image source: Amazon

Unrestricted use and all-round protection

The so-called RFLX coating of the Glass pro Protective film is supposed to guarantee that the iPhone 7 can be operated as before (incl. 3D Touch) and that the colors of the retina display are also reproduced unaltered. The small disadvantage that arises with every protective film: only the front of the device is protected. That's why I recommend another one to protect the back and the edges Phone case for the iPhone 7 to add. This is how you create all-round protection.