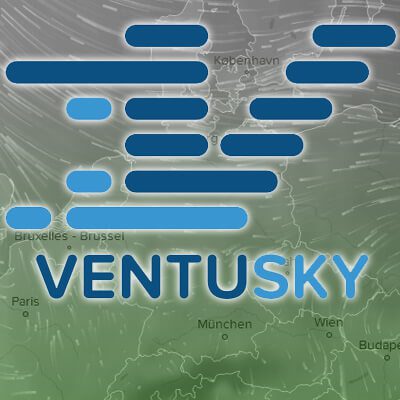 Ventusky is a website of the Czech Meteorological Society InMeteo, which shows weather conditions, temperatures, wind, precipitation, air pressure and many other data animated in real time with its website. Data can be called up worldwide - from any place on earth for any place on earth. Ventusky is made up of the word Ventus (Latin for "wind") and Sky (English for "sky"). Ventusky not only shows the wind, but the entire weather - so that you not only have a forecast, but also understand the meteorological relationships.

Ventusky screenshot from the stationary computer - you see the visualization of the weather with many details and for the whole world. (February 7, 2017; click to enlarge)

Ventusky works on a desktop PC, Mac, iMac, MacBook, MacBook Pro and so on as well as on iOS devices such as iPhone and iPad and Android smartphones and tablets. Whether you get along better with the vertical or horizontal view is certainly a matter of taste. The Ventusky website was designed in such a way that it is easier to use mobile than on large monitors.

Including the current day, Ventusky can provide weather forecasts for a total of 10 days. The weather maps for the current day and time are also interesting. The following information can be called up at Ventusky with a mouse click or touch on the screen: temperature, precipitation, cloud cover, wind and gusts of wind, air pressure, thunderstorms, snow cover and the zero degree limit. But not only for us landlubbers. Anyone who is out at sea, planning an excursion by ship or a sailing trip can call up this as well as the current (or upcoming) waves and wave strengths at Ventusky.

The waves of the seas surrounding Europe on the Ventusky weather map. (February 7, 2017)

InMeteo now also has a Ventusky weather map app that you can download onto your mobile iOS or Android device. So you can, adapted directly to your iPhone, see weather data from temperatures and precipitation to wind strengths and the cloud cover to air pressure and thunderstorm zones. The app is even optimized for display under iOS 11 on the iPhone X. The only disadvantage compared to the website, which you can still use as a web app: the iOS app costs EUR 3,49. If you have an Android device, you can find it in the Google Play Store the download of the corresponding application with in-app purchases.

What do you say to Ventusky?

How do you find the visualization of the weather, meteorological phenomena and the waves on a worldwide map without an app and download? I am enthusiastic about Ventusky and the possibilities that are available on both the desktop and mobile. Please leave a comment with your opinion :)