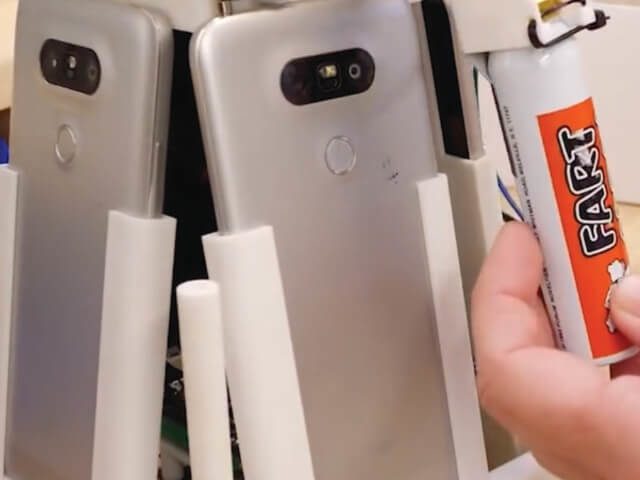 Just in time for the Christmas season, when many parcels are sent and delivered, space engineer Mark Rober tied a few parcels last year that he laid out on his porch for parcel thieves. In a video that went viral and garnered a lot of approval and no less criticism, he shows the structure of his “glitter fart spray bomb” and the videos he made of the thieves with it. In the following I have included the video for you and put some additional information and thoughts on it. What do you think of the matter? Feel free to leave a comment!

Equipped with a glitter atomizer, automatic fart spray dispenser and four camera cell phones, this device is supposed to be a lesson to thieves.

In the video Package Thief vs. Glitter bomb trap by Mark Rober, he initially explains the problem that parcels have been stolen from his porch. Then he proceeds to his idea of ​​giving the thieves a surprise when they are unpacking the stolen goods. For weeks he not only created his own circuit boards and codes, but also a device with a glitter atomizer and automatic fart spray dispensing. Oh yes, there are also four smartphones in it, which start video recording and transmission after motion detection in order to record everything. The alleged HomePod package can also be located via GPS.

With YouTube videos, it is always a good idea to read the video description carefully as well. In this particular case, you can read that with the help of a friend of Mark Rober's, some legitimate criticism has come about. It is shown that the content creator, in order to be able to collect more video material, has given a friend of a friend packages with said device. Since he received a financial allowance for his efforts (including tracking down and retrieving the parcels), he again hired friends to act as thieves. Because of this, Mark Rober admits in the video description that the reactions from 6:26 to 7:59 are not real.

Thoughts on the video and application in Germany

First and foremost, two crucial things stand out in the surveillance camera recordings, which show the thieves stealing parcels. Firstly, the public space is monitored with the footpath and the street, which you should refrain from in Germany. So if you do a surveillance camera or a wildlife camera on your house, then make sure that you only covers your own property. Second, it is noticeable that the video creator could have simply built a fence with a fraction of the time and money invested in his glitter fart spray bomb. I think that - not only in Germany - no normal mortal also has enough resources to take action against thieves in the manner shown. Therefore the video is simply entertainment and does not show a real solution: D