While looking for an iPhone tripod, a smartphone gimbal and similar accessories for film projects, I came across a tripod head that had very good reviews. The ingenious holder can be attached to the tripod using a 1/4 "or 3/8" screw and used on the GorillaPod. For Prime members there is not only fast free shipping, even a discount as standard. A discount voucher can also be activated on the product page. If 31,16 euros are too much for you, you can order the slimmed-down model for 6,36 euros on the same page. This link takes you directly to the offer.

Here I present you the VIJIM smartphone tripod head with the best ratings and discount on Amazon. The mobile phone holder for the tripod can be used with a 1/4 "or 3/8" screw and provides protection for the smartphone housing.

Not only can the smartphone tripod head offered by VIJIM be attached using various threads. It can also be quickly rotated from portrait to landscape format. The option of rotating the smartphone holder 360 ° can be used for this. This works via a ball-and-socket joint which, in addition to turning, also allows tilting by up to 90 °. Different camera angles can therefore be implemented for the optimal recording of a video or for the desired visual language in the film, even if you want to implement a film project as an individual. The cheaper version can only be turned, but not tilted, for just under a fifth of the price. 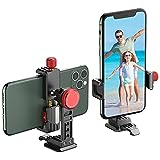 So far only 5-star ratings for the "large" version

Purchase recommendations, praise for the ease of use, highlighting the good workmanship - you will find this and much more in the reviews and ratings of the smartphone holder for the tripod. So far all have 5 out of 5 stars. Every text from customers also says “Verified Purchase”, and many even provide photos of the product. Therefore, one can assume that these are reviews from real buyers and not fakes. If this convinces you and you want to use the VIJIM tripod head for iPhone and Co., you may need a tripod, a gimbal or a selfie stick for it. Here are a few suggestions:

iPhone Videos: So you can set the resolution and fps value