What does TL; DR mean? 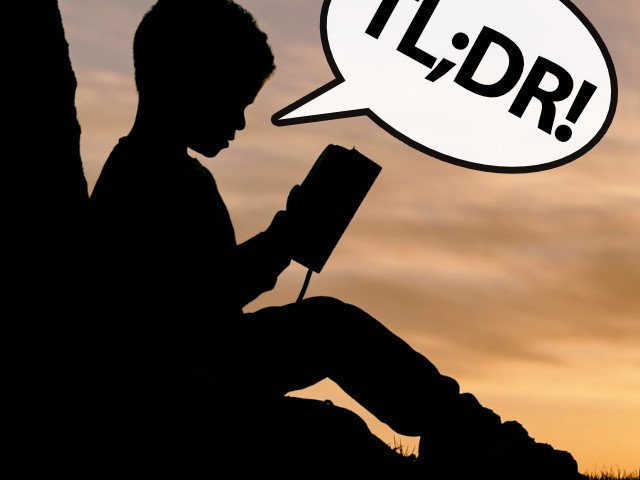 What does the abbreviation TL; DR stand for? Why does this abbreviation keep appearing in forums, on Facebook, in website comments or directly in blog posts? Most likely because the text commented or summarized with it is (felt) too long. Because TL; DR stands for “Too long; didn't read ”, so“ too long, not read ”. So if someone writes an article that is too long, a comment that is too long, or goes too far in a social media post, this comment from the internet jargon will come up sooner or later.

What does TL; DR mean? It says: Too long, didn't read. Translated, this means: too long, not read. If you get the abbreviation as an answer, you should probably keep it shorter;)

If someone writes his opinion from his soul, this can end in an essay of several pages. “Don't write novels!” Comments one or the other. “Get to the point!” Is another, more classic answer to this. But if you want to explicitly indicate that you have no time or inclination for long texts, you can also use a TL; DR to make this clear.

But attention: One can quickly be seen as a troll (= deliberately provocative internet joker). Because if you take the trouble to write a long text, you could get angry if there is only a TL; DR comment underneath. That equates to (subjectively) a “Well”, a “Nobody interests” or “Your opinion is worth nothing”.

TL; DR as an introduction to a summary

However, users in their forum entries, bloggers and copywriters in their posts and other Internet users have long been using the TL; DR term as a preventive measure. Here at Sir Apfelot, for example, I sometimes write “TL; DR” under the introduction and then give the link to the app described or the product presented. In this way, everyone who already gets enough information from the headline and introduction can move on to the main thing.

Two different trends can currently be seen on the Internet: service for users and service for your own site. Because z. B. At Sir Apfelot you get ad-free guides, instructions, app presentations and product reviews; sometimes with the named abbreviation. Many other sites use clickbait, articles that are far too long with the main information in the last paragraph and loads of advertising; all to make maximum profit.

As long as there has been the Internet and the exchange of people via text displayed on screens, there have been weird abbreviations, new words and slang. Not just a single jargon has long since developed on the Internet; one can even speak of several languages ​​that are constantly being reformed.

A mixture of German and English, the adaptation of the spelling to the way of speaking, and the number "1" instead of one, one or one ... everything is included. Slowly but surely it becomes confusing; and depending on the platform such as Facebook, Twitter, Instagram, 9GAG or forums, you will find other “dialects”. If you can't quite keep up with that, you don't need to be ashamed.

Books, encyclopedias and nerd literature on the subject

As early as 1996 there were lexicons for those who could not find their way around the Internet language. So if you wanted to know what TL; DR or other terms (such as today's FAQ) mean, you could, for example, use "Chat slang. Internet language lexicon“Help by Oliver Rosenbaum.

If you're interested in nerd literature in general or if you're trying to understand this weird, semi-digital culture, you'll find more great books here on the blog. For example in this book collection, With The GameConsole und mit The Secret History of Mac Gaming. Do you still have questions about internet jargon or recommendations for nerdy books? Then leave a comment;)