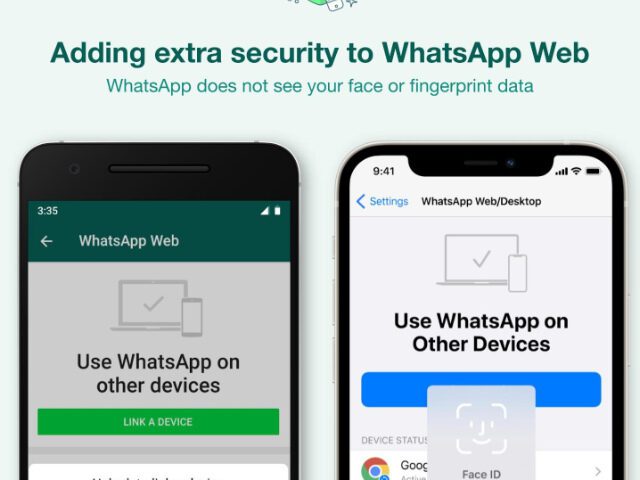 As various sources report, the WhatsApp messenger's browser tool called "Web WhatsApp“Soon only work with querying biometric security data. But don't worry, you don't have to share your fingerprints or your face scan with the Facebook group on your Apple iPhone or Android smartphone. Before the QR code displayed on the website can be scanned, access from the network only needs to be confirmed using local on-board means on the smartphone. In the case of Apple devices, this is Touch ID (fingerprint) or Face ID (face). Both are only processed on the device itself.

WhatsApp Web will soon only be usable with fingerprint / Touch ID or face scan / Face ID. Unlocking with biometric data should be more secure. The data is only processed locally.

Use WhatsApp in the computer web browser with a security query

WhatsApp Web can be called up directly in the browser as a web tool. An individual QR code is then displayed. This must be scanned in via the app settings on the smartphone. The current chats, groups and status messages from users are then also displayed on the Mac or PC. Currently, this is still running without a security query, which may lead to misuse of the service - even if only to a limited extent, as the smartphone and access to the app are required.

However, for example, The Verge (English) and Netzwelt (German) of the fact that the procedure should change "soon" or "now". At Netzwelt, one refers to you official tweet from the WhatsApp Twitter account. This was dropped this morning at 9:00 a.m. It says (freely translated):

Today we are starting the rollout of a new security function for WhatsApp web and desktop: unlocking with face and fingerprint when linking devices.
WhatsApp doesn't see your face or your fingerprint data.
Chats only for yours ??.

How soon is the security update coming?

That's a good question. I have just activated WhatsApp Web for a test using the iPhone in the Safari browser on the MacBook Pro and there was no security query via Face ID. It is not entirely clear how quickly the new feature will be rolled out. It will probably reach all users within the next few days. By the way: If you want to say goodbye to the WhatsApp app from the Facebook group due to new terms and conditions, then you may be looking for suitable alternatives for chats and groups. Here I have summarized some information about Signal, Telegram and Threema for you.