The UniConverter from Wondershare offers the possibility to download videos from various Internet sites, to convert video files into other formats and to make them available on different platforms. Formats from camcorders, digital cameras and other special formats can also be selected as a source or destination. The trial version of UniConverter can be downloaded for free. The full version costs either from 39,99 EUR with subscription or 59,99 EUR with the lifelong license. However, there is still a Christmas promotion until December 31.12.2019, 30, where you can save XNUMX%. You can find details at the bottom;)

Wondershare's UniConverter app can convert videos in a number of formats. But also video downloading, burning DVDs, editing videos, creating GIFs, creating VR videos, screen recording and more are possible with the video converter! That justifies the price of 59,99 € - or 41,99 € in the current promotion;)

UniConverter for Mac and PC - functions at a glance

The Wondershare UniConverter is available for the Apple Mac from Mac OS X 10.7; macOS 10.15 Catalina is also supported. The software for converting videos runs on the PC under Windows XP, Vista, 7, 8 and 10. In summary, the app offers you the following functions for video management on the computer:

Direct to the provider: View the website for the app here

Converting videos on Mac from one format to another is individually possible with UniConverter. i.e. you can keep the original resolution or set a different one (e.g. from 4K to 1080p to save storage space). You can also load DVDs, ISO and IFO files to convert them. Supported formats are also: MP4, MOV, MKV, M4V, AVI, HEVC MP4, HEVC MKV, WMV, DivX, MXV, MPEG-1, MPEG-2, DV, VOB, 3GP, 3G2, OGV, WebM, ASF, Presets for YouTube, Facebook and Vimeo, FLV, F4V, SWF, TS, TRP and XVID

In order to edit downloaded, converted or already existing videos in the target format, the UniConverter offers the possibility of editing. Of course, the software does not have as large a range of functions as professional editing or effects programs. Videos can be cropped, changed in aspect ratio, rotated, adjusted in terms of brightness, contrast and saturation, optically changed with filters and provided with watermarks and subtitles. That's a decent deal for a video converter! 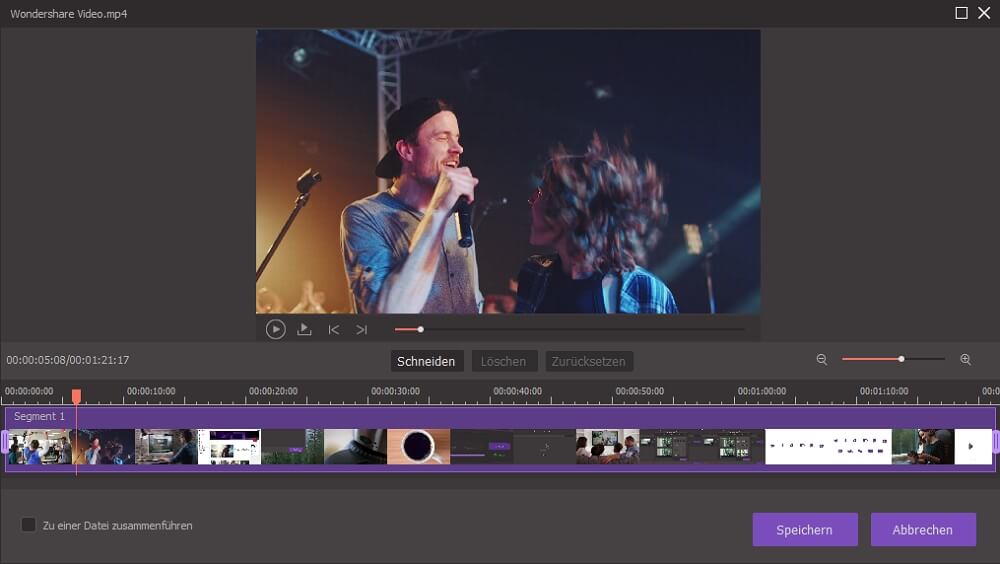 In addition to converting videos on a Mac, downloading videos is probably one of the software's most important functions. In any case, a great addition that you don't get with every converter. To download videos you just have to paste the video URL (copied from the address bar of the browser or from the "Share" function) in the corresponding tab of the program. Turbo mode can even be selected for faster downloads. According to Wondershare, the UniConverter can save videos from over 10.000 websites.

Wondershare UniConverter can also download videos from the Internet - from over 10.000 websites.

I think this point is self-explanatory;) It is probably only important to mention that not only physical DVDs can be burned, but also image files in ISO format or DVD folders. Otherwise I would like to recommend a couple of burners for Mac, iMac and MacBook (also with USB-C): SuperDrive with adapter, Blu-ray burner with USB-C, various types of external DVD drives.

Transferring videos from Mac or PC to mobile devices with the UniConverter works when the source and target are connected via USB cable. A lot of devices are supported; from Apple are the iPhone, iPad and iPod Touch with iOS 5 or newer. In the area of ​​Android devices, these are smartphones and tablets with Android 2.2 or newer. These minimum requirements should currently really be met by all devices that can still be used: D

Downloaded, converted and edited videos can be transferred to iOS and Android devices; even if they have old operating systems ...

In the “Toolbox” tab there are a number of other functions and options that go beyond just converting videos on Mac and PC. Here is a short summary of the current ten other possible uses of the software (see picture for details): Convert images, create GIFs, repair video metadata, compress videos, convert videos to VR format, burn CD, copy DVD, rip CD, Desktop + Record audio, broadcast to TV.

With the Toolbox, this video converter app for Mac and PC goes even more than its actual function! A great scope, which I would not have expected given the name!

With the scope of services shown above, which goes far beyond converting videos into other formats, the regular price of EUR 59,99 is quite reasonable. After all, the package includes screen recording, VR conversion, CD and DVD functions, a downloader for web videos and much more. And the whole thing is currently and until December 31.12.2019, XNUMX cheaper! On this promotional page of the provider there's the UniConverter with a lifetime license for only 41,99 EUR. You will also find other Wondershare apps there, also at a discount, as well as free test versions. But that's not all: There's a competition on top of that;) 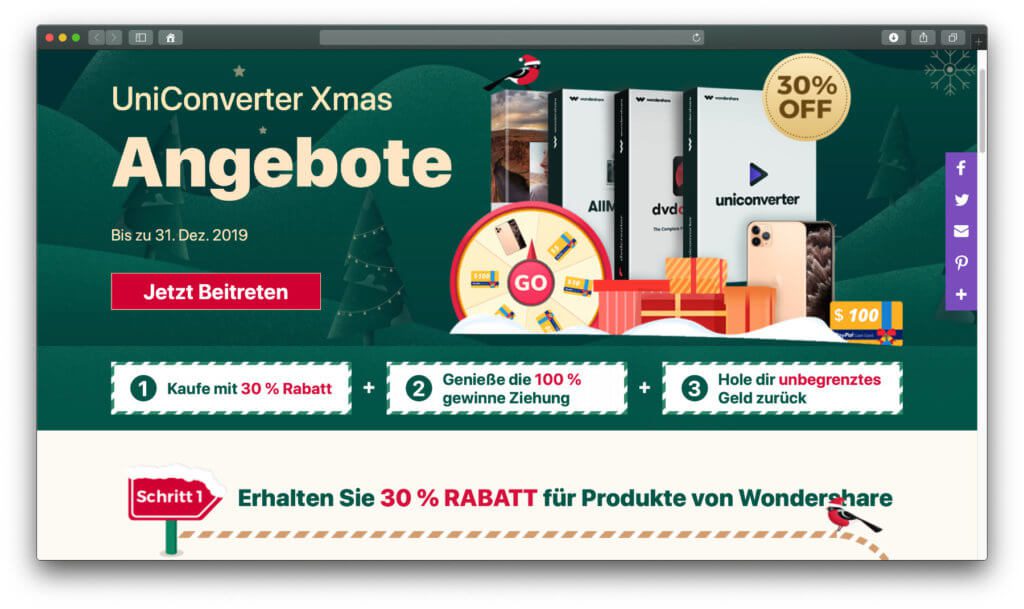 Buy Wondershare software 30% cheaper and take part in a competition - you can do that until December 31.12.2019, XNUMX!