Tonight Apple opened WWDC22 with a keynote. The presentation not only brought new things for iOS, iPadOS, watchOS and macOS. A few rumors have also been confirmed - for example, that there will soon be freely resizable app windows on the iPad. In addition, there is the "M2" as the second generation of Apple Silicon. With this, a model of the MacBook Air and the MacBook Pro have been presented again. You can find out more about the new systems, the new M2 chip and the new laptops in this issue Apple WWDC22 Keynote Summary. More details will follow in the coming days. 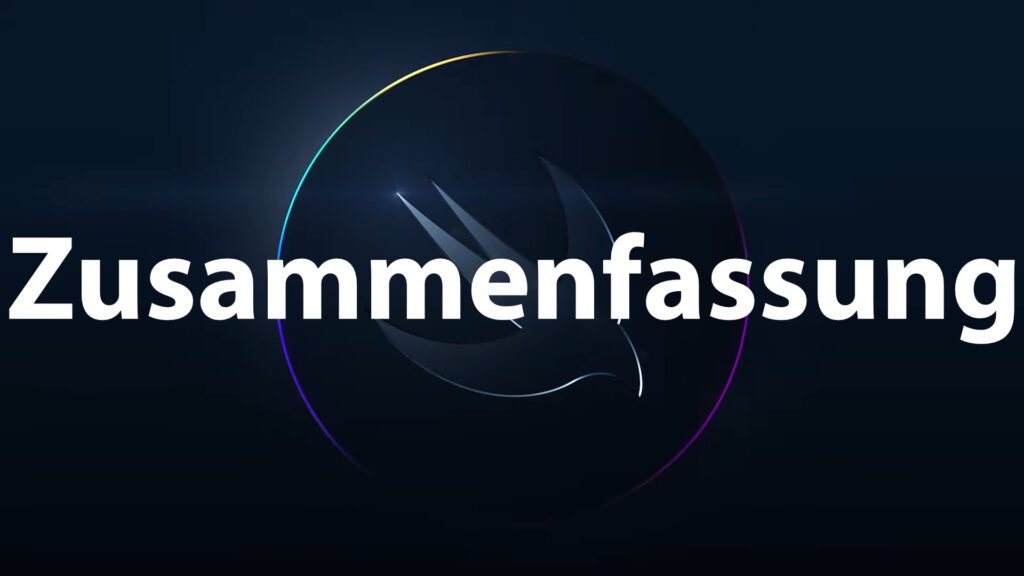 Traditionally, this pre-recorded keynote was also opened by Apple CEO Tim Cook. He not only pointed out the new Developer Center, which is intended to be a contact point for developers across from Apple Park. But also on the meanwhile 17 developer academies, which are operated worldwide. With the on-site facilities as well as with the digital tools and last but not least with the WWDC 2022, the 34 million developers who code for Apple platforms are to be supported. After this introduction, we went to the first big topic: iOS.

The new iPhone operating system iOS 16 brings several improvements and innovations. In order not to overwhelm the following with expansive continuous text, I present the individual features shown in a list: 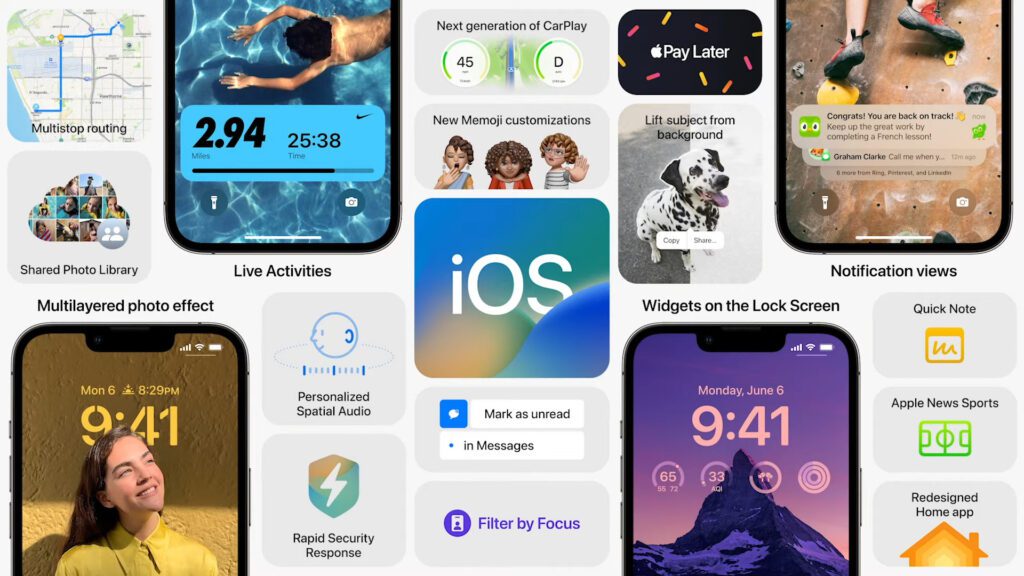 The safety check is used e.g. B. under iOS 16 to check and, if necessary, reset the sharing of the location, app and website access and other data. As part of the WWDC22 keynote, this feature was also and especially presented to victims of abusive relationships. With Safety Check, it is possible to determine at a glance who is receiving or has access to data. Violent individuals can be quickly removed from the list so that one can escape to safety without fear of being followed. With the "Emergency Reset" you can reset all releases quickly and easily so that you don't have to search through all the settings. More on the subject: What is stalker ware? 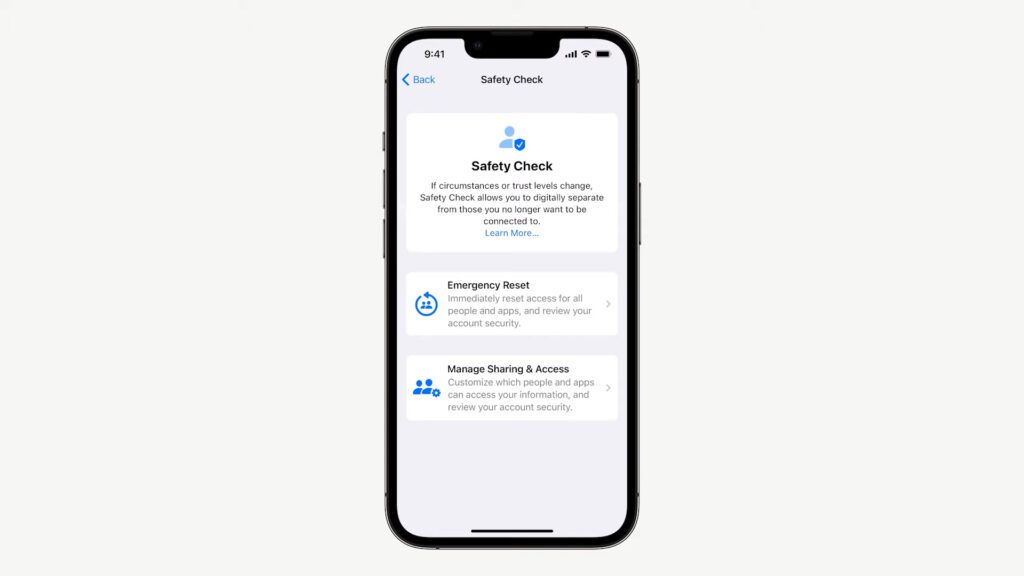 Matter was presented more than a year ago as a new, cross-manufacturer and cross-platform standard for the smart home: Matter - Smart Home Standard of the Connectivity Standards Alliance (CSA). Now Apple has gone into this again in the WWDC22 keynote with regard to HomeKit. Attention was paid to the safety of all components. Also featured was the Home app on iOS 16, redesigned to keep an eye on the home at a glance. There is e.g. B. New categories like "Lights", "Security", "Climate" and so on. Up to four cameras can also be displayed directly. In addition to iOS, this will also be possible in iPadOS and macOS. 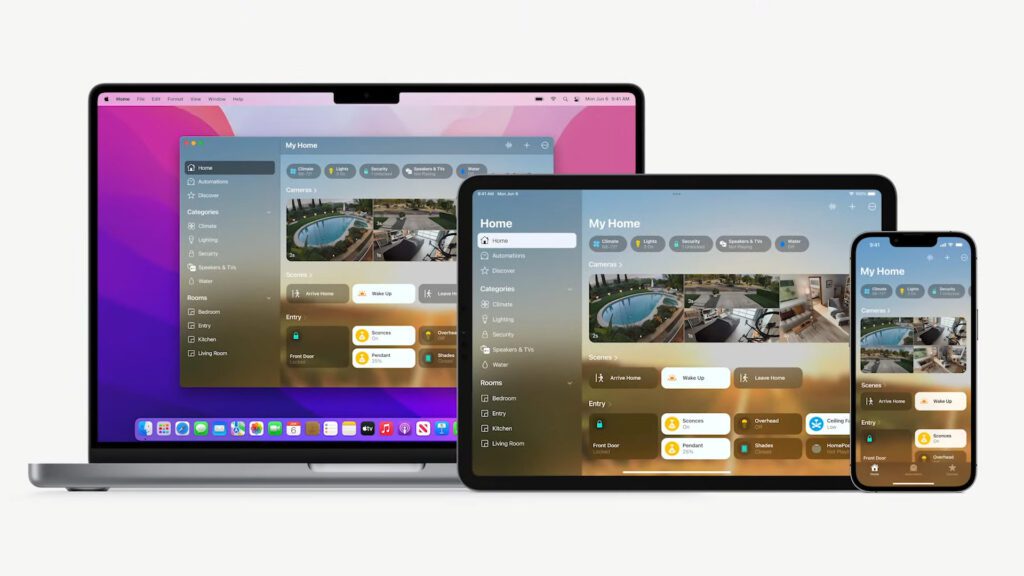 After the operating system for the iPhone, it was about the system for the Apple Watch. watchOS 9 will bring new watch faces again: Space, Lunar, Play Time and Metropolitan. There will also be new banner notifications and a revised Siri UI. The podcast app on the Apple Watch will include new search functions and a version for children. There are also new APIs for developers for sharing, photo and telephony functions.

With regard to physical activity, there should of course be a few improvements again. For watchOS 9, new data for jogging was presented, which affects arm and body movement. But the pulse also gets more attention, for example with phases for performance and quieter training during the workout. You can still put together your own workouts - with exercises and individual repetitions. There's also a new multisport workout for triathlon with automatic recognition of running, swimming and cycling.

As of watchOS 9, the sleep app also registers sleep phases and provides information about them. In order to recognize them as precisely as possible, the software was trained with the largest test group for a wearable, it said. In addition to the time, exercise and sleep, it was also about heart diseases and medication. Cardiac arrhythmias are now permanently detected and saved in a history, among other things to read trends. For example, it can be recognized when and under what circumstances the heart problems arise. There are planning and reminder functions for medicines as well as information about interactions with other medicines, alcohol and other substances. 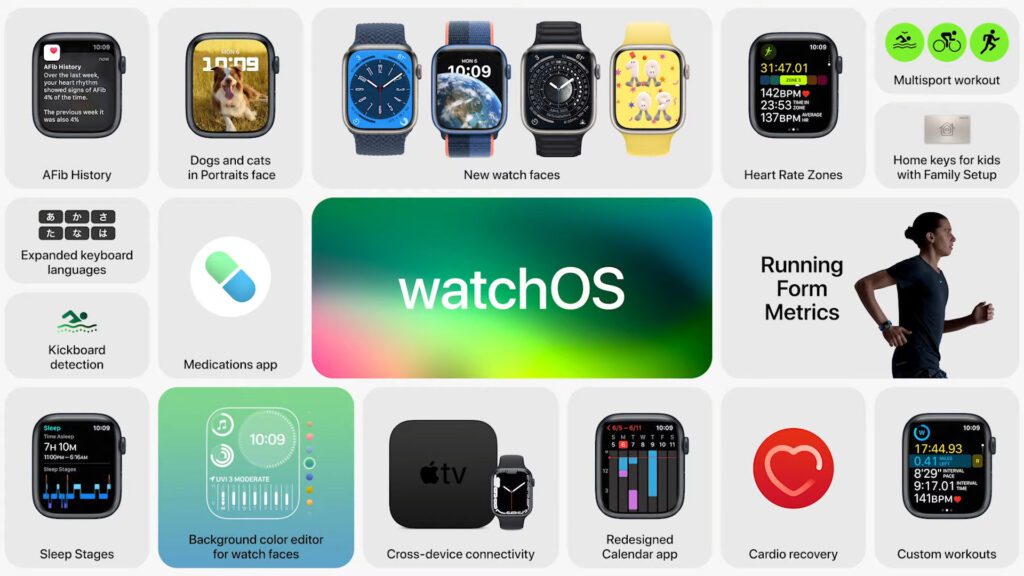 The name "Mammoth" for macOS 13 has not been confirmed. The upcoming Mac operating system will be called "Ventura". One of the most impressive of the new features is called Internship Manager. This can be done in control center activate and ensures that open windows are grouped on the left, while the active window or multiple active windows are shown in the center. Open windows of an app can be selected or changed by simply clicking on them. A click on the desktop in the background shows it so that files and folders can be selected on it. 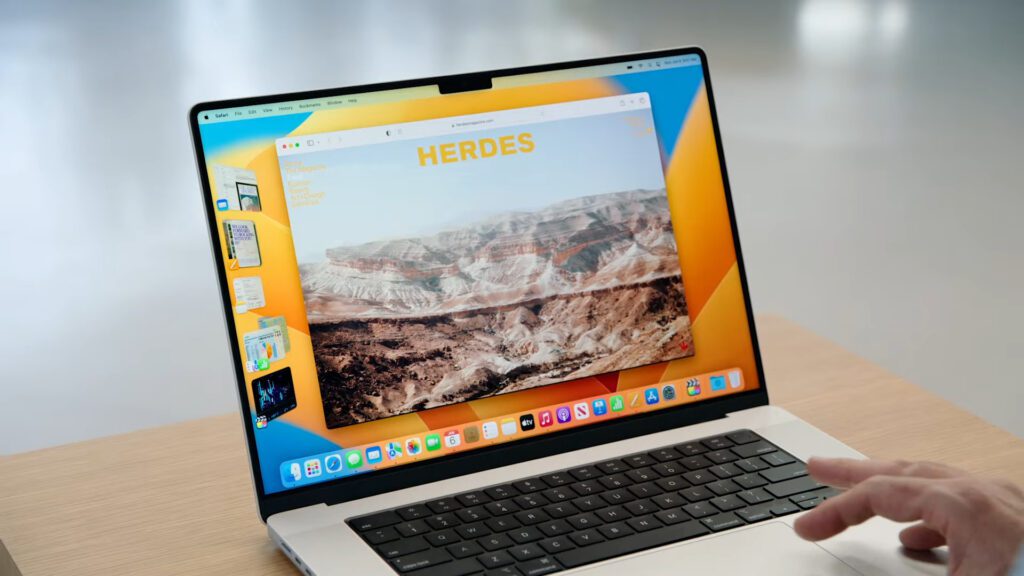 New content and functions are also coming to Spotlight, Mail, Safari and Co. Here is a list of other innovations that we can expect from macOS 13 Ventura: 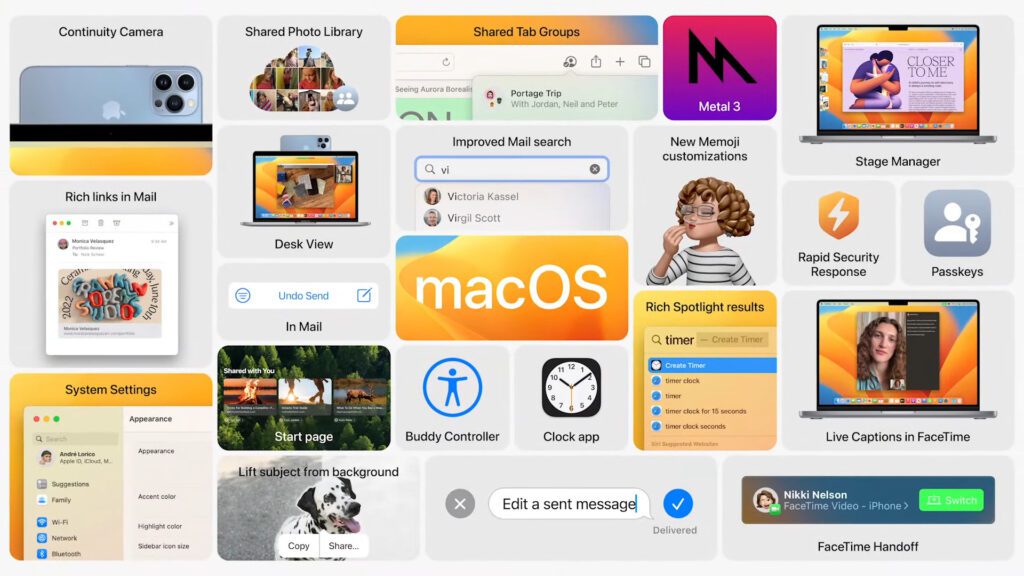 There are several apps that already allow you to use your iPhone as a webcam on your Mac or PC (DroidCam / EpocCam). mediation Camera Continuity However, it is now possible to use the iPhone as a webcam on the Mac using on-board tools. But not only one of the two to three lenses on the back of the smartphone plays a role. In addition to transferring the face (including the center stage), it is also possible to transfer the desktop / keyboard. The ultra wide-angle camera is used for this. Appropriate holders for the MacBook, the iMac or monitors will soon be offered by Belkin. 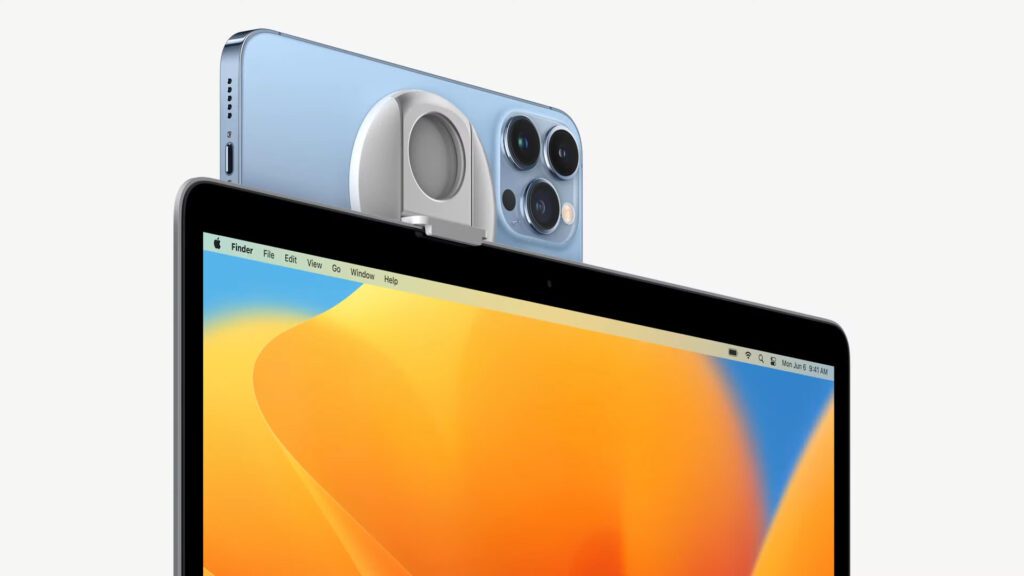 iPadOS 16 combines several new features from iOS 16 and macOS 13. One of the most important new functions, which was already rumored to be in circulation, is the use of app windows in freely adjustable sizes – the same as described above also applies here Internship Manager for use. On the iPad, too, the apps that are still open are grouped on the left next to the active windows. At the same time, the dock is displayed.

New features for collaborating with other people are also coming to the iPad. as Collaboration the joint, simultaneous editing of files via the share button was announced. Not only is the file shared for local use, but team members are granted access to their own file. With free form a kind of digital whiteboard was presented on which brainstorming can be carried out together and at the same time. Free Form will also be available on iOS and macOS.

The new Metal advantages that I described above for macOS are also implemented on the iPad. There are also new performance features and options. Here are a few examples for the pro users and developers among you: 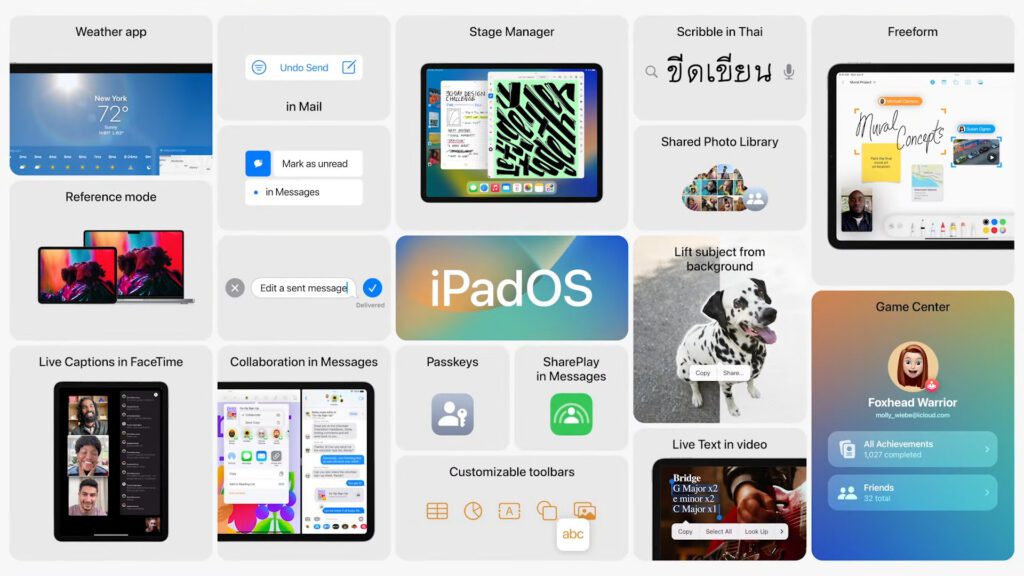 When can the new systems be used?

And in addition to new operating systems, hardware was actually presented today. As part of the WWDC22 keynote, Apple presented the new M2 chip. This was also extensively compared with the M1 chip and the current PC performance. This week I will go into more detail about the M2 chip and the comparison with the M1 chip. Here's just this much: up to 24 GB of RAM is supported, the Neural Engine is said to be 40% faster, the CPU has eight cores (18% faster) and the GPU has 10 cores (35% faster). The memory bandwidth is 100 GB/s. 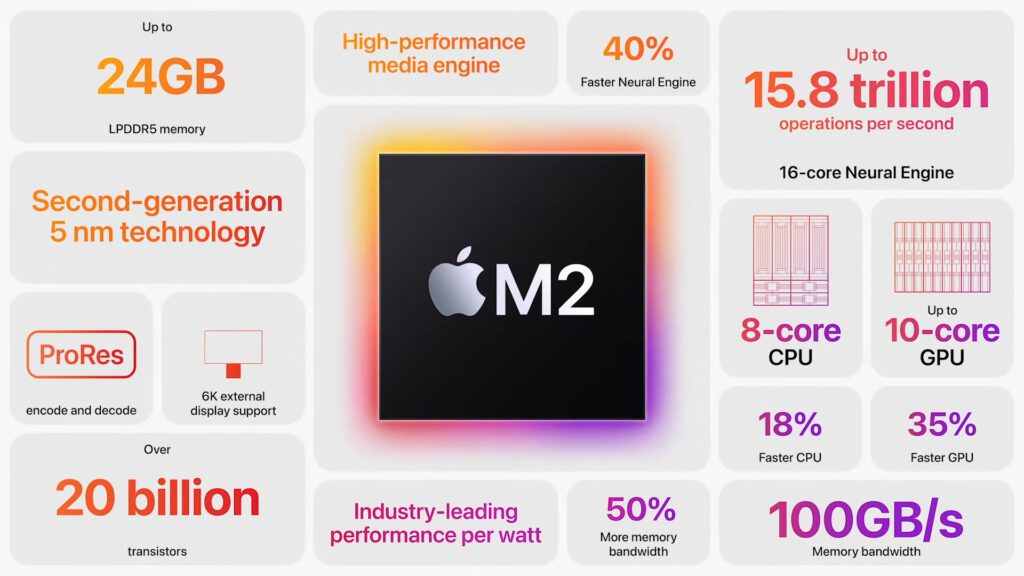 There will also be more detailed information on the new MacBook Pro with M2 chip, 13-inch display and Touch Bar in another article. It comes with up to 2 TB of storage and up to 20 hours of battery life. The new MacBook Air with M2 chip, 13,6-inch display, MagSafe, two Thunderbolt ports and a headphone jack was presented more extensively and with a commercial. But I will go into more detail elsewhere. Only here as a teaser so much: it has Touch ID, up to 18 hours of battery life, up to 2 TB of hard drive space, a 1080p FaceTime camera and a four-speaker system. 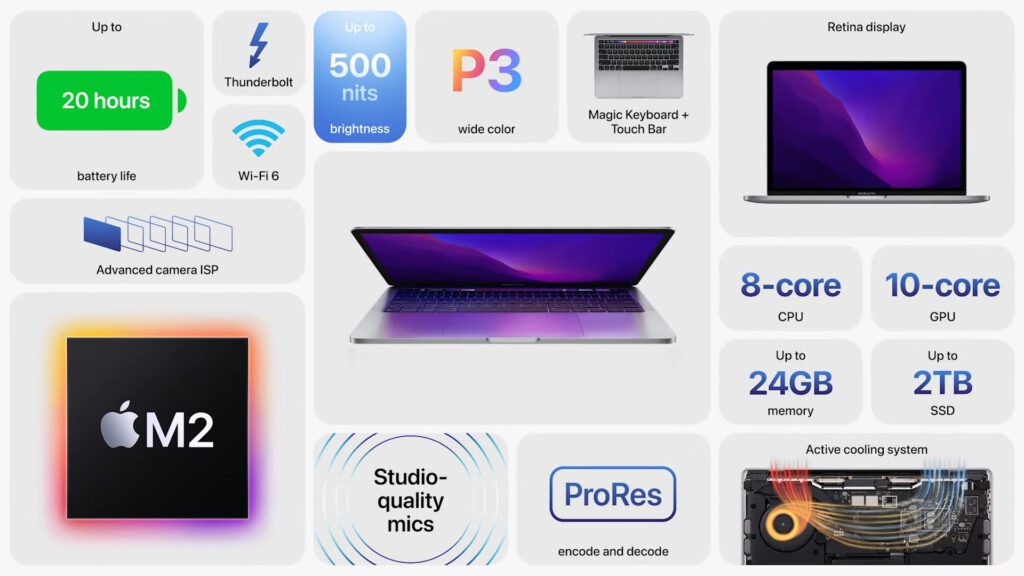 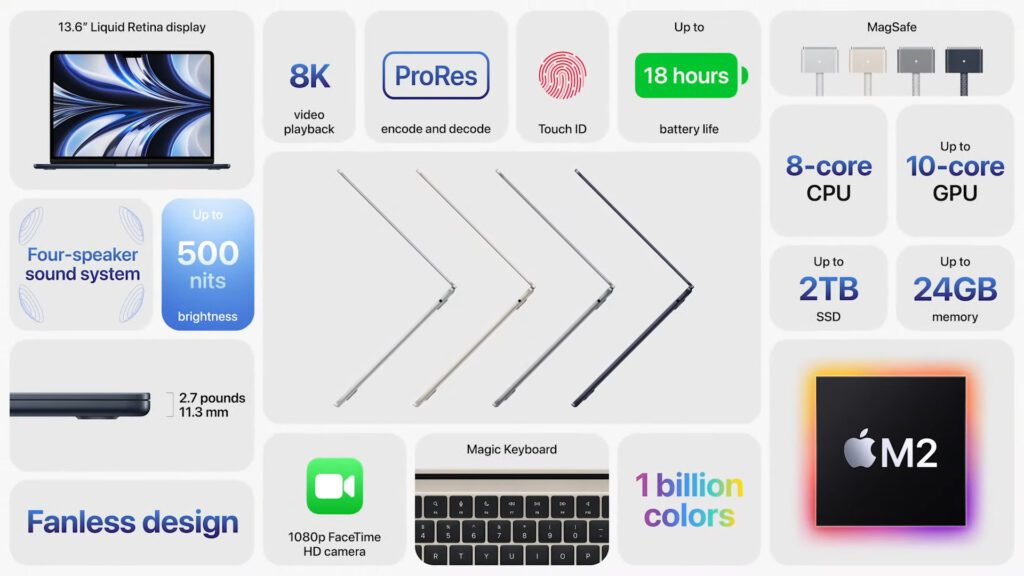 Here you can find another video player with the recording of the WWDC22 keynote: