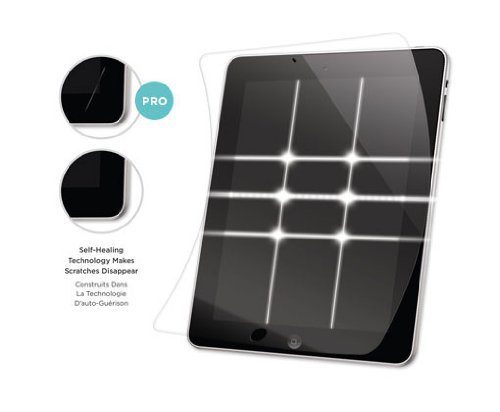 I just found out about a screen protector for the iPad Pro from Apple while browsing. At first this is nothing special, but this film is the first that I have seen that is also "self-healing" and is offered in the right size for the Apple iPad Pro. In this context, self-healing means that smaller scratches that occur in the film as a result of everyday use are "repaired" by themselves after a few hours. I explain how this works further down in the post.

The manufacturer is X-Doria, which also has other accessories for iPhone and iPad in its range: Cases, bumpers and the like can be found here. Unfortunately, there are no customer ratings yet for the iPad Pro screen protector from X-Doria - I assume that it has not been on sale long enough.

The X-Doria screen protector for the iPad Pro is self-healing, so that scratches on the film disappear by themselves after a few hours (Photo: Amazon).

Self-healing protective film - this is how it works

Basically, the trick about the self-healing protective film for the iPad display is that the plastic is not "solid". Of course, it feels like a normal screen protector, but it is still so soft that scratches in the film will disappear after a few hours. The surface closes as if it were liquid.

Physically, this works through a polymer network that "heals" itself even at low temperatures. The material properties are fully restored after self-healing, which is not so important in the case of smartphone protective films. Here, the scratch-free surface is much more important in everyday use. If you want to read more about the self-healing materials, you can here at Karlsruher Institute for Technology or at IBM (in English) read on.

For example, you can get the self-healing film from X-Doria here at Amazon.