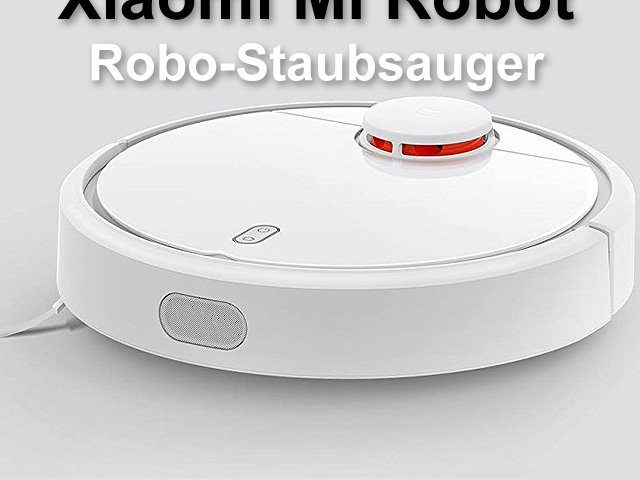 Update May 2021: Since the first version of this article four years ago, a lot has happened on the vacuum robot market. Last but not least, Xiaomi has stepped up, including with the Roborock brand. For example, vacuum cleaner robots are now on the market that not only have a mopping function, but also automatically lift the mopping attachment when they recognize a carpet as a surface. Smart! Check out more updates on the topic below;)

Before I get to the functionality, the opinions of customers, the app and other details, I would like to first list the individual technical data. Because the data sheet is usually the first step in the purchase decision - at least for those who are familiar with it:

With Mi Home App you can set up the vacuum cleaner robot and operate it via WiFi. You will find out how to integrate the Robot Vac and select it via the app in this manual. The Mi Home app is available in English, which most users should be able to use. Some test and experience reports also point to a Chinese app, for which you can, however, download an English language package. Here are the English apps I found for iOS and Android:

Now that I have some Tests and reviews of the Xiaomi Mi Robot vacuum cleaner with app control, I can summarize: the device seems to convince all users. Even the 1-star rating on Amazon reads well, but there was a defect that led to the poor rating. On the other hand, there are 14 reviews with 5 stars and very positive statements. (As of July 28, 2017)

The vacuum cleaner robot is also praised in tests outside of Amazon. One can read that he first drives the rooms on the walls or the furniture standing there. He then begins cleaning and, at the same time, precisely mapping the apartment or floor. In doing so, it safely bypasses obstacles and does not offend even at tables with chairs. Laser assisted navigation (LDS) helps a lot with this.

In the test: Inateck BP2003 Bluetooth speaker - an insider tip!

According to the individual reports and reviews, cleaning is reliable, but of course not 100% perfect, even if animal and human hair is sucked up instead of collecting in the brushes. Small corners or areas of dust collecting under the furniture as well as other inaccessible areas have to be cleaned from time to time. The vacuum cleaner cannot remove deep-cleaning vacuuming carpets or wiping tiles, laminate and the like. However, the basic cleaning of all surfaces works very well.

If you want to buy the Xiaomi Mi Robot, then you are not best advised to go to Amazon this time. Sure, delivery time, customer service, return shipping and other advantages speak for Amazon - but the price is currently included there €448while GearBest is currently using the device for €286,41 has on offer. If you choose the one in Hong Kong instead of the China warehouse, the robotic vacuum cleaner costs € 298,46, which is still less than € 300. When shipping from China you can also receive free shipping via Germany Priority Line Shipping. (All information as of July 28, 2017)

The manufacturer iRobot has with his RoombaDevice also has a smart robotic vacuum cleaner on the market. Like the product presented here, this creates maps of the rooms to be cleaned. Sensors, lasers and cameras play a role here. According to the press agency Reuters iRobot plans to sell the individual room plans (with the consent of the respective users). The potential buyers are Amazon, Google and Apple. It cannot be ruled out that Xiaomi could also sell the plans created with the Mi Robot at some point.

With the plans, the driving forces behind smart home development (including and above all Amazon, Google and Apple) could optimize their own products. The HomePod from Apple, for example, adapts its sound to the room. Other systems such as routers, lighting units, surveillance cameras, service robots and many more could also benefit from precise room plans or their average values.

Conclusion on the smart vacuum cleaner

According to the customer reviews and the statements in test and experience reports, the Xiaomi Mi Robot vacuum cleaner with app control via iOS and Android smartphone can be seen. It removes dust, dirt and hair and keeps them safe in a removable container. Control by app works via the home WiFi. The device finds its way back to the charging station itself - if it is trapped in a room or another floor, it waits at the starting point there after its work. At Amazon combined with the well-known advantages, but much cheaper at GearBest.

The Xiaomi Mi Vacuum in the test

According to the general article that you have read up to this point, there was one in 2017 Test of the Xiaomi Mi Vacuum vacuum cleaner robot here in the blog. The test report, backed by numerous photos, provides you with information on setting up and using the device. However, using the app is much easier now than it was four years ago. You will receive several screenshots of this in the test and experience report for the device presented here. Use on different surfaces is also discussed. A list of advantages and disadvantages shows you the final results of the test. However, there are now newer models - so you can read on here;)

Already at the beginning of 2018 there was a blog here a test of the successor product. In addition to a more appealing design and better vacuuming, the Roborock S50 also had a wiping function. To do this, one of the replaceable mopping cloths was attached to the underside and the water tank was filled. This fed the mopping cloth and made sure that it did not dry out at some point during use. In the linked post you will find the comparison to the predecessor by means of data sheets and photos. For example, the space-saving charging base is evident. I still find the model to be recommended today - but of course there are now, in 2021, more modern solutions.

If you are looking for the latest model of vacuum cleaner and mopping robots from Xiaomi or Roborock, then you have found it with the Roborock S7 - the contribution is available here. The Roborock S7 vacuum cleaner robot not only offers 2.500 Pa suction power, but also a new wiping technology. Instead of simply pulling a damp cloth with you, it is now actively pressed onto the floor and moved using ultrasound. This means that the floor is actively cleaned mechanically instead of just passively moistened. If carpet is recognized as a sub-floor, the wiping mechanism is raised so that the carpet remains dry.

Brushes and filters for robot vacuum cleaners from Xiaomi / Roborock

You can find a comprehensive article from 2020 on replacement products and spare parts for the Xiaomi vacuum and mopping robots with this link: Replacement filters and brushes for the Xiaomi / Roborock vacuum cleaner robots. It not only lists individual items, but also explains what to look out for when buying and when it is worth replacing the individual parts. With the tips and tricks shown, you can quickly find out whether original accessories are offered by the device manufacturer or whether you are about to buy cheap substitutes. There are also a lot of photos in the post that clearly illustrate everything.

Conclusion on the smart vacuum cleaners in 2021

In the meantime, there is not only a progressive development of the various functions that the smart vacuum cleaner robots can perform. The different models also result in different offers for all users over the years. From the simple vacuum robot to the smart mopping robot, which of course can also vacuum, everything is now included. Have a look at the featured articles that we have published since the Mi Robot. There is sure to be the right thing for you :)