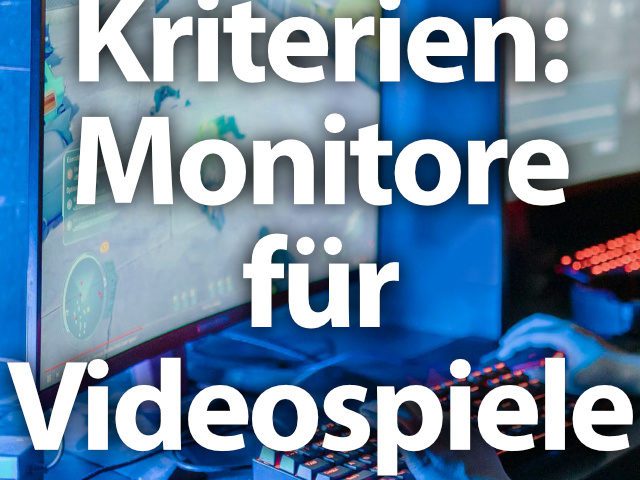 A monitor for computer games can be selected according to various criteria - size, connections, Hertz number, special functions for certain graphics cards and the like. In addition, the screen can be selected based on the preferred games or the preferred genre. With smaller indie games, the refresh rate is not as important as with shooter or racing games. In this guide you will find a few pointers for choosing the right monitor for gaming as well as further, extensive reading on an external site.

What should you look for in a computer game monitor? Here you will find information on selection criteria and further reading.

Panel technology as a criterion when buying a monitor

Before it comes to size, resolution and Hz number, one should deal a bit with the general monitor technology. Because not every screen offers the same structure and thus the same advantages and disadvantages. With the structure, we mean above all the panel that is used to display images. Depending on the technology used, there are quality points such as maximum viewing angle, color depth and contrast.

When comparing different techniques, one can distinguish between TN, IPS and VA. TN is the oldest and cheaper technology, but it does not offer good color fidelity and a comparatively small viewing angle. IPS is more accurate in terms of color and also offers a higher viewing angle, for example for several players on site. VA also offers a good viewing angle and a higher contrast than IPS. Details and exact values ​​can be found in this one Comparison from Techwatch.de.

So if you want to play the latest games with lavish graphics and be as immersive as possible, then you should take a look at IPS monitors. But these also bring other differences. The resolution of different manufacturers and models can range from Full HD with 1.920 x 1.080 pixels to 4K UHD with 3.840 x 2.160 pixels. A good compromise, which already delivers a crispy picture for immersive gaming, are monitors with 2.560 x 1.440 pixels - a 4K Monitor is often not necessary at all.

As already mentioned at the beginning, the refresh rate also plays a role Gaming monitors a major role. Anyone who plays shooters or strives to win in online multiplayer should bet on higher values. You shouldn't start below 60 Hz anyway, as many new video games support this rate. In fast games, from first-person shooters to racing games, every small movement counts, which is why monitors with 120 Hz or 144 Hz are recommended.

However, so that the images can be displayed as quickly as the inputs via mouse, keyboard and controller are received, the third value is the reaction time. This should be as small as possible. For gaming screens, models tend to be highlighted with 10 ms or less. But there are also some that promise a faster response of just 1 ms. In case of doubt, this can be decisive for the game.

The outside: screen size and connections

Screen diagonals are usually given in inches. If you want to find out which screen size suits you or which of them could fit on your table, just measure the whole thing. A monitor with a screen diagonal of 27 inches therefore measures 68,58 cm from one corner to the opposite corner. Depending on the aspect ratio of 16: 9, 16:10 or 21: 9 for an ultra-wide monitor, you can use this to calculate the height and width (or simply look at the device's data sheet).

The available connections are also not entirely unimportant. HDMI is widespread, but not as beneficial for PC gaming as you might think. A really good connection for fast, high-resolution and colorful pictures is, in addition to HDMI, for example DisplayPort. Modern graphics cards usually offer a selection of different connections, including HDMI and DisplayPort. And then there is also DVI. What the difference is and what you should use, you can find out here: Which cable do you need for a 144Hz monitor?

Even more information about 120 Hz monitors

If you are looking for the best of all worlds and, above all, a monitor with a 120 Hz frame rate, then click into the TechWatch guide linked above. There is not only a current selection of gaming models from BenQ, Dell, ASUS, Acer, Samsung and Co., but also a lot more information on the topics just touched on here. From the screen panel and the resolution to the connections and the display size to the response times and contrast, everything is represented. Sample images show what is meant by the individual versions.