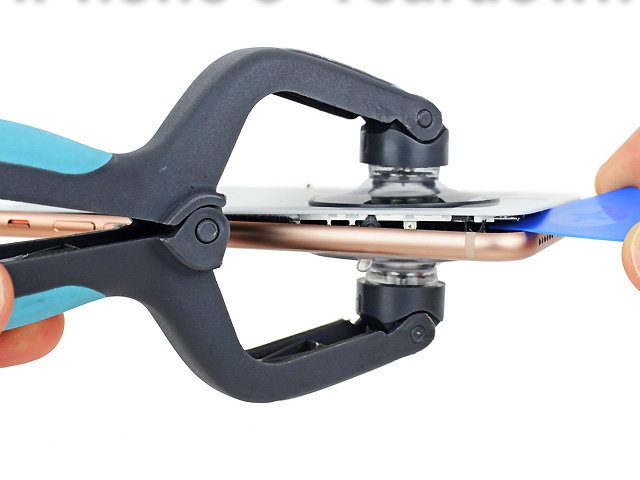 For this year's September keynote, Tim Cook and his team from Apple not only presented the Apple Watch Series 3 with cellular communications and the iPhone X, but also the iPhone 8 and the iPhone 8 Plus. The technology freaks at iFixit have now taken on the smallest of the three smartphones - or, to put it another way, they have taken it apart. So if you want to know what the iPhone 8 looks like from the inside, where which components are located, how wireless charging of the battery works and how easy or difficult it is to repair the Apple iPhone 8, then you've come to the right place. This post provides a summary of the iPhone 8 teardown and the link to the corresponding iFixit page.

The (larger) individual parts that were unearthed at the Apple iPhone 8 teardown by iFixit. Details on chips, boards, cables, screws and more can be found in the article. 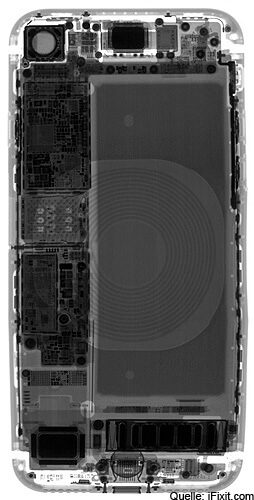 X-ray image of the Apple smartphone iPhone 8 - the induction coil for wireless charging with the Qi standard can be clearly seen.

IFixit.com praises the fact that the two most frequently exchanged elements of the Apple iPhone 8 - the display and the battery - are relatively easy to access and replace. With regard to repairs to the connections, wireless charging with the induction coil, which sits in the “back” of the smartphone, can also be positively named. Because this means that the Lightning connector on the new iPhone is not used as often. And although the tightness against water and dust gives the user an advantage in everyday life, the seals make it more difficult to open or repair the iPhone 8.

The iFixit team is not quite as positive about the glass back of Apple's iPhone 8. Because, according to Apple's Phil Schiller, this should be reinforced with steel and copper and thus be the most durable glass that has ever been installed in / on a smartphone - but it is not indestructible. In addition, the back is strongly glued to the induction coil and the associated elements. An exchange therefore requires a lot of effort, a sure instinct or the direct replacement of additional hardware.

In line with this topic: iPhone 8 cases, bags, flip cases and more

How easy is it to fix iPhone 8?

From the named side there is a value of 6/10 due to the points mentioned or listed again on the following graphic. A maximum of 10/10 would mean that the device would be super-easy to repair. 6/10 after the iPhone 8 teardown does not mean that repairs are impossible, but that some experience, special accessories and a sure instinct are required. 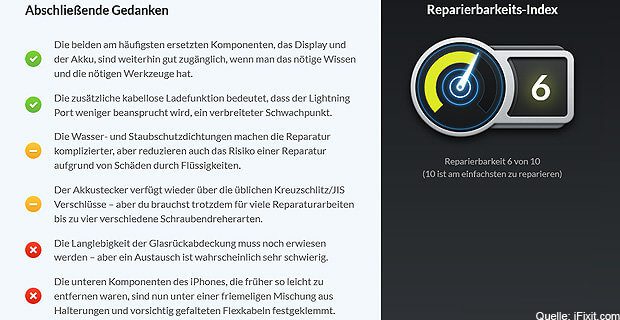 If you want to know with which chip or which module the radio signals such as Bluetooth, WLAN, FM radio and Co. are received and sent, which chip implements the LTE cellular standard and which component enables wireless charging, then you should go to visit the iFixit site and see the detailed Apple iPhone 8 teardown. How do you get there? Just click here! And yes: compared to the other chips and modules, the new Apple A11 Bionic processor seems to be the largest;)

The recap of the Apple September event can be found here

iPhone 8 teardown in the video

If you want to see the disassembly of the iPhone 8 in moving images and sound, then you can do this with the following video. Kelsea Weber from iFixit shows you which measures are necessary to open, what's in the iPhone and how well everything was screwed and glued: